This year, the global M&A market is sorting winners and losers. While 2019 first half data reached an eye-popping $1.7 trillion, the top line masks a downward trend in the number and dollar value of all but the largest deals. Wachtell Lipton Rosen & Katz and Kirkland & Ellis LLP—the top ranked M&A principals by global volume according to Bloomberg league tables—each benefited from the market split in different ways.

Global M&A, including public and private deals, saw high volume and record high average deal size in the second quarter of 2019. The aggregate global deal volume of $955 billion in the second quarter is the highest quarterly volume since the same quarter last year and ranks among the top three quarters since the spike in the fourth quarter of 2015.

Mega deals totaling $748 billion represented 44% of global deal volume in the first half of 2019. A majority of the largest targets were in the United States. Aggregate global mega deal volume for the first half of 2019 has already surpassed full-year 2017 and is close to passing 2018. If mega deals continue to be announced at this pace for the remainder of the year, 2019 could be a record year for mega deals. But mega deals don’t tell the whole story. 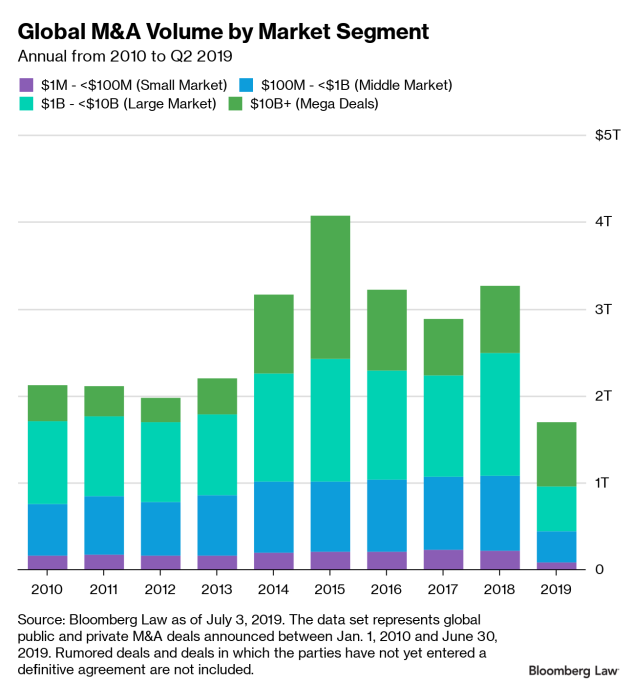 While second quarter middle market and large market volumes were up 25% and 30%, respectively from the first quarter, they are not on pace to match 2018 year-on-year. In fact, the middle ($100 million to $1 billion) and large ($1 billion to $10 billion) markets are having their worst first half of any year since 2013. Middle market deal count and volume are down by 15% and 13%, respectively, compared to last year. 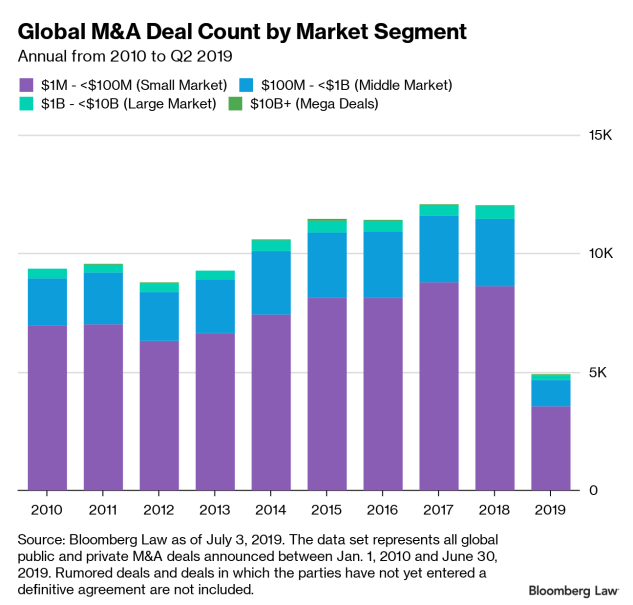 By deal count, the large market is doing just as poorly: only 198 large deals were announced on a global scale in the first half of 2019, the lowest combined large market deal count for any first half-year since 2013.

While mega deal dollars are contributing to high overall volume, the rest of the market is contracting. How is this development impacting M&A legal practices?

Wachtell Lipton Rosen & Katz and Kirkland & Ellis LLP were the first and second ranked global M&A law firms by volume according to Bloomberg’s Global M&A Market Review for the first half of 2019. Wachtell served as principal advisor to transactions worth $437 billion and Kirkland came in second with $331.2 billion. In distant third place, Skadden Arps Slate Meagher & Flom LLP advised on $180.4 billion in deals. 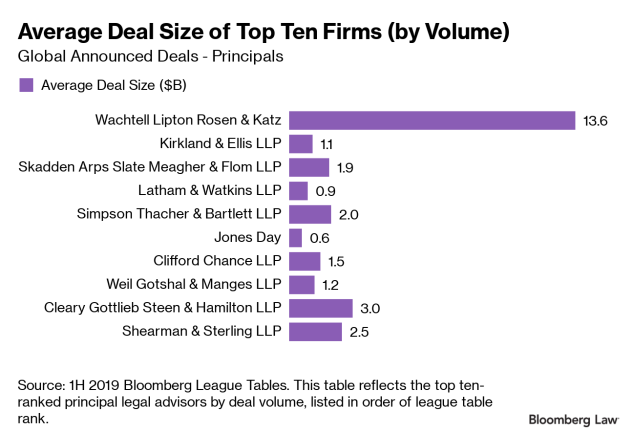 But the secret sauce—the particular deal style—of each law firm is encoded in deal count and average deal size.

It is no surprise that during a mega market boom, Wachtell, a firm with an average deal size more than ten times higher than any other law firm worldwide, is the top ranking by volume. Wachtell achieved this status while advising on only 32 transactions—the lowest deal count of the top ten global volume firms. In fact, Wachtell doesn’t even make it into the global rankings by deal count.

Kirkland, meanwhile, has managed to thrive by operating a deal machine, advising on almost ten times more deals than Wachtell, 292, winning it first place on all the global rankings by deal count. Kirkland’s average deal size of $1.1 billion places it right at the cusp of the middle and large markets. 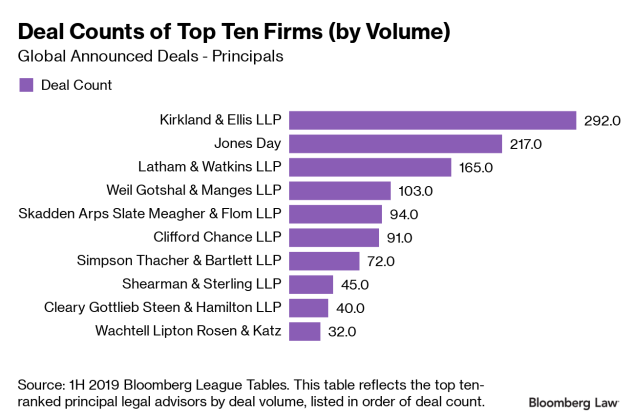 Another notable winner in a slow middle market in the first half of the year was Jones Day, which ranked sixth for global volume despite its low average deal size of $600 million. Jones Day achieved this high total deal volume by handling an impressive 217 deals, the second highest number of global deals after Kirkland. Jones Day ranked third for global deal counts.

In the first half of 2019, for both the global mega market standing alone and the aggregate of all market segments in cross-border deals, deals involving targets in the consumer, non-cyclical sector have had the highest total volume of all industry sectors. 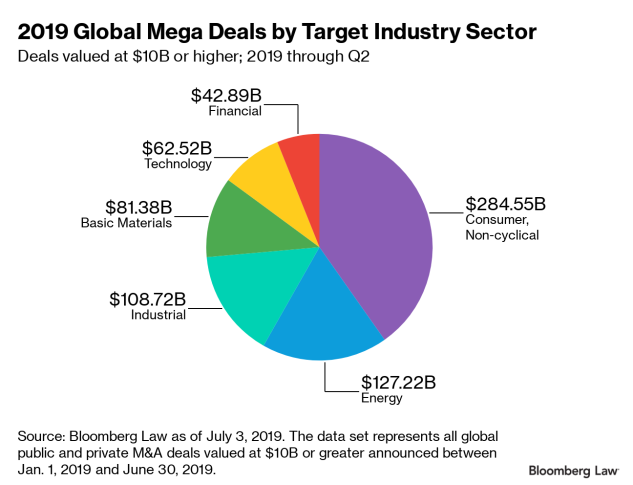 U.S. mega deals in the pharmaceutical industry, including the Celgene-Bristol-Myers Squibb and Allergan-AbbVie deals, and the payments industry, such as the Worldpay-Fidelity National and First Data Corp-Fiserv deals, have had a major impact on the sector, which has seen a total of $285 billion mega deals this year. The same sector comes out on top for cross-border deals. 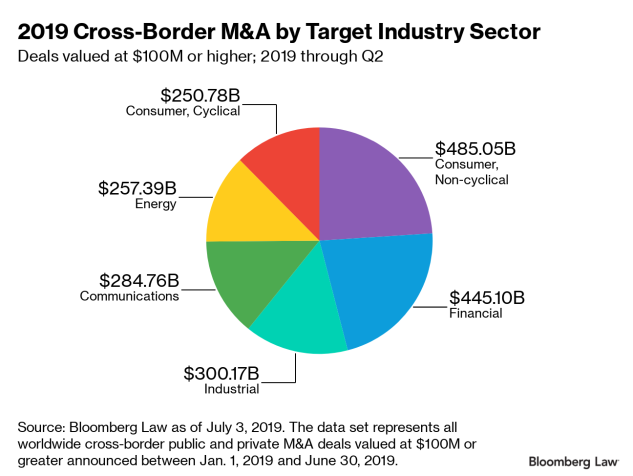