The halcyon days for SPACs may be receding. Traditional IPOs continued the market leadership that they re-established over special purpose acquisition companies in the second quarter. Even more concerning for SPACs are a market pivoting toward value over risk and a great many existential challenges owing to the current SPAC glut and dearth of suitable target companies. There is a growing prospect that a high percentage of SPACs will fail. 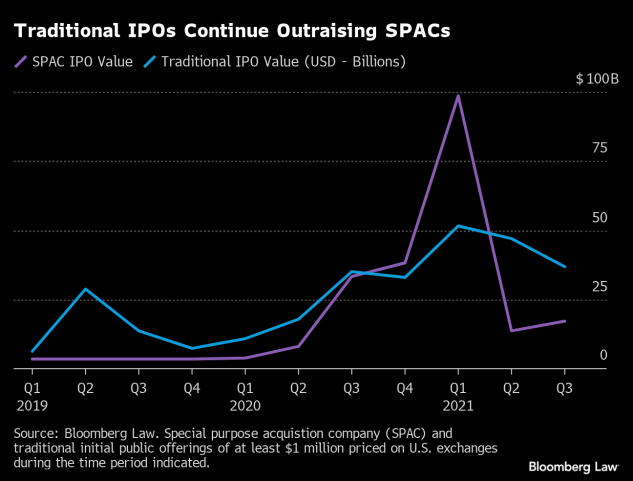 Indeed, experts such as blank-check sponsor Betsy Cohen predict a 30% SPAC failure rate, while University of Florida finance professor Josh Ritter believes half of SPACs may liquidate after failing to secure a deal acceptable to shareholders within the time afforded, typically 18 to 24 months from inception.

Should those forecasts prove correct, widespread SPAC liquidations ought to dampen SPAC IPO interest, particularly from retail investors who may have purchased shares in the market at prices higher than the IPO offer price, meaning they would be refunded only a fraction of their actual investment.

Direct listings have not yet become a widely used alternative to traditional IPOs in the way SPAC IPOs have, but their acceptance appears to be deepening—particularly in technology. Mobile analytics vendor Amplitude went public via a direct listing, as did well-regarded online eyewear retailer Warby Parker.

Neither Amplitude nor Warby Parker chose to take advantage of liberalized direct listing rules permitting a company to raise capital for itself when conducting a direct listing that registers the shares of existing shareholders.