US Securities and Exchange Commission
www.sec.gov

On at least nine occasions, companies have claimed a legal basis exists for excluding these proposals from their proxy statements, and they’ve sought non-binding “no-action letters” from the SEC’s Division of Corporation Finance. 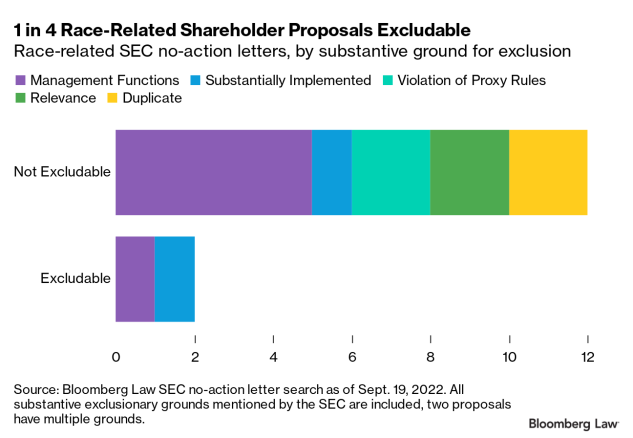 In January, the SEC said that there was a substantive basis (substantial implementation under Rule 14a-8(i)(10)) for Starbucks Inc. to exclude a civil rights and non-discrimination audit proposal from the National Center for Public Policy Research (NCPPR) based on the company’s public disclosures.

In March, the SEC indicated that American Express Co. has a substantive basis (management functions under Rule 14a-8(i)(7)) for excluding an NCPPR civil rights audit because it required disclosure of intricate employment and training practices.

3. No two race-related proposals are alike (yet).

Thus far, the SEC hasn’t allowed companies to exclude race-related proposals alleged to be too alike.

Johnson & Johnson and Amazon.com Inc. sought to prevent race-related proposals from reaching proxy materials because they were allegedly similar to ones the companies had already received. J&J received a proposal for a racial equity audit and a racial justice audit proposal (which was approved by shareholders), while Amazon received a proposal requesting a report on racial and gender disparities at the company and a racial equity audit proposal received the year prior. Although all proposals were based on DEI initiatives, the SEC said they were not excludable under Rule 14a-8(i)(11).

Bloomberg Law subscribers can find related content on our ESG Practice page, as well as our Practical Guidance: Shareholders page.