With unions continuing to gain traction against a backdrop of tight labor markets and job dissatisfaction, it’s no wonder that 2022 was a busy year for labor unrest. But still, it’s pretty astonishing to see just how busy unions have been.

Here are three year-end statistics, mined from Bloomberg Law’s database of work stoppages, that help reveal the scope of union strike activity in 2022.

Unions initiated 314 strikes against employers in 2022, according to preliminary statistics from the database. It’s the first time strike totals have topped the 300 mark since 2005. 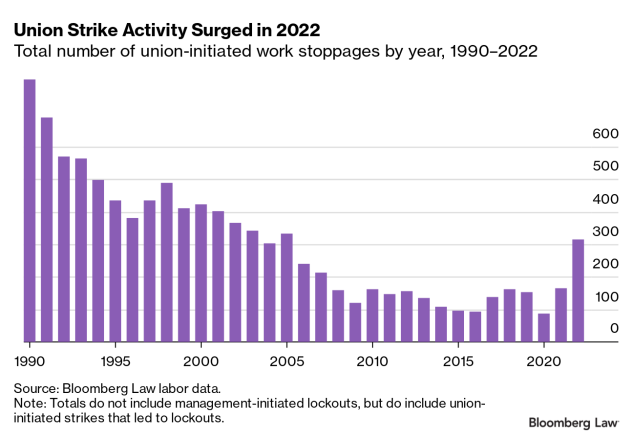 The 91% increase from 2021’s total of 164 strikes is the largest one-year escalation in at least 30 years. And although it’s too soon to say whether this signifies a reversal of a decades-long downward trend, it’s worth noting that strike totals have now increased in four of the last six years.

The most heavily besieged employer in 2022 was clearly Starbucks, which faced at least 107 union-initiated strikes. But take away that bunch, and the remaining 207 non-Starbucks strikes still make 2022 the biggest year on the picket lines since 2007. 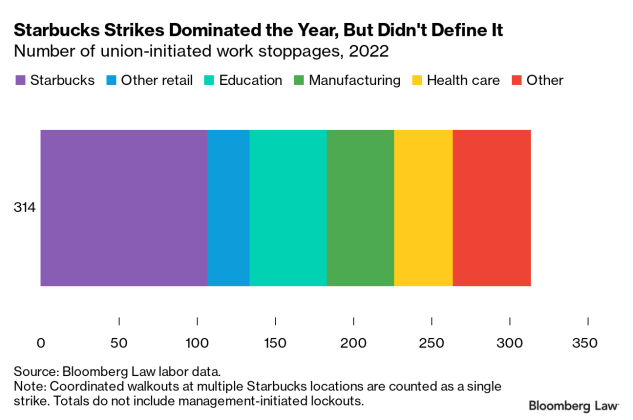 These figures show that this surge in union unrest can’t be attributed to workers in a single company—or in a single industry. It’s a multifaceted phenomenon, with workers in education, manufacturing, health care, and plenty of other workplaces playing a major part.

An All-Time Low for Lockouts

Was anyone not calling work stoppages in 2022? Yes: employers.

Only three management-initiated lockouts took place in 2022, which—with the exception of pandemic-stunted 2020—is the lowest total in Bloomberg Law’s records. (An additional four lockouts were triggered by worker-initiated strikes.) 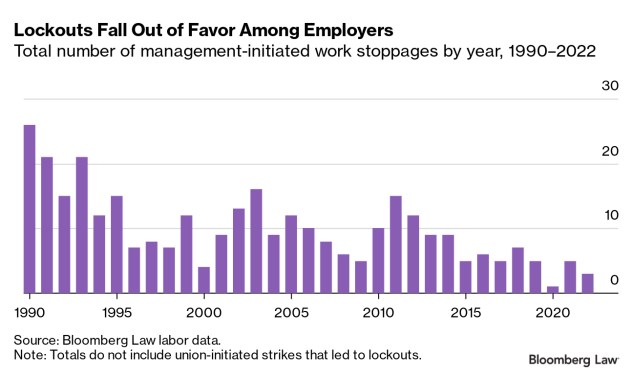 Lockouts typically rise and fall in sync with strikes, albeit on a much smaller scale. But in 2022, practically all of the action was on the labor side of the equation. The only ones idling workers were the workers themselves.

As 2023 starts off with a big new strike action, the takeaway from these 2022 stats is clear: Unions aren’t just resuming their old pre-pandemic strike patterns. They’re creating bold new ones.