Snowflake Inc. signage is displayed on a laptop computer in an arranged photograph taken in the Brooklyn borough of New York, U.S., on Wednesday, Sept. 16, 2020. Snowflake Inc. soared in a euphoric stock-market debut that transformed the eight-year-old software company into business valued at about $72 billion.
Photographer: Gabby Jones/Bloomberg

The IPO market’s third-quarter results blew the doors off both convention and expectations. Led by the record-setting SPAC IPO Pershing Square Tontine and Snowflake, the biggest software IPO ever, the IPO market surprised and astounded. Against a worldwide pandemic, deepening recession, and summer vacations, the market had its best quarter by deal count since fourth-quarter 1997 and its highest quarterly deal value ever. IPOs raised $65 billion, surpassing by more than $20 billion the previous record of $44.7 billion set in fourth-quarter 1999. 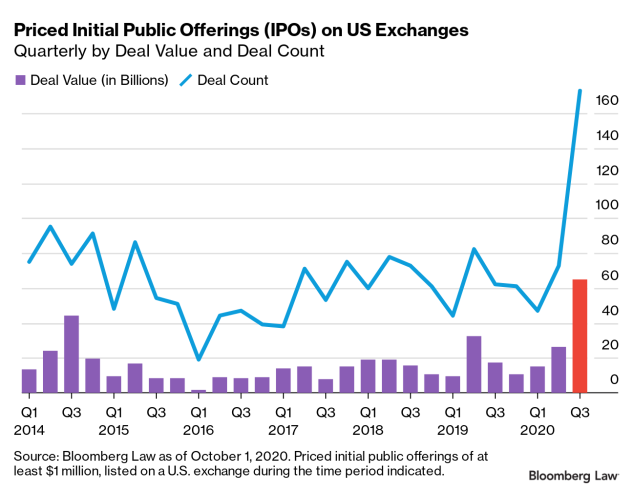 Unconventional Offerings in a Nontraditional Quarter

Those hefty numbers do not even include unicorns Palantir and Asana. Their secondary direct listings raised no company capital and so are difficult to compare to capital-raising traditional IPOs. These direct listings are only the third and fourth significant direct listings in the U.S., after Spotify in 2018 and Slack in 2019.

The market for SPACs is so frothy that SPAC IPOs have reached parity with traditional IPOs, an event few thought would happen so soon, if ever. Comparing their results to other industry sectors, SPACs (diversified) have ascended from benchwarmer to all-star. As recently as 2014, diversifieds raised only $753 million on 8 deals but this year have come to dominate. Over the first three quarters of 2020 alone, the diversified sector raised $44.2 billion on 119 deals, far outpacing any other sector. 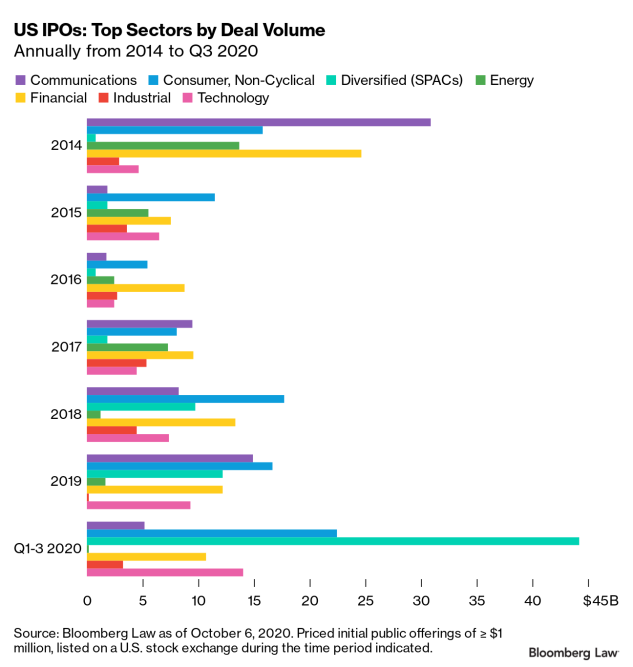 The mania is also heating up the M&A space, since SPACs need to find a merger deal after their IPO. With so many SPACs raising war chests of hundreds of millions to billions of dollars each, they are likely to significantly affect the M&A market in the years to come.