The Petco application on a smartphone arranged in Hastings-on-Hudson, New York, U.S., on Monday, Jan. 4, 2021 A booming market for U.S. initial public offerings shows no sign of slowing in 2021. Petco filed for an initial public offering and will trade on the Nasdaq under the ticker WOOF.
Photographer: Tiffany Hagler-Geard/Bloomberg

Driven by the relentless pounding of SPACs racing to go public, the IPO market pulverized any notion that past records hold any sway over the current market zeitgeist. The traditional IPO market posted very strong results while the increase in SPAC IPOs defied gravity—and possibly credulity.

A look back at 30 years of data provides some perspective. The current heady market—reminiscent to some of the dot-com boom years of the late 1990s—is actually a different breed of animal, even if the investor euphoria has felt similar. That earlier bull market was driven by technology stocks; today, it’s blank-check companies that are leading the pack. 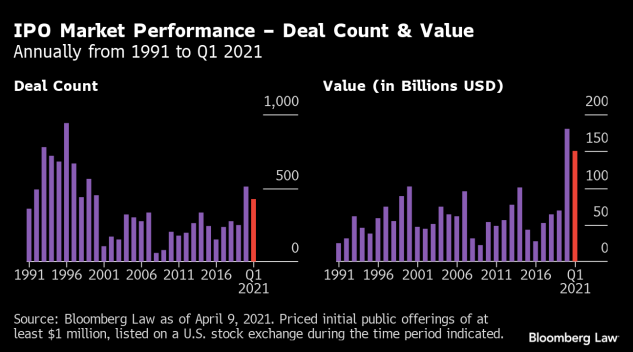 Annual deal count today remains lower than in the dot-com era. This year has started so hot, however, that even the massive deal count records set more than 20 years ago may finally fall to the current frenzy. In just three months of this year, 428 IPOs were completed. That is approaching double the pace needed to best the annual all-time high count of 941 deals set in 1996. Few records appear safe in this market. 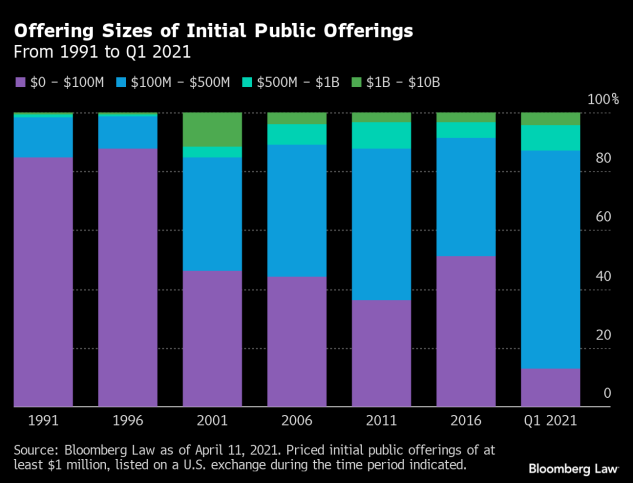 More evidence that this market is different can be seen in the deal value chart. The capital raised by IPOs in 2020 exceeded the previous all-time high year of 2000—by 76%. The fourth quarter added nearly $150 billion to last year’s total of $180 billion raised.

Nine of the 10 Largest Q1 IPOs Were Not SPACs

The first quarter brought a number of big names into the ranks of public companies. The largest IPO was by South Korean e-commerce giant Coupang, followed closely by a new mutual fund from BlackRock. Those IPOs are the the biggest on a U.S. exchange since Uber raised $8.1 billion in 2019. Coupang raised over $4.5 billion and the BlackRock Innovation and Growth fund raised $4.4 billion. Dating app Bumble raised nearly $2.5 billion, making it the third-largest IPO of the quarter. Digital customer experience solutions provider Telus also went public, raising over $1 billion, and retail pet food and supplies heavyweight Petco raised $993.6 million in its initial public offering. Only one SPAC, Soaring Eagle Acquisition Corp, broke into the quarter’s top 10 for IPO value. 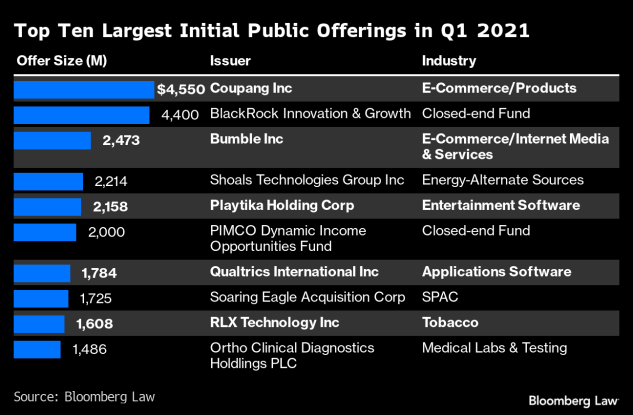 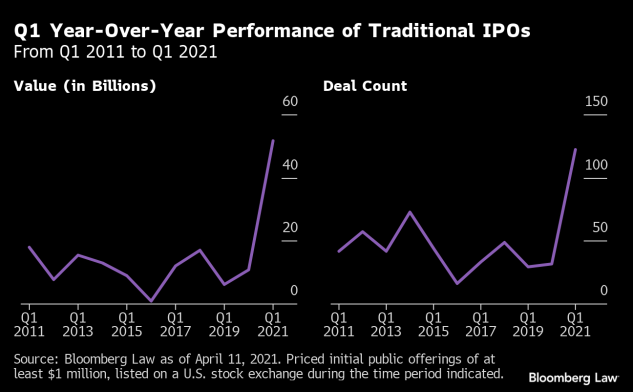 Since the second quarter of 2020, traditional IPOs have increased in both deal count and value in much the same nearly-vertical trajectory as upstart SPACs. The number of traditional IPOs nearly quadrupled, from 32 in Q1 2020 to 122 last quarter. The rise in capital raised was even more impressive: Total deal value rose from $10.9 billion a year ago to $51.5 billion in the most recent quarter—an increase of over 370%.

The U.S. IPO factory slowed significantly at quarter’s end, and has continued at that diminshed pace into April—traditionally a slower time for the market. IPOs, as measured by the Renaissance IPO Index, were down 15% Friday since their high on Feb. 12, and the Indxx SPAC & NextGen IPO Index was down 23% on Apr. 9 from a high on Feb. 16.

There are signs of weakness in the global IPO market, too. Deliveroo’s huge IPO sank 31% almost immediately in its London debut, triggering circuit breakers. Hong Kong suffered through its worst IPO performance since 2018 as China fintech firm Bairong flopped on its opening day. Government stimulus around the world, rising bond yields, and a shift in investor focus away from pandemic-beneficiary businesses are hurting IPOs. Nevertheless, the quality of the traditional IPO pipeline in the U.S. remains very good, which ought to provide plenty of support for the market over the near-term.

Ominously for SPACs, almost every public, pre-merger SPAC is now trading below its IPO offer price: usually $10 a share, despite all shareholder money held in trust. Trading below redemption value indicates concern among investors about a SPAC’s prospects to secure a successful merger. With so many SPACs chasing merger deals, the number of SPACs forced to liquidate because they failed to consummate a merger during the typical two-year time limit is likely to increase. One expert, University of Florida finance professor Jay Ritter, estimates that half of SPACs will eventually need to return investor money.

If that forecast is accurate, it portends a reckoning in the SPAC IPO market.

Bloomberg Law subscribers can find related content on our new In Focus: Special Purpose Acquisition Companies (SPACs), on our Equity Deal Analytics, and on our Securities Practice Center resource.