SPACs began to cool off, and cool off quickly, after the SEC expressed a range of concerns about the investment vehicle. The number of SPAC IPOs fell 79% from the first quarter to the second. The value of those SPAC IPOs dropped by over $84 billion, a decrease of more than 86%. 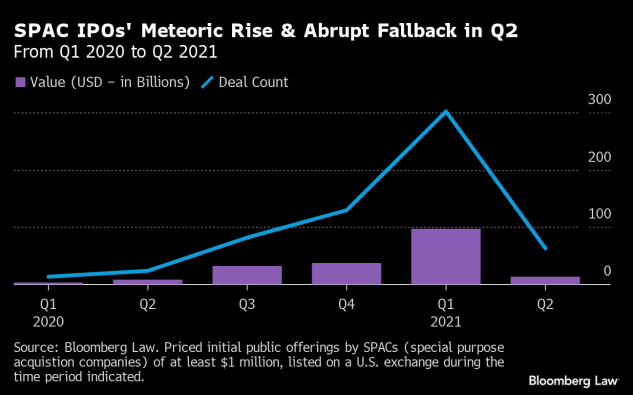 What did the SEC do? In addition to statements regarding the accounting of SPAC warrants, a feature beloved by early investors, the SEC also issued a warning to retail investors that addressed celebrity endorsements and optimistic projections, among other things. Hype from celebrities has led ordinary investors to purchase shares without fully understanding what they were buying or the risks involved, including potential high fees charged throughout a SPAC’s lifecycle. Retail investors can later be wowed by post-merger SPAC projections—which are not allowed in IPO registration statements—made to attract shareholder approval for a proposed de-SPACing deal. (De-SPACing deals are generally mergers by the SPAC into an operating company.) 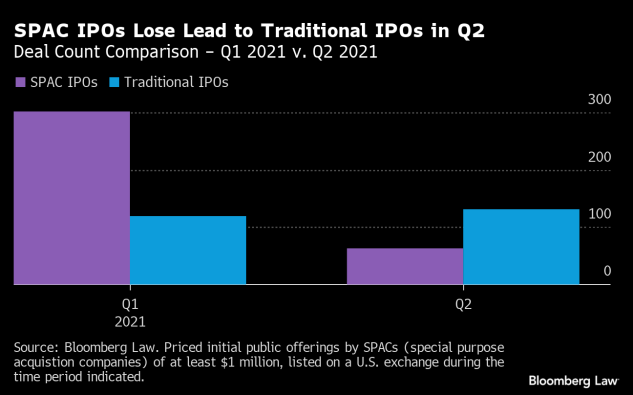 SPAC IPOs led the first quarter IPO market with 302 priced deals (71.6% of all IPOs), raising $98 billion (65.2% of capital raised). In the second quarter, SPACs declined to 63 deals (32.5% of all priced IPOs) totaling $13.5 billion in raised capital (22.3% relative to all IPOs) and handed back the IPO market crown to traditional IPOs. The ratio between traditional IPOs and SPACs has returned to something closer to the previous norm of SPACs representing around 20% of initial public offerings.

The pipeline for traditional IPOs has benefited from recent SPAC stumbles. The launching of fewer SPACs, numerous reports of de-SPACing problems, and poor post-merger performance experienced by existing SPACs have built a case for companies choosing the traditional path to going public and for fund managers to choose investing in traditional IPOs over PIPE funding for SPACs. More slender offer size is also helping keep investor interest healthy.

Traders are expecting increasing volatility in the third quarter—and volatility is a market condition that typically increases the attractiveness of SPAC IPOs relative to traditional offerings.

If SPAC IPOs get hot again, the IPO market overall would likely benefit.