Currently, most categories of deals—whether grouped by target industry, region, consideration type, or deal structure—are down compared to where they were in last year’s booming mergers and acquisitions market. But deals involving software or real estate investment trusts (REITs) seem to be defying gravity. 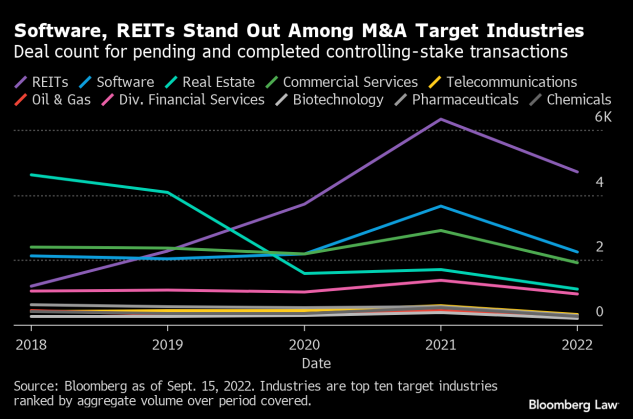 Over 2,200 controlling-stake deals involving software targets with an aggregate value of $302.9 billion have been announced this year, already surpassing 2021’s full-year volume of $284.9 billion for this subset of deals. Today’s announcement of Adobe Inc.‘s agreement to acquire Figma Inc. for $20 billion pushed software’s volume this year past last year’s volume. Software’s YTD deal volume has also been significantly bolstered by two mega mega deals—the $67.8 billion acquisition of Activision Blizzard Inc. by Microsoft Corp., and the $70.4 billion acquisition of VMware Inc. by Broadcom Inc.—both of which remain pending. 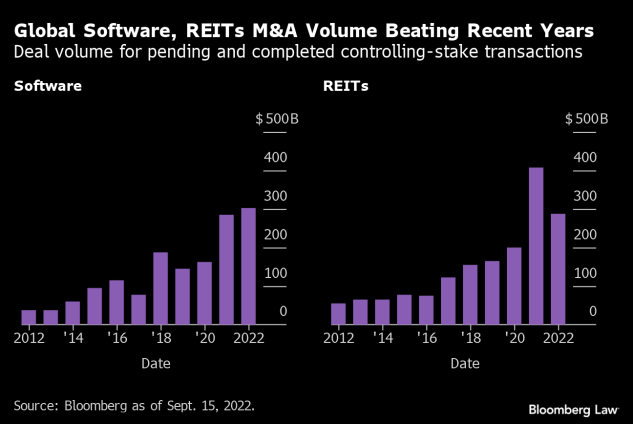 By aggregate dollar volume, both the software and the REIT industries have seen a percentage increase over the same period last year, and are having a buoying effect on their respective sectors.