In Silicon Valley—including its current coast-to-coast remote-work extensions—mergers and acquisitions and investment activity are robust and setting records.

Following deal activity in the center of the tech world can give us a general sense of how the sector is doing overall, and it can provide hints as to what individual companies are betting on. But deal activity can also signal brewing economic and geopolitical trends, as we have seen with the volatility around semiconductors since the start of the pandemic. (More on that below.)

The Highest Deal Activity on Record

The number of M&A and investment deals involving the 150 largest publicly traded tech and life science firms in Silicon Valley (ranked by 2020 revenue) on the 2021 Fenwick–Bloomberg Law SV 150 List climbed to a record high in 2020. This result is the region’s highest total deal count ever, according to Bloomberg data. It is in line with 2020’s deal count for all global M&A acquisitions involving technology targets, which also reached the highest annual deal count for any year on record. 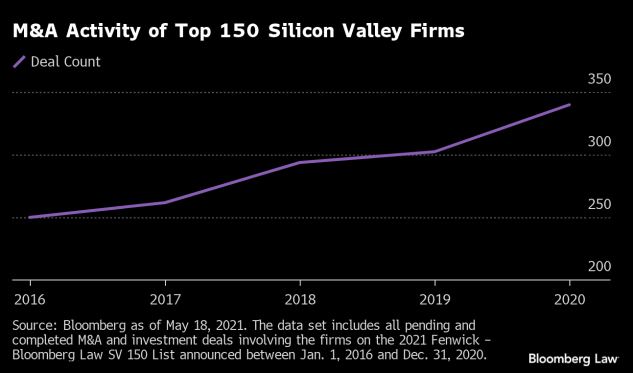 Google Is the Top Buyer in the Valley

In both 2020 and in 2021 so far, Google’s parent Alphabet Inc. has been the most active acquirer and investor among the all firms on the Fenwick–Bloomberg Law SV 150 List. And Google taking this top buyer crown is nothing new. 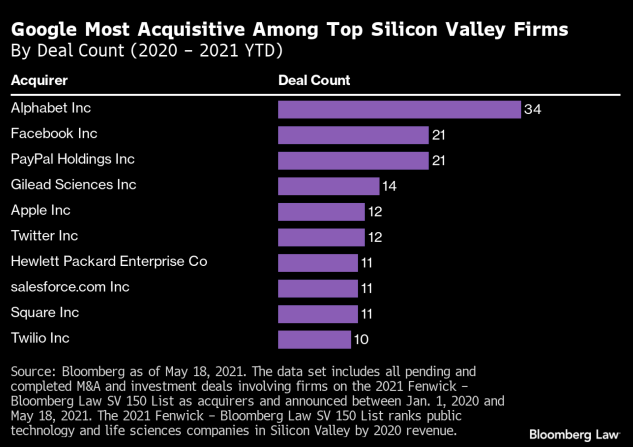 Since the start of 2020, Alphabet Inc. has been the acquirer/investor in nine currently pending or completed M&A deals and 25 investment deals, almost all of which were venture capital fundings. Facebook Inc. (11 M&A deals, 10 investments) and PayPal Holdings Inc. (3 M&A deals, 19 investments) came in next with 21 deals each as acquirer.

Google’s acquisitiveness certainly stands out among the top Silicon Valley firms—and, for perspective, it even beats out some other big tech companies outside the valley. For the same period, for example, Washington state-based Amazon Inc. was acquirer in four fewer M&A and investment deals than Google, and fellow Washingtonian Microsoft was the acquirer in 15 fewer.

But where Google stands out the most is among the other top-five SV 150 firms. Though Apple Inc. takes the No. 1 spot on the 2021 SV 150 list by revenue, it takes fifth place on the top buyers list with less than half the number of transactions as Google. 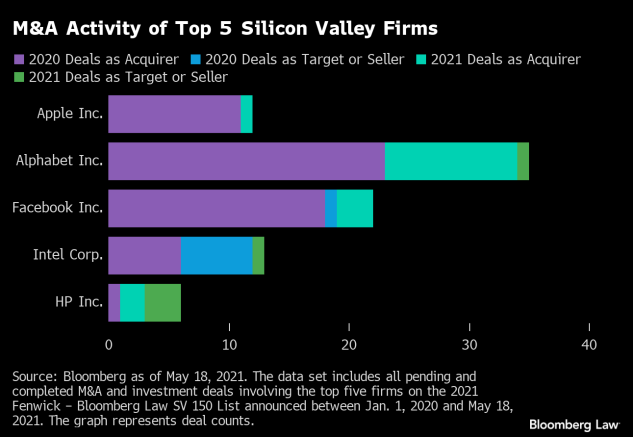 Fourth- and fifth-ranked Intel Corp. and HP Inc.—both of which have been involved in more deals as the seller as opposed to the acquirer than the other top-five firms—don’t make it into the top buyer rankings.

Note: Almost half (208) of the 476 deals in this data set of pending and completed deals involving SV 150 firms did not disclose financial terms, which is why we are relying on deal counts, as opposed to deal volume, as a gauge of activity.

What Are the Top Firms Buying?

What are the top firms buying? A lot of software. While SV 150 firms have pursued investments in a variety of industries, from advertising to transportation, the most common target industry since the beginning of last year has been software. Of all 413 deals involving an SV 150 firm as an acquirer announced between Jan. 1, 2020, and May 18, 2021, nearly half (202) involved targets in the software industry, with 111 of those in the applications software subgroup.

And the same goes for Silicon Valley’s top buyer. Google’s 34 M&A and investment targets since the start of 2020 have represented a wide range of tech and non-tech industries, but—like the SV 150 overall— applications software was its most common target industry (eight deals), followed by computer software and advertising services (each with four deals).

Of Facebook’s 21 deals in which it was an acquirer during the same period, more than half involved software targets.

Chip Companies in the Spotlight Amid Crisis

The 15 members of the 2021 Fenwick–Bloomberg Law SV 150 List that are in the semiconductor industry now find themselves at the center of a worsening chip supply crisis. The 2021 SV 150 rankings of these semiconductor firms—which exhibit a drastic reshuffling, including some precipitous falls and impressive climbs by companies—are indicative of the wild year they had last year. In 2020, the semiconductor industry saw a record volume of M&A activity, but it also experienced the onset of the ongoing shortage spurred by the pandemic. 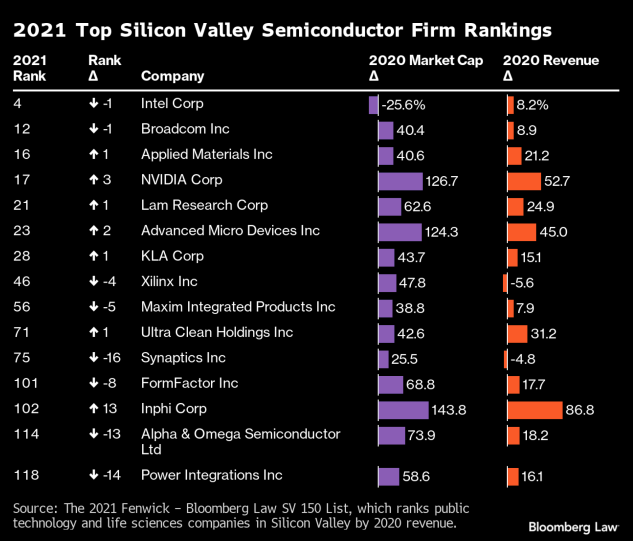 Now Silicon Valley’s top firms, including Google, Cisco Systems Inc. and others, through the Semiconductors in America Coalition, are urging Congressional leaders to support the CHIPS for America Act, which was introduced last summer. This effort on the part of tech companies has resulted in the addition of $52 billion in proposed funding for domestic chip-makers to draft legislation this week, which could pass into law as soon as this month and result in “a historic and immediate infusion of federal money.” If this funding comes through, there will likely be even more activity in this space in the months ahead.