With national attention once again fixed upon large-scale work stoppages—both narrowly averted and fully facilitated—the calendar’s advance into autumn has many employers wondering the same thing: Are we on the verge of another big spike in union unrest, just like we experienced last October?

It’s a fair question, but a misguided one. The truth is, the ramp-up that began last fall, in what many labor watchers dubbed “Striketober,” never ended. Even 11 months later, it’s still Striketober. 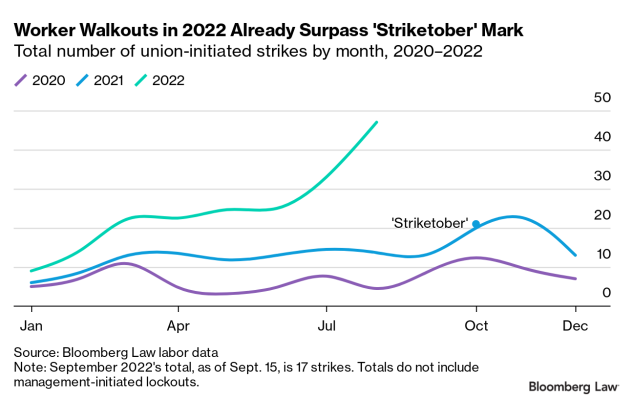 In pandemic-ridden 2020, strike activity sat at an all-time low. After workplaces started reopening in the spring of 2021, unions returned to the low-teens monthly totals that had been typical of previous years. But in October and November, kicked off by large, high-profile walkouts, strike totals jumped into the twenties. And, after the expected seasonal winter doldrums, they’ve only gone up from there.

In fact, beginning in March, every month of this year has matched or bettered Striketober in terms of strikes called. In August alone, 47 strikes were called. (September’s total, as of Sept. 15, is 17.)

This rising tide of unrest is flipping the script on historical labor trends. As of Sept. 15, 213 strikes have been reported in 2022 already, according to Bloomberg Law’s labor data. It’s been 15 years since unions last reached that mark. And we haven’t even gotten to October yet. 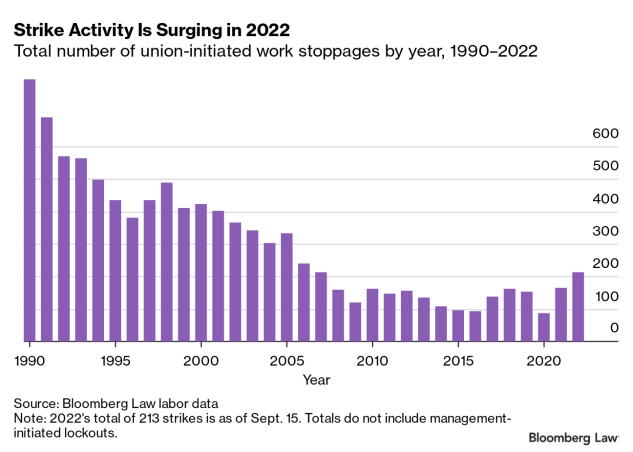 The fourth quarter is a traditionally busy time for strikes. Because most events arise from contract renegotiations, and because negotiators seldom schedule bargaining sessions during the summer vacation months, there’s a high probability of autumn impasses that can lead to picketing—especially before the weather turns cold.

Indeed, Bloomberg Law’s database of contract expirations currently identifies no fewer than 424 private-sector contracts that are set to expire in October alone.

With that kind of traffic ahead, there’s no reason for employers to think that the conditions that created Striketober last year won’t continue to do the same—or worse—this October and beyond.