Securities and capital markets lawyers disagree strongly about whether in-house counsel or law firms are better suited to perform certain tasks, according to results of Bloomberg Law’s recent survey of lawyers in those practice areas. While the survey details much agreement among practitioners, it also reveals several areas that may benefit from deeper conversation between companies and their outside counsel.

Law firm and in-house attorneys generally agree about whether certain transactional and regulatory tasks most common in capital markets and securities practices should be completed in-house or externally. But due diligence request lists, terms sheets, ancillary agreements, and closing checklists bring out the most divergent views.

The table below charts some common securities lawyer tasks and identifies the levels of agreement or disagreement about whether a particular task is best completed by a law firm attorney or by in-house counsel. 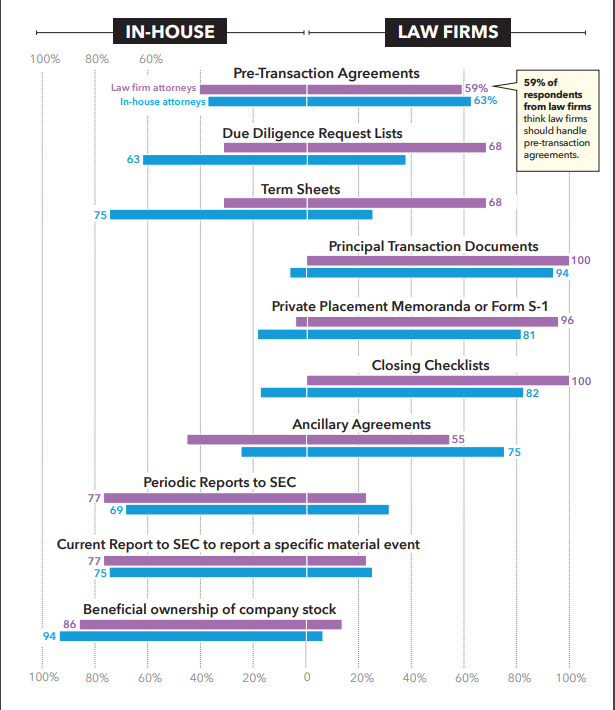 The survey results do not show lawyers trying to monopolize work on every type of task securities lawyers perform. Rather, the survey presents a thoughtful portrayal of securities lawyers and how they go about their jobs. Perhaps surprisingly, it even found that there are some tasks that law firm counsel would more readily assign to their in-house counterparts than to themselves.

Respondents Agree on Roles—Except When They Don’t

Law firm attorneys overwhelmingly see due diligence request lists (68%) and term sheets (68%) as duties within their purview, while 62% of in-house respondents said they would keep due diligence lists in-house—and a full 75% of them view preparation of term sheets as a task for in-house counsel.

Less dramatically, substantially more outside counsel said they would assign themselves securities offering documents (a margin of 15 percentage points for SEC Form S-1 registration statements and private placement memoranda). For closing checklists, an astounding 100% of law firm attorney respondents would give the work to themselves versus 82% of in-house counsel choosing to assign that work to outside attorneys.

The strongest consensus fell upon two tasks both camps of attorneys would assign to the same type of attorney. There was near-perfect alignment among both in-house counsel (75%) and law firm attorneys (77%) regarding how many would assign Form 8-Ks (a type of filing companies make with the SEC to report an unscheduled specific material event) to in-house lawyers. These survey attorneys were similarly closely split regarding pre-transaction agreements, with 59% of law firm attorney respondents and 63% of in-house counsels leaning toward awarding the work to law firms.

For ancillary agreements, there was about a 20-percentage point disparity between the two groups, although majorities of both the law firm and in-house respondents favored those agreements being completed by in-house lawyers. Even closer were the opinions on beneficial ownership filings, with 86% of law firm lawyers and 94% of in-house counsel viewing that task as best done by in-house attorneys. Curiously, 77% of law firm respondents would assign preparation of periodic SEC reports (e.g., Forms 10-Q and 10-K) to in-house counsel, given the choice, versus somewhat fewer (68%) in-house counsel.

Taken as a whole, the survey points to a number of specific areas of opportunity for securities and capital markets lawyers, whether working in a law firm setting or in a corporate legal department, to optimize their legal work flow and work distribution through better communication. By having a forthright discussion with their counterparts about their respective capabilities, needs, and expectations for accomplishing the work at hand, both parties can improve their internal work flow while strengthening their professional relationships and eliminating potential struggles before they start.

Future Legal Work to Tilt in Favor of In-House Counsel?

Looking forward to the next five years, attorneys leaned toward more public company work being in the pipeline. Among respondents, 21% predicted “somewhat” more work for public companies, versus 14% foreseeing “somewhat"-to-"much more” legal work from private companies. A majority of 64% expected the mix to stay “about the same.”

Nearly 85% of survey respondents agreed that the IPO and private placement memorandum process is a positive collaboration between the company and outside counsel. The remaining 15% held a neutral view. 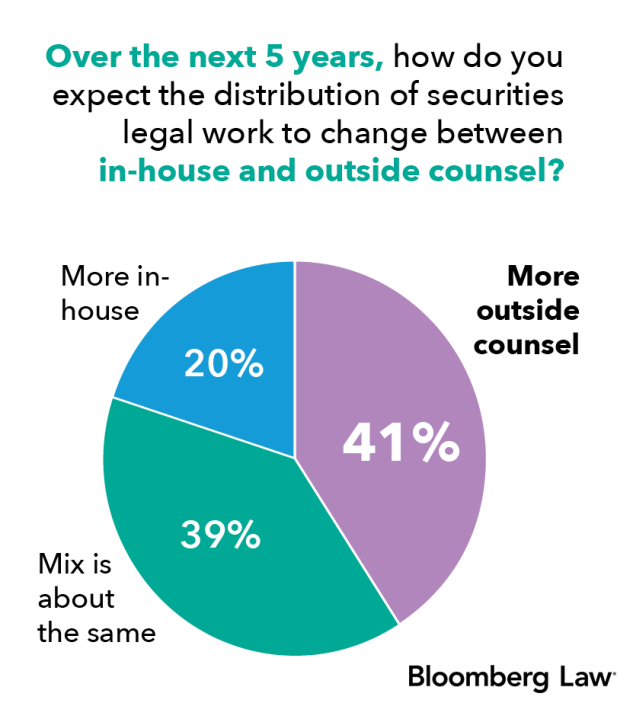 In terms of how securities attorneys view the distribution of workload and the respective roles of in-house and outside counsel, twice as many (41%) said they expect more work to go to outside counsel over the next five years compared to the 20% who foresee more work going to inside counsel.

The top challenges identified by the survey’s securities lawyers in regard to their practice are difficulty balancing the risks of nondisclosure versus disclosure (43%), difficulty keeping up with changes in the law (25%), and competing work in different practice areas (25%).

Survey respondents were 47 securities and capital markets attorneys who had a median securities law practice experience of 20.6 years, and for whom at least 20% of their work involved securities transactions or capital markets. Respondents self-identified as 28 law firm lawyers, 11 in-house lawyers for a public company, seven in-house for a private corporation, and one “other.” About 15% worked in an organization with 15 or fewer lawyers, more than 21% have 16-100 attorneys, and over 61% work with at least 100 other lawyers. The industries that support their practice cover a wide range of specialties, but finance, insurance, real estate, transportation, communications, energy, construction, retail, and services were the most common.