Blank check companies have a checkered past. Their reputation became sullied by scandal in the early 1990s, most often owing to fraud in penny stocks. In 1992, the Securities and Exchange Commission acted to curb abuse by mandating the creation of an escrow account to hold investor funds under a new Rule 419. Eschewed for years owing to their bad reputation, this reform helped set the stage for their redemption in the form of special purpose acquisition companies (SPACs).

SPACs began establishing a track record of success, leading to more and more reputable professionals and savvy investors becoming involved. SPACs have proven to be a helpful tool for managing market volatility and enabling companies to go public in a more timely way—long a criticism of the traditional IPO process. SPACs have taken full advantage of the more liberal M&A rules to promote their business combinations.

Unfortunately, SPACs’ propensity toward conflicts of interest and a lack of transparency, combined with their popularity, have increased the need for the SEC to once again step in with more regulation to protect investors.

After considerable anticipation, the SEC Wednesday proposed new rules and amendments seeking to force SPACs to curb behavior that disadvantages investors and to substantially increase SPACs’ potential liability if they try to lead investors down the primrose path. The rules target SPACs but also apply more generally, to shell and blank check companies.

The decision was not unanimous. Hester Peirce, the only commissioner to vote against the proposal, dissented in the Commission’s 3-1 vote, saying the majority’s proposal “seems designed to stop SPACs in their tracks.”

The SEC’s impetus for these proposed new rules has been an unprecedented surge in SPAC transactions over the past two years that has heightened the agency’s concerns about SPACs’ structure and use—particularly to make bullish pre–merger projections that would be precluded were the company going through the traditional IPO process. The proposed rules seek to address these issues.

Furthermore, SEC Chairman Gary Gensler has referred to the merger or de–SPAC stage in a SPAC’s lifecycle as the “second target IPO stage,” with the implication it should be regulated as such.

In order to address the deficiences in the way the market is using SPACs, the SEC’s proposal lays out four principal goals:

Some of the more notable aspects of the proposed rules are described in the graphic below. 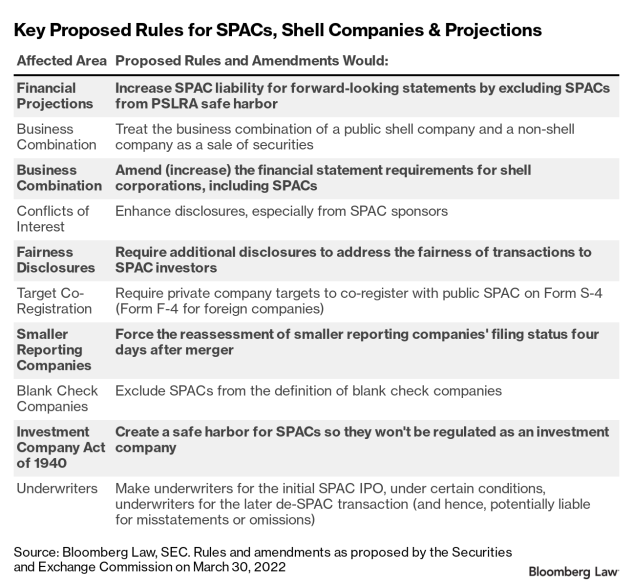 One of these aspects affects financial projections. The ability to make financial projections about a proposed business combination between a public SPAC and a private operating company has been one of the key features making SPACs attractive to sponsors and investors.

Proposing to change the Private Securities Litigation Reform Act of 1995 (PSLRA) to expose SPACs to liability for projections and requiring private targets to co-register the proposed merger with the SPAC sends a clear message that the SEC seeks to hold the parties’ feet to the fire to get more fulsome, fair, and reasonably grounded disclosures about these de-SPAC mergers to investors.

Overly optimistic financial projections made without a reasonable basis have plagued some de-SPAC transactions. The Commission would like to put a stop to that practice, one that has benefited SPAC sponsors at the expense of other investors.

Another aspect of SPAC mergers that the SEC is seeking to regulate more involves the financial statements. These have proven to be a troublesome area for some companies that have gone public via a reverse merger with a SPAC. The road to complete a traditional IPO can be a long one—but for very good reason.

It takes considerable time for a private company—particularly a start–up run by its founders with near total control over corporate governance—to put in place the internal controls and processes a public reporting company needs.

A private company that goes public by merging with a public SPAC is able to skip all that tediousness to go public fast. Although the majority of companies that went public via a SPAC merger have made their SEC filings on time, some companies clearly have not been ready for their significant obligations as a public company, leading some to file for extensions (not a good look) and others to restate their financial statements to correct serious accounting errors (an even worse look).

If the proposed rules are adopted, the increased disclosure required on Form S-4 (registration statement for business combination or exchange) by both the public SPAC and the private target operating company gives SEC staff the opportunity to attend to potential issues with financial statements and financial projections before they do real damage. The SEC is moving toward a similar level of review as required of traditional IPO companies.

The co-registration by the private operating company makes it potentially liable for misrepresentations or omissions made by the SPAC on the Form S-4 or in the supporting documents. The Commission wants the major parties (SPAC, target company, and underwriters) to know they are potentially on the hook to investors for material misstatements or omissions in their disclosures, so much more accurate, robust, and defensible statements will be expected if these rules are adopted.

At times, SPACs may be functionally similar to investment companies. The proposed rules offer SPACs a safe harbor from being regulated as an investment company so long as a SPAC meets certain criteria, including requirements that it:

These proposed rules may deter some SPACs from certain targets and increase their costs, but the majority of the commissioners believe it will nonetheless promote capital formation by broadly increasing investor confidence.

What seems nearly certain is that the Commission will adopt at least some new rules to regulate SPACs more closely. The SEC has been rattling sabers too long and too loud to do nothing. The Gensler-led Commission has shown itself to be undeterred by potential controversy, such as the recently proposed greenhouse gas emissions disclosure regime that some believe exceeds the SEC’s authority to mandate.

Among the proposed rules likely to be kept are the disclosure requirements, which would bring the merger disclosure much closer to traditional IPO registration statement levels of completeness. Enhanced disclosure on SPAC sponsor conflicts of interest is overdue, and the rules regarding dilution ought to be noncontroversial. The safe harbor shielding SPACs from being regulated as investment companies also will probably get through to the final version, though the 18-month deadline for entering into a merger agreement could be extended by a few months.

More problematic is the proposed expansion of liability to the target company for the SPAC’s faulty disclosures by making the private company co-register on Form S-4. This rule would redefine “registrant,” because only reporting companies, not private companies, are required to file. If adopted, this change would be a substantial step by the Commission toward regulating private companies—something the more progressive members of the Commission desire, particularly on ESG matters. Regulation of private companies would likely require that additional authority be conferred on the SEC by Congress.

Rule 140a might fairly be called the “in-for-a-penny, in-for-a pound” rule for underwriters. The idea is to spur underwriters to conduct vigorous due diligence to protect investors with robust disclosures. But investment banks may balk at assuming the risk for what could be tenuous connections to a financing creating substantial potential liability for them. This rule is relatively likely to be amended to limit the instances to which it applies.

Those forecasts are likely the very type of information many investors want in deciding whether to have their money in a merger deal, but they could disappear without that safe harbor. Projections have also sometimes been abused by SPACs making optimistic forecasts without a reasonable basis. That does real harm to investors—and so the Commission may be willing to test this amendment in the courts.

Through their opacity, their conflicts of interest, and their abuse of merger rules, SPACs have made the issue of new rules restricting their conduct inevitable. Some of the proposed SPAC rules appear to go too far and are likely to make SPACs less attractive, but the need for more regulation is difficult to deny.