By deal count, reverse mergers are really having a year this year. And, no, it isn’t only because of SPACs.

Both traditional and SPAC reverse mergers are rising in prevalence, according to the latest data. In addition, the Securities and Exchange Commission has recently indicated that it has eyes on both types of deals.

Both SPAC and Non-SPAC Reverse Mergers Are Up

A total of 398 reverse mergers—valued at more than $134.8 billion—have been announced this year and are currently pending or completed, marking a record high annual count.

This type of transaction, by which a private company goes public by merging with a publicly traded entity, can significantly shorten the time and effort it takes to become publicly listed. Of these reverse merger deals, 246 transactions—valued at upwards of $113.2 billion—have involved special purpose acquisition company (SPAC) acquirers and are also known as de-SPAC transactions.

More than 60% of this year’s reverse mergers have been SPAC deals. Even so, it’s notable that the number of non-SPAC traditional reverse mergers, 152, marks a record high as well. 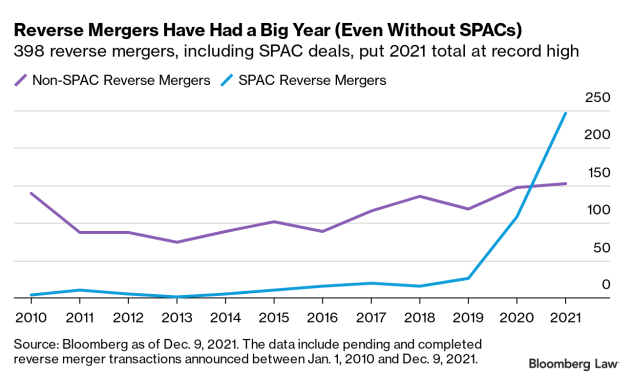 This year, SPACs have increasingly become the target of SEC scrutiny. A prime example is that, according to a Lucid Group Inc. 8-K filing made with the SEC Monday, the company received a subpoena Dec. 3 from the Commission “requesting the production of certain documents related to an investigation by the SEC.” The filing further states that “the investigation appears to concern the business combination between the Company (f/k/a Churchill Capital Corp. IV) and Atieva, Inc."—the deal that, per a recent Bloomberg News report, resulted in Lucid going public earlier this year. This means the SEC has potentially taken aim at the largest SPAC merger of the year.

What in the world is a “SPAC,” anyway? And why should anybody care? pic.twitter.com/RGx1XACU6W

In the video, Gensler cautioned that he has “asked staff for recommendations about how we might update our rules so that investors are better informed about the fees, the costs, the conflicts that may exist with these SPACs” and that the SEC will “work to hold bad actors accountable and keep a close eye on all the parties in these transactions.”

As for traditional (non-SPAC) reverse mergers, they have a long history and have seen waves of popularity and controversy in decades past. Coinciding with their current popularity, the SEC issued a letter brief on Oct. 29 to the Delaware Court of Chancery in the Forum Mobile, Inc. matter (Docket No. 2020-0346 (Del. Ch. May 08, 2020)), voicing concerns regarding reverse mergers and stating, inter alia, that in certain scenarios “when reverse mergers involve non-reporting issuers that are not required to file periodic reports or other information with the Commission” they “may pose a significant risk to investors.”

The Oct. 29 letter brief also offers the reminder that the SEC “has pursued numerous enforcement actions against defendants who have engaged in fraud in connection with reverse mergers involving non-reporting issuers, including in response to pump-and-dump schemes and other attempts to manipulate the markets.”