After a not-so-wonderful second quarter, the employment picture for the legal field improved in Q3 with—as usual—some groups faring better than others.

Bureau of Labor Statistics data show that overall legal employment climbed from 1.80 million in Q2 to 1.83 million in Q3, and the average unemployment rate fell from 1.43% to 0.93%, indicating that many of the unemployed in the legal field found legal work in Q3 (or dropped out of the workforce).

From Q2 to Q3, lawyer unemployment fell from 1% to 0.1%—the lowest rate in more than a decade. A likely explanation is that most who sought lawyer employment have obtained it, and that few are still looking. 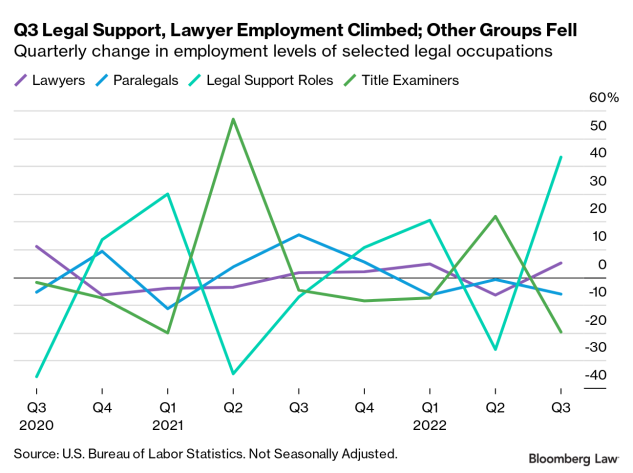 The fall in employment among paralegals and the major jump in unemployment indicate that while paralegal jobs shrank in Q3, the demand for them increased. Title examiners may have had a tough quarter due to increasing interest rates slowing the pace of real estate transactions—thus lowering the need for title examiners.

Explanations for these findings might be that many unemployed men looking for legal jobs between Q2 to Q3 found them, while many women ended up leaving the legal field over the quarter.