Since the beginning of the war in Ukraine, we’ve seen parties delaying and pulling deals. Top deal lawyers are also predicting there may be somewhat of a slowdown in M&A activity this year from last year’s historic level due to the compounding of various headwinds.

Despite these developments, M&A overall returned pretty solid results in the first quarter of 2022. One exception—and a trend to keep an eye on—is cross–border deals, which saw the steepest Q4–to–Q1 drop in volume in at least 15 years.

A Farther Distance to Fall

A total of 9,558 M&A transactions, with an aggregate value of $712.4 billion, were announced in the first quarter. These deals involved the acquisition of a controlling stake in the entity or assets to be acquired (“controlling-stake deals”), and are currently pending or have reached completion.

This volume represents a near–$300 billion drop from the fourth quarter’s $1 trillion, and falls well short of the record–breaking first–quarter volume of $854.7 billion seen last year. Despite this drop, the deal volume for first–quarter 2022 actually stacks up solidly against first quarters in recent history. First–quarter deal volumes in both 2018 and 2019 also fell within the $700 billion–to–$800 billion range. 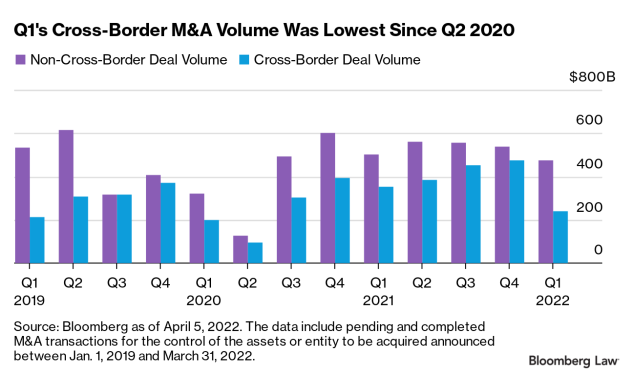 There’s a strong tendency for first-quarter M&A volume to be lower than the quarter directly preceding it; fourth quarters tend to be very busy in the M&A market. To illustrate that point, only four times in the past 15 years has a first quarter’s M&A volume surpassed the preceding quarter’s volume. It’s one of the reasons that to understand first quarter performance, we typically compare it to past first quarters and not to the prior quarter.

However, given last year’s historic level of M&A activity, particularly in the fourth quarter, it may be helpful to look at the percentage changes from fourth-quarter volume to first-quarter volume to get a sense how “normal” last quarter’s Q4–to–Q1 drop was. Last year’s fourth quarter saw the highest quarterly deal count on record for controlling–stake deals, and was only the fourth individual quarter on record to break the $1 trillion mark for such deals.

The lower overall deal volume in the first quarter can be attributed in part to fewer mega deals. 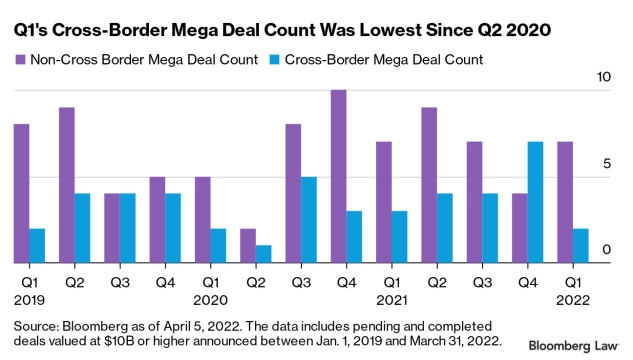 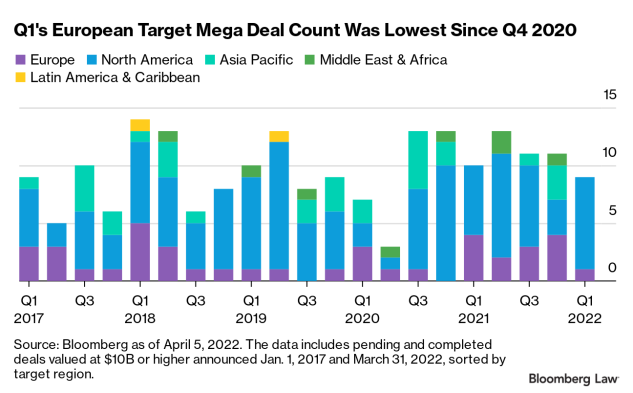 The sole mega deal involving a European party in Q1 was Blackstone Inc.‘s Feb. 15th announcement of its acquisition of Dutch logistics real estate company Mileway BV. The announcement of the Mileway acquisition took place about a week before Russia’s invasion of Ukraine.

Noticeably absent from mega deal activity, however, was the rest of the globe. With North American targets accounting for all mega deals following the start of the conflict in Ukraine, this stagnation could signal that global deal parties are grappling with the initial shocks of war.