Foreign issuers occupy four of the top five spots on our list of the largest companies by market capitalization targeted by activist investors in the first quarter of 2021, based on data from the Bloomberg Terminal. The most successful campaign during this period involved the largest company on the list, Danone SA, as investors forced Emmanuel Faber, chairman and CEO of the underperforming French food company, to resign. 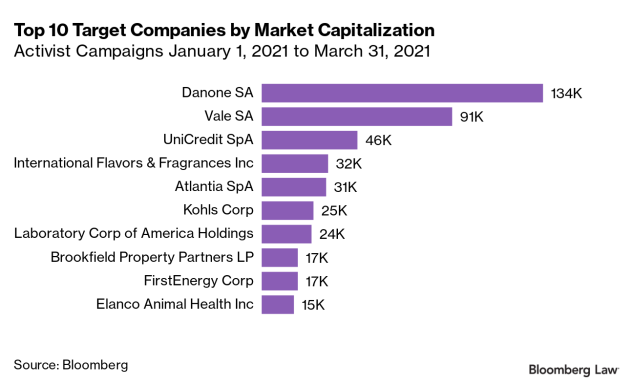 Danone struggled to recover from the initial pandemic downturn, as demand slowed for both its yogurt brands, Dannon and Activia, and for Evian bottled water. Three investment funds, Bluebell Capital Partners, Artisan Partners Asset Management Inc. and Causeway Capital Management, campaigned for change at the top. As Artisan stated in a letter to Danone’s board, the company in February 2021 “reported year-end results that exhibited a continuation of poor performance,” marked with the “hallmarks of management failure.”

Faber initially resigned as CEO, but remained as board chairman. The Danone board stated that it supported Faber remaining in his position, but the investors called for his removal from his board role. Bluebell co-founder Francesco Trapani and portfolio manager Nicolas Ceron stated that the presence of Faber in a leadership position would have a “highly detrimental effect” on the company. Faber subsequently resigned from his board role in March.

Among the first quarter’s other top foreign targets, Brazilian mining company Vale S.A. faces a campaign from a consortium of investors seeking a range of corporate governance changes. In 2019, a dam owned by the company collapsed, killing 270 people, causing extensive property damage, and resulting in significant production cutbacks. The company reached an agreement with Brazilian authorities to pay more than $7 billion, including payments to victims and environmental investments.