A pedestrian demonstrates the use of a local transport information app operated by Moovit in this arranged photo in Barcelona, Spain, on Wednesday, Feb. 25, 2015.
Pau Barrena/Bloomberg

While private equity has been looking outside the U.S. to do its mega deals since the pandemic began, the industry’s deal activity in the U.S. small and middle market is propping up the deal volume of the entire market segment.

An Even Bigger Slice

In the second quarter, we saw historically low M&A deal volume across the board. The same held true for the small and middle market, which had the lowest volume for any quarter in at least five years. Roughly $75 billion dollars in deals involving U.S. targets valued up to $1 billion dollars were announced in the second quarter, compared to $115 billion in the first quarter and $156 billion in the fourth quarter of last year. 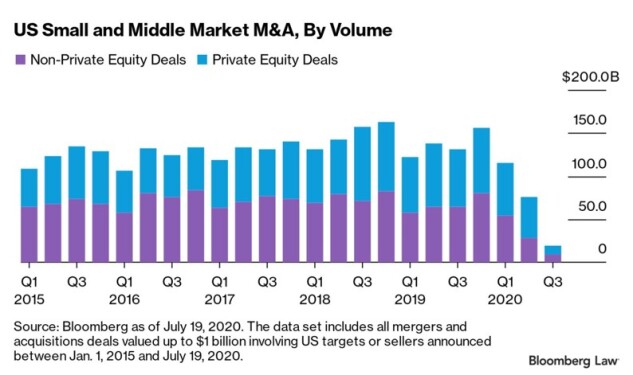 If we look at the private equity subset of these small and middle market deals, we see a slightly different story. For PE deals, the second quarter was definitely slow, with lower volume than in prior quarters, but the negative impact on deal volume was not as drastic compared to the rest of the market.

What’s striking is the increase in private equity’s share in this segment: Over recent years, private equity deals have represented about half of all deals. In the second quarter, this percentage market share rose to 62%.

So, while the entire small and middle market pie did shrink last quarter, private equity came away with one of the largest slices of the market it’s had in recent years.

Possibly even more interesting is that while the small and middle market—which accounts for the greatest number of deals—is suffering, private equity technology deals in this segment are continuing at a pre-pandemic pace. $14.9 billion in PE tech deals were announced in the second quarter, and this volume is nearly exactly on par with the first quarter of this year and the fourth quarter of 2019. 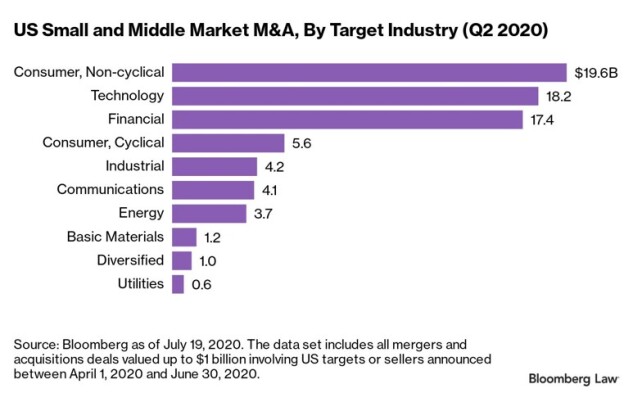