Pregnancy discrimination filings in federal court continued to rise in 2020, and the ongoing impacts of Covid-19 and the economic downturn are likely to exacerbate that trend in the coming years.

The number of federal pregnancy discrimination lawsuits has been rising steadily over the last five years, with claims in 2020 up around 67% from 2016. And despite many factors that should have driven filings down in 2020, an analysis of Bloomberg Law Dockets found 16% more federal pregnancy discrimination claims filed in 2020 than in 2019. In fact, this was the largest jump in federal filings in the past three years. 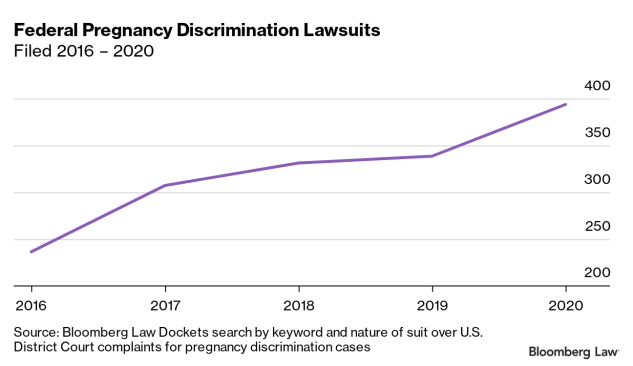 The increase in litigation is made more dramatic by procedural changes at the Equal Employment Opportunity Commission (EEOC) related to Covid-19 that made it harder for plaintiffs to file lawsuits between March and August of 2020, as well the fact that annual U.S. births have been steadily falling from 2016 to 2020. Fewer pregnancies presumably could mean fewer pregnant workers and, therefore, fewer federal lawsuits. But instead, pregnancy discrimination filings have increased as the number of pregnancies declined.

Pregnancy During a Recession

Given the procedural obstacles that Covid-19 has thrown at would-be plaintiffs, why did 2020 end up with so many lawsuits?

The reality is that pregnant workers have always been vulnerable to workplace discrimination, but they are especially vulnerable during an economic downturn. The expense of parental leave and the prospect of increased health care costs can make pregnant workers attractive targets for furloughs, layoffs, or forced leave. And a lack of hiring opportunities in recessions can make suddenly unemployed pregnant workers more willing to fight to recover lost wages and lost opportunities.

That vulnerability was compounded in 2020 as some employers, out of a concern for worker safety from Covid-19, refused to allow pregnant employees to work. In June, the EEOC updated guidance to note that “[e]ven if motivated by benevolent concern,” such a practice was barred under federal law.

Workers face an equally challenging road after giving birth. From a gender-in-the-workplace perspective, working mothers were paid significantly less than childless employees before the pandemic and, considering the current lack of available and affordable child care, that trend is not likely to change anytime soon.

While it’s clear that the economic downturn has played a role in the 2020 bump in filings, it cannot explain the overall trend of rising federal pregnancy discrimination lawsuits since at least 2016. And those federal lawsuits paint only part of the pregnancy discrimination picture, though, since complaints can be resolved by the EEOC or a state agency, and workers can file their suit in state court.

Employers should take note of these federal filings, however, because the long-term trend indicates something more elemental at work: that workers may be becoming less willing to accept unlawful pregnancy discrimination and more empowered to fight it.

This trend is likely to accelerate as long as the pandemic and recession persist, as more employees are driven out of the labor force through furloughs, layoffs, forced leave, lack of accommodation, unequal treatment surrounding issues of childcare, constructive discharge, and a lack of hiring opportunities.

Therefore, employers should be prepared to see more lawsuits surrounding pregnancy discrimination in the coming years, especially if a federal pregnancy accommodations bill does indeed get passed.

Beyond the threat of litigation, pregnancy bias increases gender pay disparities, makes workplaces less welcoming to employees who connect that bias to other gender-based biases, and can cost employers valuable high-performing workers. To combat these negative effects, employers should actively seek to eliminate pregnancy bias by reviewing their discrimination, accommodation, and leave policies and implementing procedural safeguards to protect pregnant workers.