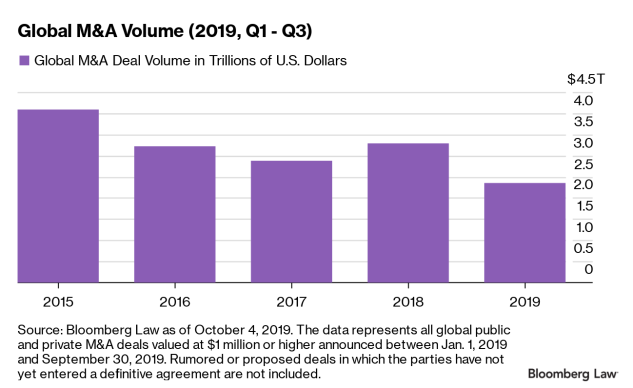 Despite the fact that the first and second quarters were relatively strong for global M&A volume, the third quarter’s lower numbers, in addition to fourth quarter performance in recent years, suggest that there is a low likelihood that year-end results will match last year. A gap of nearly a trillion dollars in M&A deals, added to 2019 volume of $2.4 trillion through the third quarter, would be needed to reach 2018’s global volume of $3.2 trillion.

The third quarter’s announced mega deals have brought the 2019 mega deal count up to 29 announced deals and raised mega deal volume up to $870 billion, representing 37% of the total global M&A volume. This year’s mega deal volume through the third quarter already surpasses 2018 and 2017 full-year mega deal volumes. Rumored or proposed deals, such as the recently withdrawn $36.2 billion unsolicited takeover bid for London Stock Exchange Group Plc by Hong Kong Exchanges & Clearing Ltd., are not included in these totals. 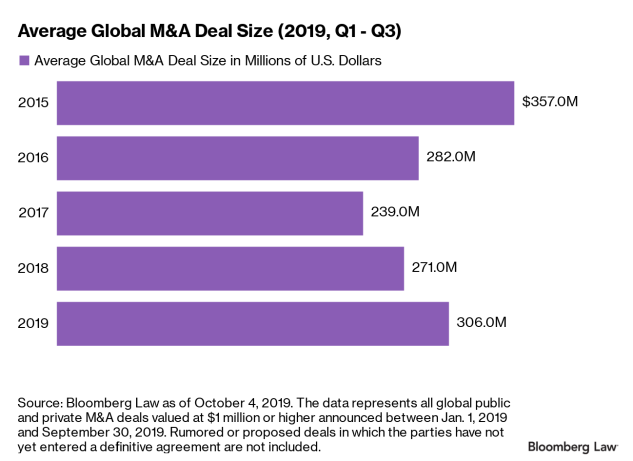 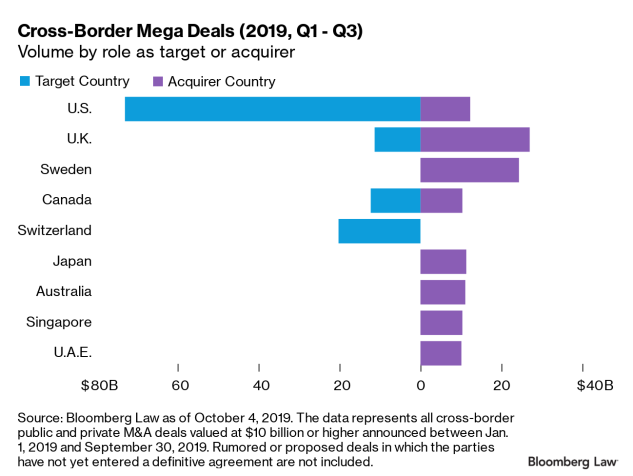 Only three countries—the U.S., the U.K. and Canada—have been both target country and acquirer country in cross-border mega deals announced through the third quarter of 2019.

Deals involving acquirers in the consumer, non-cyclical sector, totaling $494 billion, accounted for 21% of all global deals through the third quarter.

Pharmaceutical industry acquirers announced the highest global deal volume of any other industry group with $278 billion in deals, which represents 12% of all global M&A. Global pharma acquisitions volume, through the third quarter of 2019, has already far surpassed 2018’s total volume of $171 billion.

Among the largest acquisitions by the pharma industry in 2019 so far have been the $88.8 billion Celgene Corp-Bristol-Myers Squibb Co deal, the $83.8 billion Allergan PLC-AbbVie Inc. deal, the $32.7 billion Pfizer Inc.-Mylan NV deal, and the $11 billion Array Biopharma Inc.-Pfizer Inc. deal. According to Bloomberg, the Mylan deal, a Reverse Morris Trust transaction in which the Upjohn unit will spin off then merge with Mylan, is set to “reshape the brand-name and off-patent pharmaceutical industries.” Major transformations and high activity in the pharma sector is a theme for the year. 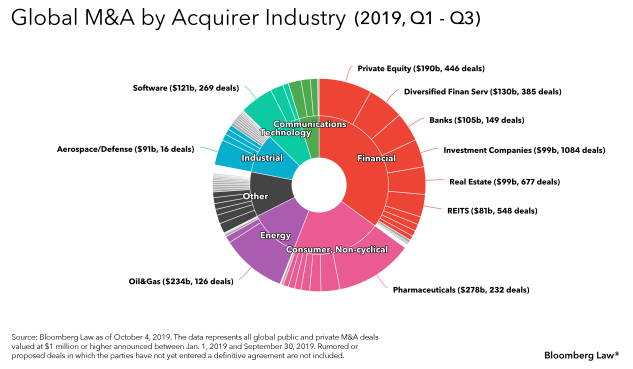 While the financial sector is the most acquisitive, it comes in second place as a target sector. For global targets, financial and consumer, non-cyclical are the most popular target sectors with 21% and 25% of all deals involving targets in those sectors, respectively.

Targets in the real estate industry group are the most popular targets in global M&A so far in 2019 with $193 billion in pending and completed deals. 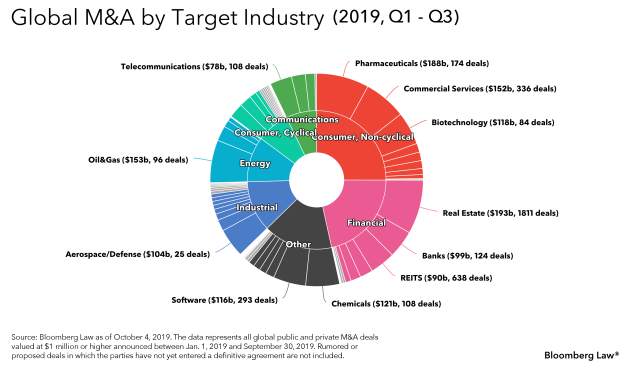