The stay-at-home orders issued by states to fight against the Covid-19 pandemic abruptly shuttered businesses and shook the stock market, driving an economic downturn that may rival the Great Depression. Companies, public and private, are scrambling for any port in this storm. They are trying to restructure their debt and are increasingly seeking nontraditional finance options such as lifelines from the federal government, heavy utilization of bank lines of credit, and private investors.

The currently depressed and volatile public markets limit the traditional financing options normally available to public companies. But, all things being equal, private companies suffer even more than public companies during recessionary times, owing to their greater risk to investors (e.g., no publicly audited financial statements or mandated SEC disclosures). Investors demand higher rates or larger discounts from private companies to account for that increased risk. 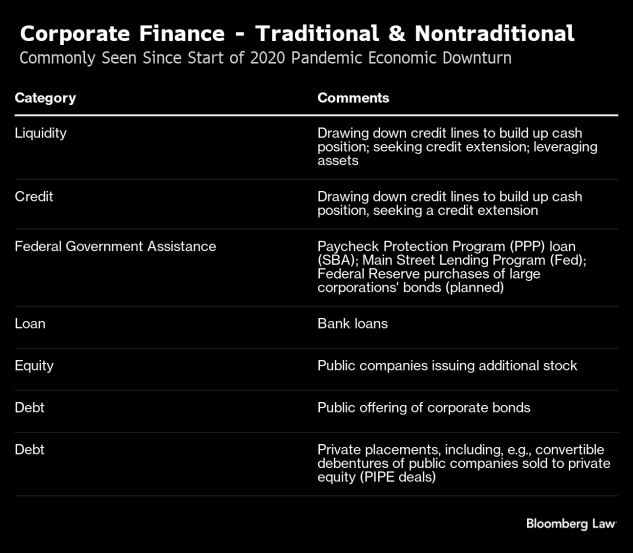 Raising Money in a Pandemic-Induced Downturn

Publicly traded companies can still issue more stock to raise capital, albeit at share prices perhaps substantially lower than pre-crisis levels. For private companies looking to go public, the extra volatility may make pricing an offering too difficult to manage, while the diminished expectations for the company’s near-term performance suppress the business’s perceived value to IPO investors. The downturn has effectively shut the “going public” door for most companies, for the time being. Even so, firms are seeking debt finance from various sources, including the following:

Banks toughen terms for new loans. Besides quickly reducing a company’s expenses (e.g., slow paying creditors, laying off employees) to preserve cash, tapping a company’s existing line of credit with a bank often represents the first option for companies looking to weather economic tumult. For existing loans, including lines of credit, banks have shown some flexibility with adjusting terms for borrowers to help them avoid a default. Banks have been toughening terms for new loans, however, raising borrowing rates and including lender-friendly terms more typical of junk-rated transactions or bridge loans.

SBA loans to small caps evaporate. A new finance option for some public companies disappeared almost as quickly as it arrived. After it became known that many small-cap public companies, most notably national restaurant chains, had obtained millions in forgivable loans from the U.S. government while genuine mom & pop-type small businesses were shut out, a backlash ensued. Restaurant groups such as Shake Shack ($10 million) and Ruth’s Chris Steak House ($20 million) have promised to return the money, but certain other companies are vowing to keep it. The Treasury Department has asked publicly traded companies that received these amounts to repay them to the government so that they can be freed up for smaller businesses.

The SBA is currently conducting a second round of PPP loans, funded with an additional $310 billion from Congress. As of May 14, the SBA reported that it had already approved nearly $194 billion in additional loans to small businesses.

Fed closes loan facility to highly leveraged companies. The Federal Reserve is operating a $600 billion lending initiative known as its Main Street Lending Program. Unlike the SBA’s forgivable loan program, the government expects the mid-size businesses receiving these low-interest loans will repay them someday. The terms for these Fed loans preclude highly leveraged businesses from partaking.

At present, the Federal Reserve is running nine emergency lending programs in partnership with the Treasury Department. Fed Chair Powell spoke publicly May 13 about the need for more financial support for the economy. He emphasized that additional fiscal support, while costly, could help “avoid long-term economic damage.”

Corporate bonds are under pressure. One of the traditional ways public corporations raise capital is by issuing corporate debt. However, like equity offerings, corporate debt is also under pressure these days. In this tumultuous environment, it is difficult for corporations to issue debt to keep a business going and also hard for private equity to obtain debt financing to conduct their leveraged buyouts. In an unprecedented move to shore up corporate bond markets, the Federal Reserve made a pledge on March 23 to buy risky corporate debt. It did this as part of its emergency pandemic financing to steady the economy.

PIPE Deals Are Filling the Gap

Offering a potential solution to both public companies’ trouble raising capital and private equity’s trouble securing debt financing, PIPE deals are quickly filling this financing gap. PIPEs refer to private investments in public equity. PIPE deals cost more to the company seeking to raise capital because the shares are sold at a discount to their current trading price and hurt their existing shareholders by diluting their shares. The downsides to these deals mean companies are reluctant to enter into them unless they are really in a tough spot.

Private equity firms, whose business model is often predicated on buyouts where they take control of the target company, typically must get approval from their limited partners to conduct a PIPE transaction. On April 6, the SEC approved a temporary waiver of shareholder approval rules to help facilitate PIPE transactions involving public companies listed on the New York Stock Exchange, bringing the exchange’s rules in line with the Nasdaq.

These deals spiked during the 2008 financial crisis and have already reached a fever pitch during this pandemic downturn. Bloomberg reports that PIPE deals have “gotten so popular that the bidding for slices of distressed companies can resemble a heated takeover battle, with as many as 20 private equity firms clamoring for a piece of one deal.”

PIPE deals may include equity, debt, or debt that is convertible to equity at a specified price. Similar arrangements have been made with private companies such as Airbnb. The home-sharing company recently raised $1 billion by issuing first-lien debt to 20 accredited investors, including private equity firms. Expect to see PIPE deals increase significantly if the downturn is deep and prolonged.