While viewing the Senate Budget Committee’s recent hearing on labor relations issues, I heard two facts that made me sit up and take notice.

“After a union wins an election, the average number of days to get to a contract is 409 days,” Sen. Tim Kaine (D-Va.) said. “And about a third of victorious unions can’t get a contract in the first three years.”

The reason the first statistic struck me is because it’s from me. Or, I should say, it’s from Bloomberg Law’s labor data, which led to an article I posted last summer.

Kaine’s mention spurred me to return to our databases and update that figure. The result: Based on our analysis of 391 records of first contracts signed since 2005, the mean number of days it takes newly unionized employers and their newly organized workers to ratify a first contract has grown to 465 days. (The median showed a more moderate increase, from 356 to 374 days.)

Means are subject to outliers from time to time, which helps explain such a dramatic jump. But still, it’s hard to ignore that there’s been a trend toward longer delays in first-contract signings. Here’s a look at the averages over time. 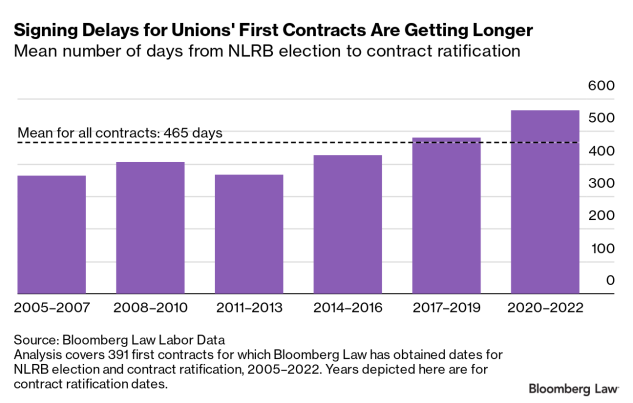 The second statistic Kaine cited didn’t come from Bloomberg Law. In fact, I’m not sure where it originated. I’ve traced it back to a mention in a 2009 Economic Policy Institute paper, but it might be even older.

I don’t dispute the figure itself; whatever the methodology was, it was almost certainly different from how we crunch our data. But I thought I’d go ahead and provide a 2022 version anyway. 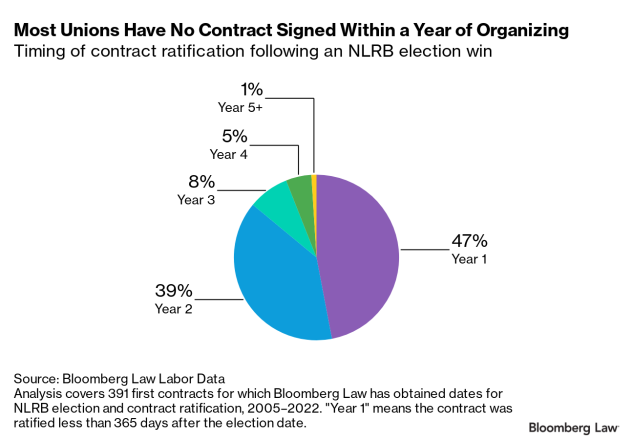 The result from our databases: 53% of the 391 first contracts took a full year or more to sign—virtually matching the 52% figure mentioned in the 2009 paper, incidentally. But only 6% of contracts took three full years or more, not one-third as Kaine and others have said.

Last summer, I posted another finding that longer delays in first contracts correlated to lower wage hikes for workers. I’ll be updating that statistic soon.

To contact the reporter on this story: Robert Combs in Washington at rcombs@bloomberglaw.com