It’s no longer a secret: c-suite sexual harassment can bring down a business. In fact, M&A lawyers have already devised contractual safeguards against this risk and, in relatively short order, the so-called “#MeToo” deal provisions show broad consensus.

A #MeToo sexual harassment representation and warranty (“rep” in deal jargon) started to appear in publicly filed M&A contracts last year, and we are now seeing it in every market segment including mega deals.

My prediction is that, like the #MeToo movement itself, the rep is here to stay and is on its way to becoming a market standard.

Also referred to as a “Weinstein clause,” the #MeToo rep is a statement by a deal party about its involvement in allegations of sexual harassment. In M&A deals, the #MeToo rep is most commonly a representation and warranty by the target company to the buyer in the section entitled “labor and employment matters” (or in a similar section) that since a specific date no allegations of sexual harassment or misconduct have been made against the company’s officers or executives. Sometimes the statement also includes specific disclosures of sexual harassment and misconduct settlements.

Based on Bloomberg Law’s transactional precedent database, which contains all publicly filed M&A contracts, this new representation and warranty started appearing in 2018. This timing coincides with the #MeToo movement picking up momentum and shaking the country from corporate board rooms to Supreme Court confirmation hearings. Within the year following reports of serial sexual predation by Harvey Weinstein in October 2017, at least 425 prominent individuals across industries were publicly accused of sexual misconduct. It comes as no surprise that the U.S. M&A market rapidly began to react to the new risk presented by pending or potential sexual harassment allegations against senior corporate executives. 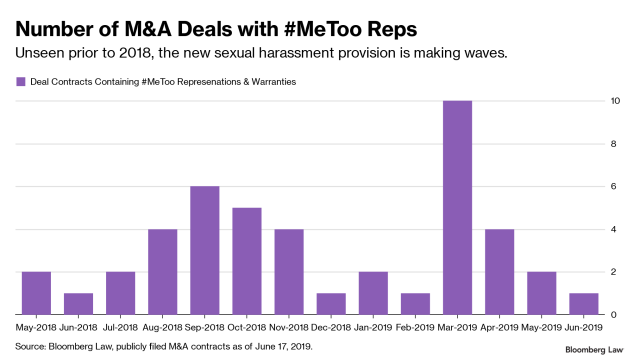 The 45 M&A contracts including #MeToo provisions filed publicly as of June 17, 2019 contain some variations to the terms of the rep, such as knowledge and material adverse effect qualifiers, the length of the time period covered by the representation and disclosures, all of which are discussed in detail below.

The principal focus of the rep, the statement as to sexual harassment allegations, found greater consensus. Each of the contracts included some variation of this basic phrase:

Since x date there have been no sexual harassment allegations against the company’s executives.

It’s Even Popping up in Mega Deals

A sign of its market adoption is that #MeToo provisions appear in deals of all sizes, from deals valued at $13 Million to $40.97 Billion. It’s not surprising that the highest prevalence of the #MeToo rep appears in the middle market, which also tends to be the segment with the highest overall deal count. In the first quarter of 2019, for U.S. targets, a total of 175 middle market deals were announced, while 32 large deals and 7 mega deals were announced in the same quarter. 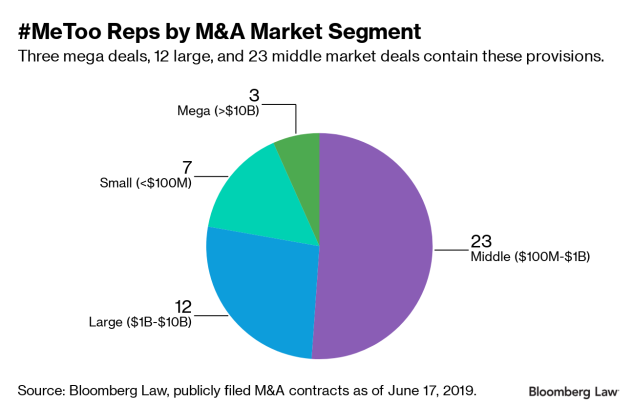 Three recent mega deals, defined as deals valued at $10 Billion or higher, included the provision. The pending Tableau-Salesforce mega deal valued at $15.3 Billion has a #MeToo rep in its Agreement and Plan of Merger dated June 9, 2019. In the representation and warranties subsection entitled “Labor Matters,” the target represents to the buyer as follows:

The WellCare-Centene mega deal valued at $13.53 Billion included identical, reciprocal #MeToo reps made between target and buyer in sections entitled “Labor Matters” in their Agreement and Plan of Merger dated March 26, 2019. They read as follows:

The pending WorldPay-Fidelity mega deal valued at $40.97 Billion also contains identical, reciprocal #MeToo reps from target to buyer and buyer to target in sections entitled “Employees and Employee Benefit Plan” in its Agreement and Plan of Merger dated March 17, 2019. In that deal, the rep reads as follows:

Stats on the #MeToo Rep Variations

Among the 45 #MeToo deals, certain key components of the reps show a range of variation: 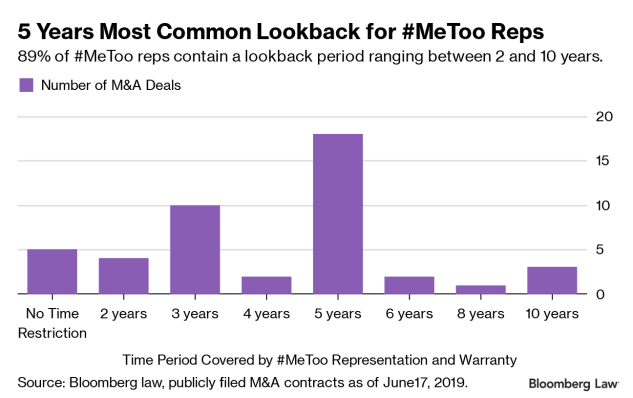 An overwhelming 84% of the 45 publicly filed #MeToo reps included knowledge qualifiers. These limitations favor the party making the representation (usually the target) because they provide an opportunity to claim lack of knowledge as a defense to a claim that they breached the representation and warranty.

This made me take a closer look at the seven deals that did not contain knowledge qualifiers (see table below). As I would have guessed, almost all the acquirer legal advisors on these deals are top-ranked large firms.

In a market in which the pro-target knowledge qualifier in a #MeToo clause is so common, it would take a strong buyer to keep it out. In four of the seven no-knowledge-qualifier #MeToo reps, the target apparently made a specific disclosure of a past or currently pending sexual harassment allegation. Such disclosures were also made in other #MeToo reps that did include knowledge qualifiers. References to these disclosures are typically worded as follows: “Except as set forth on Company Disclosure Schedule X, to the Knowledge of the Company…” 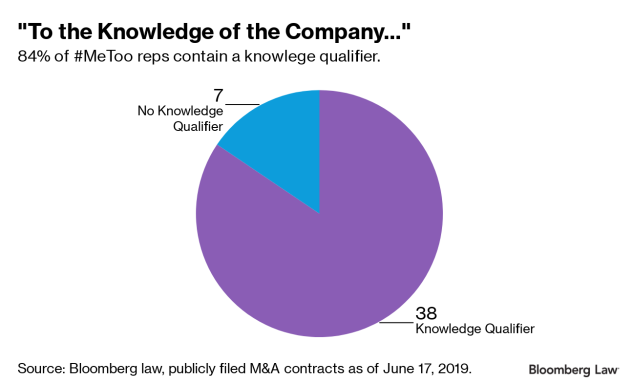 Only three of the 45 publicly filed M&A deals contain material adverse effect qualifiers. They include the WellCare-Centene mega deal referenced and excerpted above, the GlaxoSmithKline-TESARO Inc. deal referenced in the No-Knowledge-Qualifier table above, and the Spark Networks-Zoosk deal. (See the landmark Delaware Chancery Court Akorn Decision and Bloomberg Law practical guidance on material adverse effect clauses.)

Smart buyers are increasingly likely to push for the inclusion of these target reps because they incentivize disclosure and permit risk management. I predict we will see these #MeToo rep percentages go up in all market segments.