Sign outside of the US Bankruptcy Court.
STAN HONDA/AFP via Getty Images

In Bloomberg Law’s Chapter 11 Petitions and Litigation Midyear 2022 Report, we examined Chapter 11 bankruptcy filings in the first half of 2022. We paid especially close attention to megacases—nonindividual cases with more than $50 million in assets—and identified the leading jurisdictions where such cases are being filed.

With a sizable lead over other bankruptcy courts, the District of Delaware is 2022’s top jurisdiction for Chapter 11 megacases—and will likely remain so for the rest of the year. 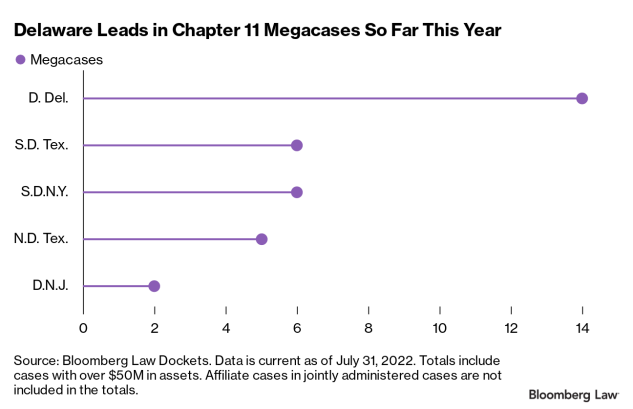 In July, the Southern District of New York, often seen as one of the big three megacase jurisdictions (along with Delaware and S.D. Tex.), bumped the Northern District of Texas from the midyear No. 3 spot by adding three major filings to its total, including Voyager Digital, Celsius Network, and SAS, the Scandanavian airline. Additional foreign airline or crypto-related bankruptcies may help the Southern District of New York maintain its place among the top three megacase venues, as it appears to be a preferred district for those types of cases.

(Updated the fourth paragraph to reflect ongoing efforts to amend Procedures for Complex Chapter 11 Cases in the Bankruptcy Court for the Northern District of Texas.)