Looking back at the stunning amount of M&A activity in 2021, two impressions—among many to be had—stand out: First, a record number of deals made it to the finish line and closed in 2021, including over a dozen mega deals that were signed in 2020 and 2019. And second, over a trillion and a half dollars in deals announced last year remain pending and still need to close. What a year, indeed.

You’ve already read that, by almost every metric, 2021 was a record-breaking year for M&A. For lawyers, a key number is $4 trillion—that’s the total volume for the 40,529 global M&A transactions announced last year for which definitive agreements were executed and that now are pending, completed, or have been terminated. This $4 trillion figure—representing so. much. ink.—towers over 2020’s $2.8 trillion, and even 2019’s $3.2 trillion, for the same category of deals.

$2.1 trillion of last year’s volume—a little over half of the total—comprises deals that were both announced and completed in 2021. $243 billion in deals were terminated in 2021 after deal agreements were signed in the same year. And $1.7 trillion in deals announced in 2021 remain pending, awaiting closing. 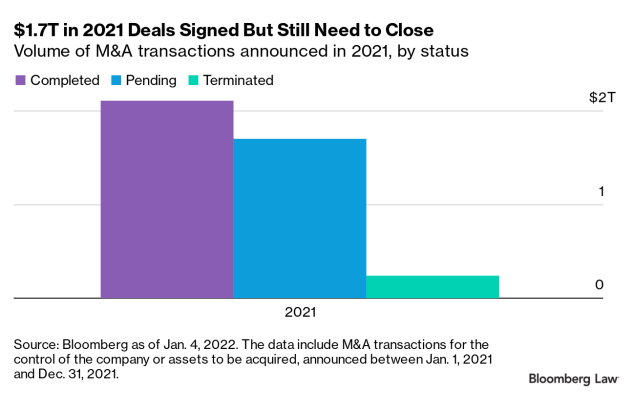 By deal count, roughly 71% of signed deals announced in 2021 also closed last year and 27% remain pending between signing and closing. Only 217 deals were signed and subsequently terminated in 2021.

Shifting to another way to look at the deal data: The number of deals that reached completion in 2021, regardless of when they were announced, also marks a record high. Here the key number is 30K. According to Bloomberg data, 30,640 deals, with an aggregate value of $3 trillion, closed in 2021. This total count of deal completions beats out any of the prior 20 years on record—by quite a bit. 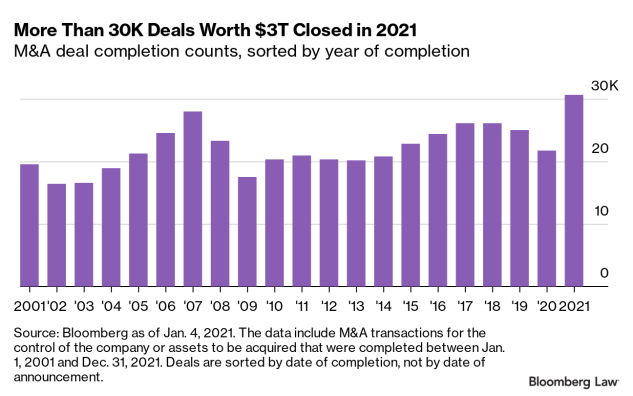 Looking back as far as 2001 at annual totals of deals closed in a single year, last year is the only year to break the 30K mark. The next-highest annual total was seen in 2007, during which roughly 28K deals reached completion. For reference, in 2020, roughly 21K deals closed, and in 2019, roughly 25K deals closed.

While the vast majority (more than 29K) of the deals that reached completion last year were also announced in that same year (worth $2.1 trillion, as noted above), it bears noting that of last year’s closings, 1,643 were of deals—with an aggregate value of $836.1 billion—that were signed in 2020. And a noticeable amount of deals announced in 2019 closed in 2021 as well—93 deals, with an aggregate value of $102.4 billion.

Among the 2020 deals that closed in 2021 were thirteen mega deals, each valued at over $10 billion, including the $46.4 billion Altice Europe NV–Next Alt Sarl deal; the $39 billion Alexion Pharmaceuticals Inc.–AstraZeneca PLC deal; the $25.7 billion Slack Technologies Inc.–salesforce.com Inc. deal; and the $21 billion Speedway LLC–Seven & i Holdings Co., Ltd. deal.

Considering the $1.7 trillion in deals announced in 2021 that remain pending—which include 22 mega deals valued at above $10 billion each—will the climate be as good for closings in 2022? Could pandemic developments this year delay or completely derail some of these deals? It’s unclear how many of these pending deals will make it to the finish line and how many will fail to close.

Furthermore, for all the deals that closed this year, especially the very large industry-changing deals, could they ultimately be reviewed and even unwound by regulators post-closing? Or, more likely, will we hear them cited as examples in arguments against further mergers, or in favor of antitrust reform?

Certainly, the record number of signings and closings of 2021 occurred while huge potential changes began brewing in the regulatory landscape that impacts M&A, not to mention during an unpredictable pandemic. Yet 2021 was full of remarkable achievements, and as a general matter, deal makers are predicting a bright new year—even as these open questions and potential risks remain.

With assistance from Eleanor Tyler.