According to the Bureau of Labor Statistics, unemployment rates for individuals working in legal occupations are significantly lower than United States unemployment rates as a whole. This has been true even during recent economic downturns associated with the dot-com bust and the Great Recession. 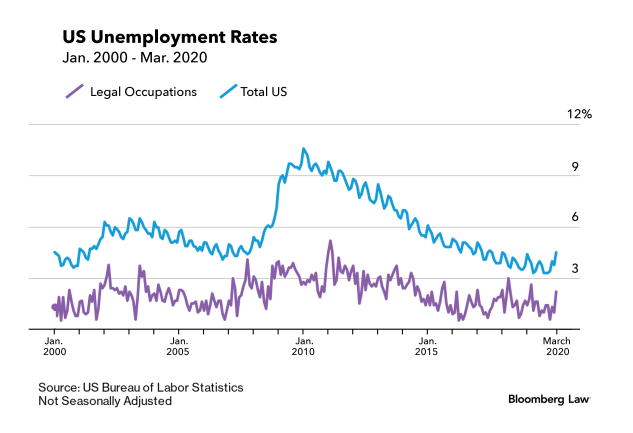 Why did the employment situation seem so dire for those trying to maintain a career in legal occupations around the time of the Great Recession? It might be because legal occupations experienced numerous unemployment spikes over the course of four to six years, depending on where you choose to draw the line, instead of a dramatic increase in the unemployment rate followed by a gradual decline, which is what the United States labor market as a whole experienced. 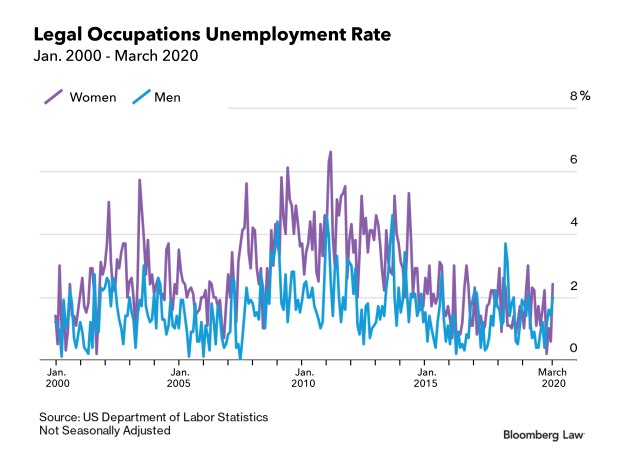 Therefore, the stress, anxiety, and uncertainty associated with working in a legal occupation around the time of the Great Recession were both severe and protracted, leaving employed legal professionals constantly concerned about losing their jobs in the next round of layoffs or firm shutdowns.

Women have been disproportionately affected by job cuts during periods of increased unemployment in legal occupations. At its peak between January 2000 and March 2020, women in legal occupations experienced an unemployment rate of 6.6%, compared to the peak for men of 4.6%. Notably, both of these are below the peak of 10.6% experienced in the United States as a whole during the same time period, so do not expect much sympathy from your friends and family. 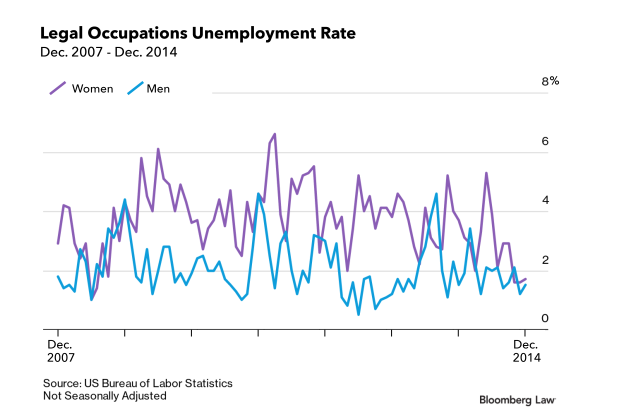 Of course, what we all want to know is whether the Covid-19 downturn will cause legal occupations unemployment to experience the same extended volatility seen after the Great Recession and whether such volatility will disproportionately affect women.

Unfortunately, we do expect extended volatility will be a feature of the Covid-19 economic downturn. In fact, it would not be surprising if the effects of downturn were more significant than last time.

Senior practitioners today experienced the financial burdens associated with the last downturn and may be more risk averse today as a result. To protect their financial security, they may be less willing to hire and retain employees than they were in 2010. We are already seeing big law firms adjust their hiring, retention, promotion, and compensation. The data released today supports the view that this downturn will hit the legal industry hard, as the legal occupations unemployment rate more than doubled over the prior month. This increase hit women more severely than men, with women experiencing a 1.8% increase, compared to the 0.6% increase experienced by men. However, with the continued focus on diversity in law firm lateral attorney hiring, we are hopeful that the gender disparity in legal occupations unemployment rate will be less pronounced in the coming years.

Sara Lord
Analysis Team Lead - Legal Markets
ANALYSIS: Lawyer Jobs Dropped Again in Q1, But There Is Hope
ANALYSIS: What the Covid-19 Downturn Means for Lawyer Careers
ANALYSIS: Lawyer Well-Being Critical During Pandemic
ANALYSIS: Turning Networking Into Netplaying, Once and for All
ANALYSIS: Futurist for Hire — Alt-Legal Jobs React to Recession
© 2022 The Bureau of National Affairs, Inc.
All Rights Reserved