The legal tech field is growing by selling solutions and challenging lawyers’ status quo. But there’s at least one longstanding problem the industry hasn’t solved: the lack of gender diversity in its ranks.

Of the top 50 companies ranked by funding and designated “legal tech” in Crunchbase, sixteen, or 32%, have a female on the executive management team as of Nov. 21. Seven of those with female management also have a female founder, so only 18% of these non-women-founded companies have appointed a woman to executive leadership. 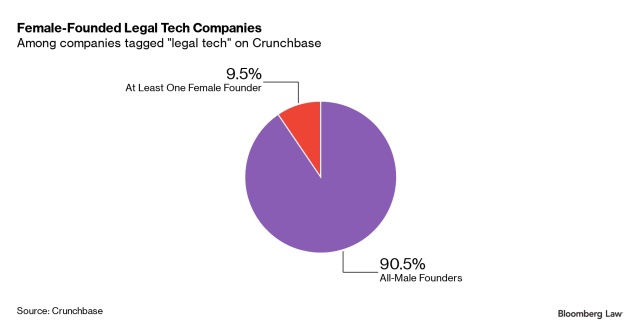 These figures are anecdotal: Crunchbase doesn’t tag every legal tech company as “legal tech,” so some companies may have been missed in determining these ratios. Still, the numbers are disappointing, especially given legal tech’s promise as a growing field for lawyers with different backgrounds.

“Legal tech, from a services perspective and from a subject matter expert perspective, has been a place where the marginalized have gone to live. Women, minorities, basically people who didn’t fit the mold, moved over to tech,” Jeanne Somma, legal insights executive and counsel at Ayfie, a search and text analytics solutions company, said.

Yet legal tech appears to be doing worse on gender diversity than both of the fields from which it sprung.

In 2018, women accounted for 19.6% of law firm equity partners, according to the National Association for Law Placement. Women make up 31% of all general counsel in the U.S., according to Law Geex’s 2019 General Counsel Landscape report.

On the tech side, 56% of tech and healthcare startups have at least one woman in an executive position, according to Silicon Valley Bank’s Women in Technology Leadership survey. 28% of SVB’s 1,377 surveyed companies had at least one female founder.

In other words, the middle of the Venn diagram between legal and tech isn’t pretty for women.

“Legal tech is an industry that has the worst of both legal and tech” on gender diversity, Olga Mack, CEO of contract management software company Parley Pro, said.

The root of the problem may be trickling in from the private equity world as legal tech startups face pressure to fundraise.

“You can’t answer the question of ‘where did the women go? without asking the question about the historic under-investment in legal tech,” Mack said.

“Since there are a relatively few players who make investments in legal tech (though this may be changing) they’re likely going to be on the more conservative side. They’re going to take fewer chances on founders or leadership that doesn’t fill the mold,” Mack said.

Investor bias compounds and affects later stages of a legal tech company’s lifecycle, according to Mack.

“At every turn with a legal tech company’s existence you are faced with this problem from the funding forward. From various exclusive deals that people make, to who exhibits at various events and conferences, to who gets an introduction to the head of the legal department,” Mack said.

Under-funding of female-led companies is a familiar problem in the private equity and venture capital space.

“I think it can all be traced back to [women’s disadvantages in fundraising]. I don’t think that the way that we handle finances and funding and asking for money are really tailored to women,” Somma said. “And that at some point is going to have to change.”

Legal tech may be doing its customers a disservice by remaining so male-dominated.

“Frankly, a lot of the clients that I’m interacting with at the highest levels are women,” Somma said.

“We know that corporate departments have lots of women using legal tech, whether or not they make purchasing decisions. Many women for many reasons go in house earlier, and many of them are increasingly achieving positions of leadership,” Mack said.

Legal tech companies need to be conscious not only of who is buying their products, but of who is using them, according to Mack.

“There’s huge value in having founders and a leadership team that reflects a user base. Not having women on the leadership team is detrimental for a company. Most importantly, it’s terrible for the industry because we know that these products are used by women at a very high rate,” Mack said.

Part of the solution to legal tech’s gender diversity problem could lie with investors recognizing that companies should, to some extent, reflect their customer base.

“One solution has to come from funding sources. When they study this market and look at who the buyers are and who the users are, they must make sure that the company they invest in reflects that customer and user and is sensitive to that perspective,” Mack said.

Buyers of legal technology, too, should be asking questions about the composition of company leadership, according to Mack.

“People who make purchasing decisions should understand that tech is being developed by a certain profile of person, and that’s a challenge for the industry and for their company,” Mack said. “And they really should be conscious in their purchasing decisions.”

According to Somma, having more women in legal tech leadership could help solve one of the industry’s major problems: siloed, single-solution companies and lack of interoperability.

“To me the biggest problem that we have in legal tech is that products are singular things. Technology is a singular thing, workflows are even singular things, and there is no compromise,” Somma said. “There’s no connectivity between different products.”

“It doesn’t make any sense for a company, no matter how big they are, to have 45 different pieces of technology that don’t speak to each other,” Somma said.

Women in the Pipeline

Despite its diversity shortcomings, legal tech is growing, and law schools are increasingly focusing on educating students in legal tech and legal operations. That means a number of young women will soon be entering a field where the deck may be stacked against them.

“For young women who are starting their career, I would say, there are no rules here. It’s the Wild West. It doesn’t matter if you work at a startup with the flattest structure and everybody does everything all the time or you work at the most rigorously structured company. If you are in legal technology services, it is the Wild West and you should land grab until you can’t land grab anymore,” Somma said.

“If you are in this industry long enough, you’re going to learn what it is to serve a client, what they need, how to use technology, how to create workflows, all those things. And the most important thing that you can do is speak up when there’s a problem,” Somma said. “Women do not traditionally step into someone else’s territory or on someone’s toes, but that is very important in this industry. By being proactive you will be successful.”

“I am excited for the field to have so much interest from younger lawyers and graduates. They are much more inclusive, both in terms of demographics, but also more inclusive of professionals who do not have law degrees,” Mack said. “The path will be hard, but I think it’s worth persisting. I think it’s tremendously beneficial for the industry.”