Legal technology—applications and processes designed to address the acknowledged lack of efficiency plaguing legal practice—is a fast-growing market. Companies that focus on optimizing legal processes through technology are springing up and scaling quickly.

According to a report by investment bank Investec examining developed geographic markets, investment in legal technology “startups and scaleups” was around $1 billion last year. 2019 is likely to see even more investment; data compiled by Bloomberg from company disclosures and startup database Crunchbase indicates that legal tech funding in the first quarter of 2019 alone already topped $400 million.

This report will identify the major investing trends from Q1 that are likely to impact the legal industry and practice.

Why keep track of legal tech investment? Because today’s seed-round startup could be tomorrow’s workflow disrupter.

According to Crunchbase data, $400 million was invested in legal tech companies in Q1. Companies with applications in legal, such as artificial intelligence or SaaS companies, that are not designated as “legal” by Crunchbase may have been missed in this roundup. Five additional funding rounds, in Firmex (Canada), Amiqus Resolution (Indonesia), Justika (U.K.), Case Status (U.S.), and Divorceify (U.S.), were for undisclosed amounts. 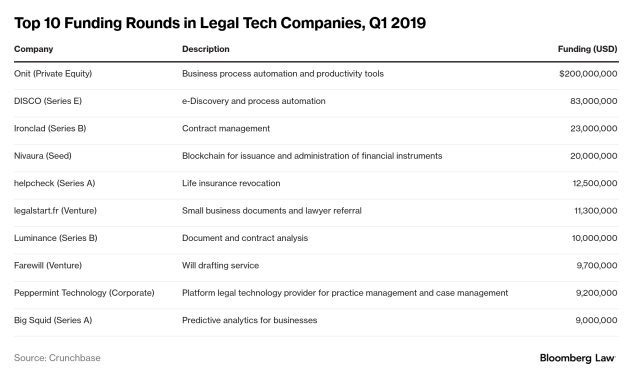 Balkanization is a common criticism of the current state of the legal tech market, with the general understanding that having thousands of individual legal tech companies is not sustainable. Onit and a couple of other companies are aiming for enterprise-wide solutions. DISCO, which raised $83 million in equity funding last quarter, is planning to branch out from e-discovery solutions into optimizing other legal processes. And Peppermint Technology, a UK-based company that offers Microsoft Dynamics-based legal applications in practice, matter, and document management, raised $9.2 million.

Labeling a company “legal tech” says little about what it actually does. So we divided the Q1 companies based on their principal customers.

B2C legal tech companies are those that offer services directly to individuals or small businesses—for example, online drafting services for wills or startup documents. Marketplaces for legal talent, if they refer legal help to individuals rather than companies, would also fall into this category.

The B2B category includes, for example, companies that offer products for document analysis, compliance analytics, contract management, e-billing, or any number of other business functions. 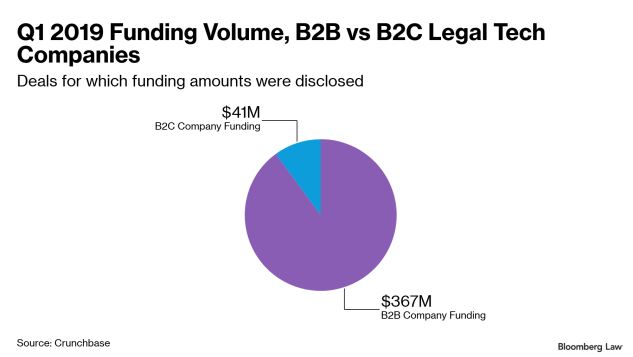 B2C companies operating in the “access to justice” market—delivering affordable legal or legal-related services to consumers—are thriving. But the B2B sector, with solutions addressed to legal departments, law firms, or business enterprises, is heating up more. 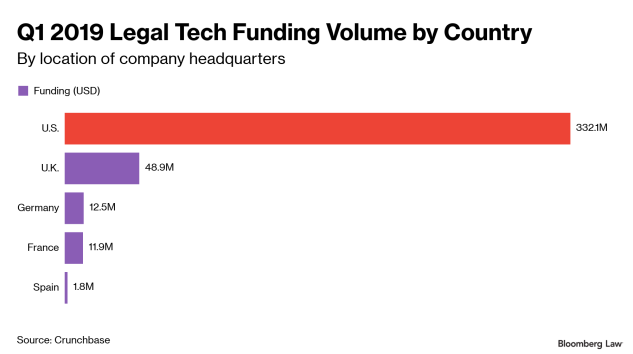 It appears that U.S. legal tech companies have been unhampered by this country’s relatively harsh regulatory environment for legal innovation. The U.K. reformed its attorney rules more than a decade ago, allowing non-attorney-owned “alternative business structures” to engage in legal activities. Most U.S. jurisdictions, however, retain restrictions under the Model Rules of Professional Conduct mandating attorney-owned entities and barring fee-splitting with non-attorneys. Yet U.S. legal tech businesses seem to be avoiding potential ethical traps and thriving, with companies that (probably) don’t provide legal services, but nonetheless take advantage of the ripe innovation market in legal.

Given the current regulatory realities, it is probably not surprising that of the 13 U.S. companies funded in Q1, nine are in the B2B space, where it is potentially easier to offer business services while avoiding the practice of law.

The three B2C companies with the largest investments in Q1 are all based in Europe: Helpcheck (Germany), legalstart.fr (France), and Farewill (U.K.).

Another measure of industry robustness is M&A activity. While most of the deal figures for Q1 went undisclosed, the two transactions that were disclosed were cash deals totaling $305 million.

M&A interest in the e-signature space was notable last quarter.

HelloSign, with annual revenues of $3.5 million according to Owler, was acquired by Dropbox for $230 million. Dropbox, which reportedly has hundreds of millions of users, touted HelloSign’s e-signature and document workflow products as the principal reasons for the acquisition.

Also in Q1, Austrian e-signature company Eversign acquired Docracy, which offers open-sourced legal documents, for an undisclosed amount. Docracy’s annual revenues are estimated by Owler to be $8.4 million. The goal of the deal was to “simplify the signing of documents from start to finish,” Eversign CEO Julian Zehetmayr said in a press release.

Integration from legal document drafting to binding signature, with document workflow tools in between, clearly seems to be the goal of both of these deals. What this means for legal practitioners is that clients may have a growing comfort level with—perhaps even an expectation of—process-automated document collaboration and signatures.

Both Halebury and Cognatio were previously Elevate’s competitors in the markets for “flexible lawyering.” Elevate is also acquiring companies that add to its platform of offerings.

These deals reflect Elevate’s mature position in the race to a single platform legal technology solution. It is likely that the space will continue to see strategic consolidation.

One thing is for certain—legal process optimization isn’t coming, it’s here. What remains to be seen is who will be the largest companies with the widest number of offerings at the party.

Did we miss a big deal in Q1? Have other thoughts on legal technology investment’s impact? Email me at mmcevoy@bloomberglaw.com or connect with me on Twitter: @megmcevoy.