A job seeker hands a resume to a recruiter at a career fair.
Photo by Anthony Lanzilote/Bloomberg via Getty Images

For generations of lawyers, the standard, desired career trajectory was: attend the best law school you can, and then work for the best law firm you can before either becoming a law firm partner or going in-house. Like many other paradigms of the legal profession, consider this model disrupted.

Evolve the Law, the “legal innovation center” developed by blog Above the Law, is holding a career fair on April 24 called “Law Jobs for Humans: A Career Fair for Legal Futurists.” The event’s title reflects the number of artificial intelligence technologies now permeating the legal industry. Of course, humans are still the key participants in the provision of legal services. But, as legal becomes an increasingly multidisciplinary field, only some of those humans are practicing lawyers.

“There has really been a pivot over the last few years,” Christopher E. Pinnington, Canada chair of law firm Dentons and CEO of Nextlaw In-House Solutions, Dentons’ affiliated in-house consulting group, told me. There are “tremendous opportunities for people in the legal industry to leverage their individual diverse backgrounds, experiences, and aspirations in ways that historically wasn’t the case.”

Attendees at the Law Jobs for Humans event will hear about some of the new roles and career paths that are legal or “legal-adjacent.”

“We want to get away from calling them ‘alternative legal jobs,’” Irene Mo, an associate at privacy and data security consulting firm Aleada Consulting and one of the event’s co-chairs told me. “They’re just legal jobs.”

Law Jobs for Humans is also co-chaired by William D. Henderson, a law professor at Indiana University Maurer School of Law and a prolific author, blogger and speaker on the legal market. The event was curated and produced by Dan Lear, former director of industry relations for “new law” company Avvo who now runs his own legal technology consultancy, Right Brain Law.

If all of this sounds a far cry from the eight-year up-or-out BigLaw associate track, that’s because it is. Read on for a snapshot of what the new legal jobs look like in 2019.

Law Jobs of the Future

Attorney and academic Richard Susskind, in Tomorrow’s Lawyers, published in 2013, predicted the fracturing and disruption of the legal industry. But, along with this disruption, Susskind wrote, “there will be…a promising range of new opportunities and new careers for people trained in the law.”

Today, some of Susskind’s job descriptions map well to job titles that exist in the current marketplace, while others don’t. Susskind’s “legal hybrid,” for example, is still more of a role description than a job title and won’t be found on any job board.

Similarly, a search of popular job websites Indeed, Glassdoor and LinkedIn shows that Legal R&D Worker—a resource who Susskind said would focus on “developing new capabilities, techniques, and technologies to deliver legal services”—is not a job title currently in use. Neither is “online dispute resolution practitioner,” which Susskind predicted would comprise specialists who help clients resolve disputes in electronic environments.

“This is a half a generation process, and it’s moving at a pace that frustrates lawyers” because roles and job titles are not yet clear-cut, Henderson said.

Yet, though job titles may vary, some of Susskind’s predicted roles have taken off.

According to data based on jobs listed on legal jobs site Law Crossing as of April 15, 2019, legal project manager roles are abundant (7,116 jobs), as are jobs in legal operations (3,075), legal risk management (1,820), and compliance (1,127) – all job categories that correlate closely to Susskind’s law jobs of the future.

Legal operations roles are a significant part of the alt-legal jobs trend. Legal operations, the movement towards optimizing legal services delivery with a focus on efficiency, is about ten years old.

One such high-level position is at law firm Dentons, which is currently hiring for a Legal Operations Director at its associated consulting group, NextLaw In-House Solutions.

The legal operations director will work with Dentons clients’ legal departments to develop strategic plans, identify meaningful metrics, analyze data, work on vendor procurement strategy, and get involved in a wide range of projects, JoAnne Wakeford, chief client officer at NextLaw In-House told me. The role will be “very similar to what you would see within a law department legal operations role,” Wakeford said.

Despite legal operations’ relative newness, NextLaw In-House has not had much trouble finding candidates with the requisite credentials for the legal operations director role, Wakeford said.

“There are more people within North America who have years of experience in legal ops, but this type of role has existed for years in Europe and the UK as well. We’re finding individuals with two, three years’ experience now,” Wakeford said. “If you would’ve asked me five years ago, I would have said, ‘yes, it’s a challenge to find candidates qualified for this role.’” 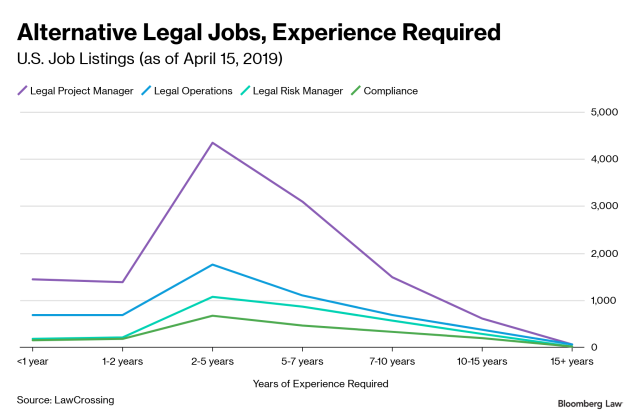 Most of the “new” legal roles found in our review call for two to five years of experience.

Legal recruiting and events firm The Cowen Group has recruited for non-traditional legal roles for at least a decade, based initially around the rise of e-discovery professionals.

It’s not surprising that these roles are mainly director-level or above, since the Cowen Group focuses on high-level placements within firms and companies.

“Chief data officers are a big deal,” Schwartz said. And “chief innovation officer is a title that more people are heavily investing in in law firms.”

The Cowen Group is also tracking the rise of innovation counsel within corporate departments, as well as a legal chief of staff, who works hand-in-hand with a general counsel, Schwartz said.

Where Are These Roles?

The majority of job listings in our search were available in corporate settings. 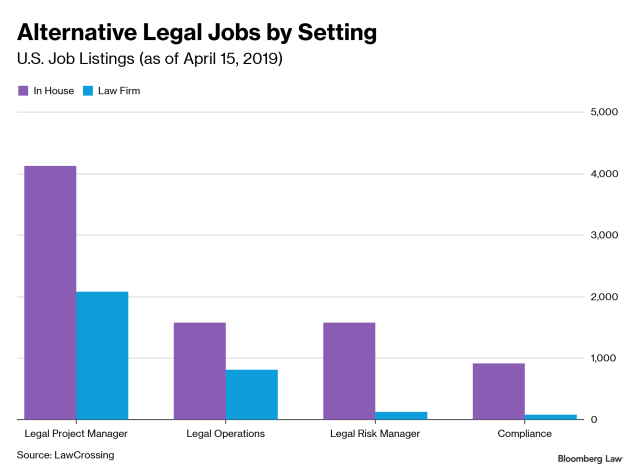 The typical trajectory is for lawyers to be trained in law firms before moving in-house.

Henderson said he doesn’t think the new crop of legal roles will adversely affect how well lawyers are trained for in-house positions. As a professor, Henderson is not discouraging students from going the traditional law firm route, but more students are driving toward non-traditional legal careers.

“If you look at the market for 2000-billable-hour jobs, they’ve been flatlining,” Henderson said.

When Mo began interviewing for in-house positions, employers liked her background in innovation and process management, and some liked that she hadn’t been at a law firm.

“In-house departments feel like they have to retrain people not to write a five-page memo when an email will suffice,” Mo said.

Among law graduates, the numbers show that as the legal hiring market recovers post-recession, law jobs in business settings are, in fact, trending down slightly.

A National Association for Law Placement report on employment outcomes for the law school class of 2017, the most recent class for which data is available, shows that the number of business jobs secured by graduates went down two percentage points, to 13.9 percent, or 4,179 people. This is down from an historic high of 18.4 percent of graduates taking business jobs in 2013 due to the recession.

James G. Leipold, director of NALP, told Bloomberg Law that this shows that, as the economy recovers, if there are practicing law jobs to be had, graduates are taking those first.

Still, Leipold sees room for growth in these roles. “To the extent that [emerging legal jobs] are entrepreneurial, to the extent they exist within corporations that have a career path and provide a lifestyle that’s not 24/7, I think they’re appealing to a big group of the current generation of students,” Leipold said. 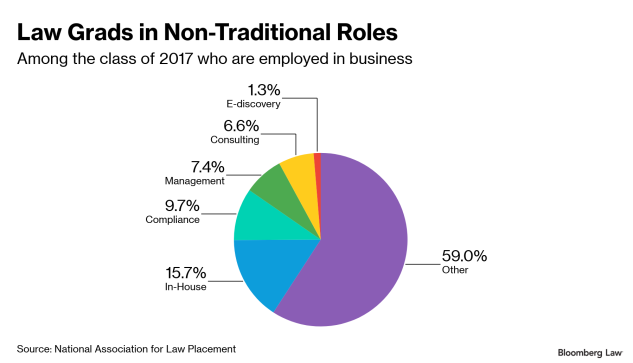 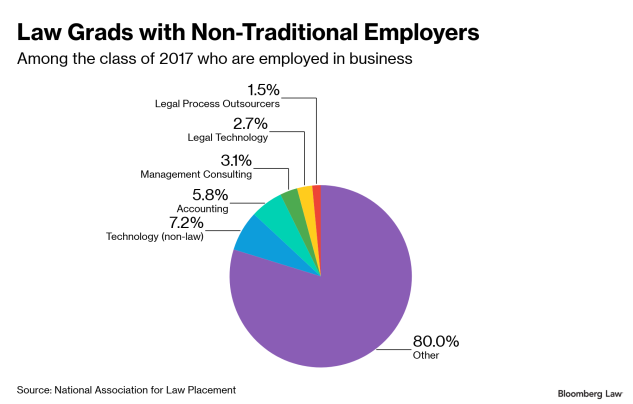 Mo was one such student. With degrees in mathematics and economics prior to law school, Mo attended Michigan State University College of Law, which strives to graduate tech-savvy lawyers. While in law school, Mo helped launch Michigan State’s LegalRnD—The Center for Legal Services Innovation, which focuses on process improvement to increase access to legal services.

Mo is now an associate at Aleada Consulting in Silicon Valley, where she advises clients on privacy, data protection, and information security issues.

“Irene is doing a job that didn’t exist 15 years ago,” Henderson said.

In terms of lateral movement into alt-legal, Schwartz said, “we really value the expertise of somebody who is in legal as a second career and has some business experience or technology work experience.”

In some cases, these lawyers with a background in data science, technology, or quantitative fields are so rare they’ve been termed “unicorns.”

New law jobs may also help fill out the middle of the historically bi-modal salary curve among law graduates.

For attorneys just out of law school, “there are lot of people making between $45 and $65k, and then a handful now making $190k, and nothing much in the middle,” Leipold said.

CLOC, the Corporate Legal Operations Consortium, recently released a salary survey for legal ops roles. The survey, fielded from respondents in 13 countries, found that legal ops professionals across all levels make an average of $163,000, including salary, bonuses, and stock. Legal operations professionals with one to five years of experience make, on average, $144,589 annually, while legal ops employees with 16 or more years earn an average of $209,667 annually.

CLOC found that legal operations professionals with a JD, LLB or LLM were some of the highest-compensated employees.

The Cowen Group also tracks salary data across a range of non-traditional legal roles, with many median salaries above six figures.

Perhaps one of the biggest changes afoot is the cultural shift in the legal industry.

“One of the exciting things about legal operations is that it is opening the eyes of the legal profession, which has tended to be conservative and focused on the presumed paramountcy of the training of lawyers,” Pinnington said. “It’s opening doors to a more holistic and inclusive approach to providing legal services.”

Law students have always taken jobs in business that were not strictly legal, particularly in recessions.

“The forces that have changed every industry, the forces of technology and the internet and globalization, got to the law late,” Leipold said. “The recession accelerated these developments because corporations had an increased need to really cut their legal spend. Outsourcing, systems, technology and AI began to provide pathways for doing that. That’s not going backwards.”

Combine these developments with the reportedly high value placed on work-life balance by millennials, and a further erosion of the traditional law firm track seems likely.

Decreasingly are non-practicing legal roles seen as “second best.” And, with the rise of Silicon Valley startup culture giving innovation and entrepreneurship a certain cachet, there is room for these technology-driven positions to take on a new cool. You know, among the humans.