Most attorneys believe their firm is missing the mark in how it compensates first-year associates—but they’re split on whether that compensation is too high or too low, a recent Bloomberg Law survey showed. As a follow-up to my analysis of these results last month, I wanted to learn more about these respondents—where they work, what their roles are—in hopes that it would shed some additional light on this unanticipated split.

I suspected that most attorneys who said that they feel first-years are overpaid wouldn’t be associate attorneys, and they wouldn’t be working in small law firms, either—and the survey data bore that out. 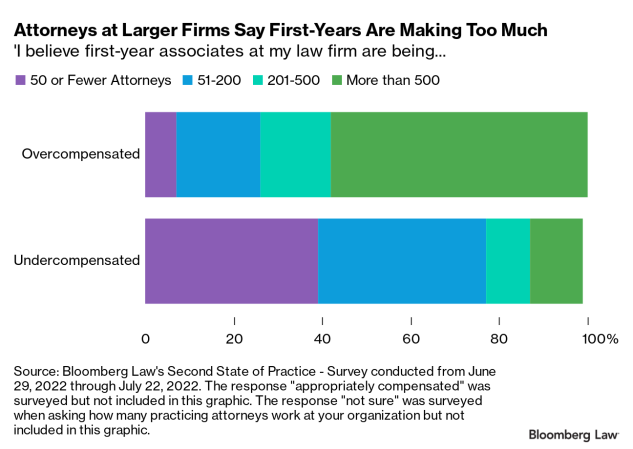 A few underlying reasons can certainly come into play here with a difference this noticeable. First, bigger firms simply may be able to pay their associates more from the start. The number of attorneys working at a firm typically plays a part in the firm’s annual revenue and, in turn, can affect the amount of money they have available to pay their employees. And the data back up that theory.

The average starting salary for first-year associates at firms with more than 500 attorneys, according to the best estimates of those respondents, is about $194,300. For first-years at firms with 50 or fewer attorneys, respondents best estimated the average starting salary to be less than half that amount (approximately $91,600.) A perceived difference of over $100,000 could certainly account for a difference in opinions.

Additionally, “wage wars” have been running rampant through the legal industry—particularly in larger law firms where associates (including first-years) have been awarded historically high salaries. Starting salaries of this magnitude could leave a sour taste in the mouth of an established attorney, especially if they have been working at the organization for quite a while—even though a wage war may mean a bigger payout for all attorneys at the firm at the end of the day. And for the most part, it has: These hefty first-year salaries have resulted in increased salary scales for attorneys already working at these large firms. 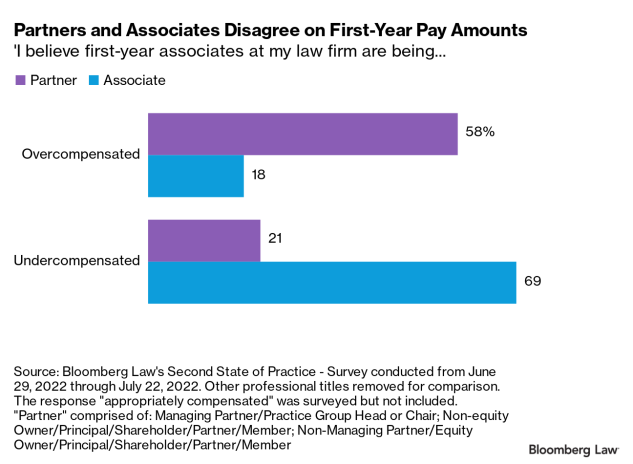 In this instance, it’s unlikely that the divide is driven by large discrepancies in estimated starting salaries. Partners best estimated, on average, that first-years at their firm are starting out making approximately $138,500, and the best estimates from associates averaged only about $500 higher. So what exactly could cause such a disconnect between partners and associates? 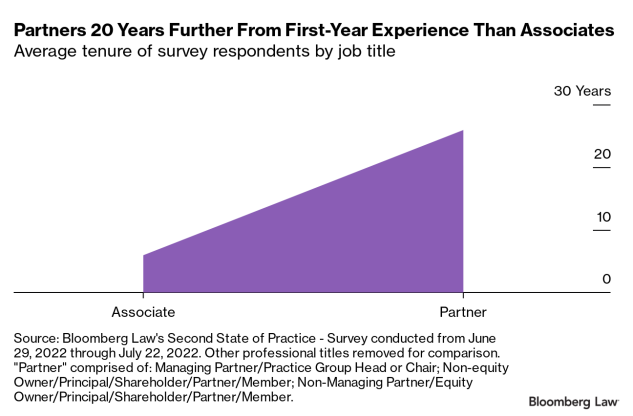 Twenty additional years in practice could certainly contribute to that disconnect. Of overall survey respondents, associates said they have been in practice for six years, on average. For those in partner positions, survey data indicates they are more tenured in the profession—reporting an overall average of 26 years in practice—and therefore perhaps less likely to relate to the realities of being a first-year attorney.

Specifically, more than half of respondents (55%) who felt first-years were undercompensated identified as an associate who’s been in practice for only seven years or less. As lawyers who are closer to the first-year experience than partners are, these associates can likely remember more vividly the burdensome workloads and long days that got them to where they are. And they can likely relate to feeling undercompensated for the work they did not too long ago.

Apart from being more temporally removed than associates, it’s likely that partners are also less familiar with the day-to-day tasks of first-year attorneys. Partners are often the ones delegating the work to other attorneys, which means they could be less likely to relate to the tediousness of the first-year workload.

Since partners are the “big dogs” at the firm, their knowledge and time are often saved for more complex, client-facing issues. They’re also more likely than newer attorneys to spend time on nonbillable tasks such as firm management, which is a burdensome project in itself that could make them less in tune with the work of new attorneys. It’s possible that this much of a disconnect from first-year tasks has partners more likely to say that first-year compensation is exorbitant.