Every deal lawyer knows which clauses are most important when working through a transaction: their own. But, according to Bloomberg Law’s Commercial Deal Insights Survey 2020, no one is really that special. We sliced the results by in-house vs. firm lawyer, by subject matter expertise, and over a broad range of contract types. Across the community of deal lawyers, the same four clause types were always on the table: indemnification; business terms; limitations of liability/damages; and representations & warranties/covenants.

Agreement on the Big Four

The survey focused on the cycle of contract negotiation, asking about contract lawyers’ experiences with specific contract clauses and their perceptions of how those efforts played out in their organizations and in general. In our initial questions, we teased out how often deal lawyers draft, revise, or negotiate certain clauses; which are considered the most risky; and which are the most highly negotiated. In response to each of these prompts, contract lawyers gave similarly high rank to the same four categories of provisions: indemnification; business terms; limitations of liability, damages and remedies (which we explicitly included in this grouping in our survey); and representations & warranties/covenants. For example, each of the four provisions has been drafted, revised, or negotiated by more than eight out of 10 respondents in the past six months. 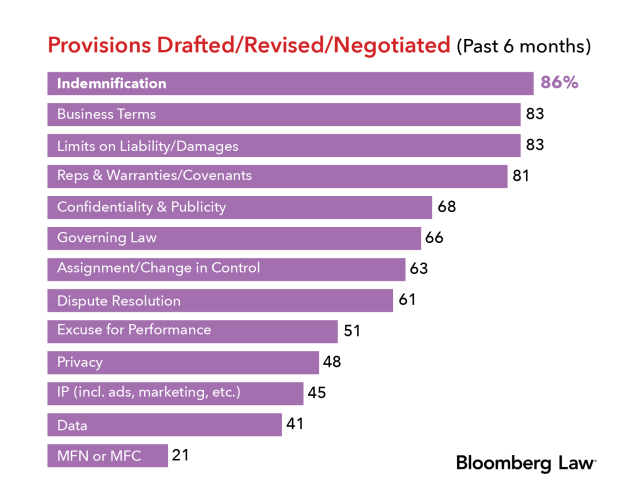 This high level of consensus may allow contract lawyers to engage with each other more efficiently across the table, as they have a good sense of how their counterparts may also be tackling their own contract review. But what happens when they move beyond the consensus?

While lawyers broadly agree on the clauses that demand the most attention, they don’t agree about which provisions to de-prioritize. As might be expected, this divergence often depends on the type of contract the lawyer is negotiating—but in some cases, the work environment seems to have more impact.

In corporate legal departments, contract drafters say that, in particular, they are spending too much time on indemnification and limitations on liability/damages (including remedies)—the same clauses that they label as the most important. They also express concern that assignment/change of control and dispute resolution provisions are overly negotiated—although dispute resolution is also cited as an under-negotiated provision as well.

While law firm lawyers agree that too much attention is paid to indemnification clauses, they call out governing law as an issue that garners more attention than they feel is needed.

Interestingly, but not necessarily surprisingly, firm lawyers as a cohort disagree about the level of attention given to privacy clauses—they are either over-negotiated or under-negotiated. In-house counsel respondents don’t rate privacy at either extreme. The diagram below illustrates the myriad, and occasionally divergent, classifications assigned by practitioners. 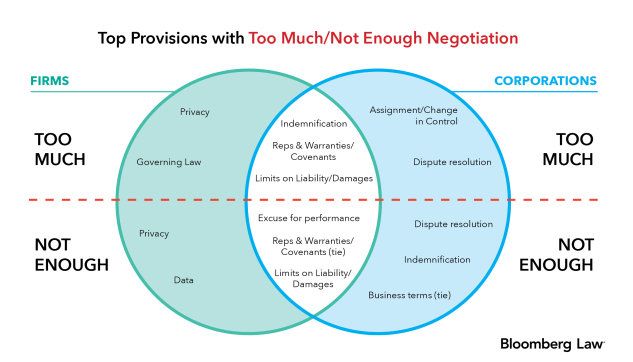 Lawyers in general do tend to agree about the reasons why provisions of a contract are over- or under-negotiated: More than two-thirds cite misalignment on value or risk as a cause.

Non-lawyers often think of commercial terms as being the make-or-break aspect of a contract negotiation. Contract lawyers do not always agree. Four out of 10 respondents say that they felt their organization wanted them to spend more time revising and negotiating business terms than they expected to do.

In addition, some 45% of lawyers blamed differences between the parties about the commercial terms of the deal as a reason why contract provisions are over- or under-negotiated.

These results suggest that lawyers might benefit from early engagement in business discussions that they feel could have downstream impacts—especially if they feel the difference of approach could influence the drafting process and result in greater stakeholder satisfaction with their work.

What Do Lawyers Mean by ‘High Risk’?

Contract lawyers agree that high risk generally means potential for litigation. Almost four in five (79%) of our survey respondents (83% of outside counsel) say that concern about lawsuits is the main reason they identify a contract provision as high risk.

There is less consensus about the number two risk. More than half say that the risk derives from concerns about additional costs; about half identify the potential for tax or other financial liability, and potential for breach of other contracts or obligations.

Only 10% of survey respondents say that high-risk provisions implicate potential violations of company policy. While only 5% overall say that they have concerns about potential criminal liability, it appears that in-house counsel diverge from outside counsel on this point: More than twice the percentage, 11%, of in-house counsel surveyed, consider that high-risk provisions pose a risk of criminal liability.

The Deal Insights Survey report consists of responses from 429 practicing lawyers. About two-thirds were attorneys in private practice, and one-third practice in-house. Large (100+ attorneys) law firms and corporate departments were the most represented. A majority of respondents indicated that their principal practice areas were commercial contracts or corporate, and approximately one-third cited M&A or real estate as areas of practice. Respondents identified services agreements as the most prevalent type of contract they recently negotiated or drafted. 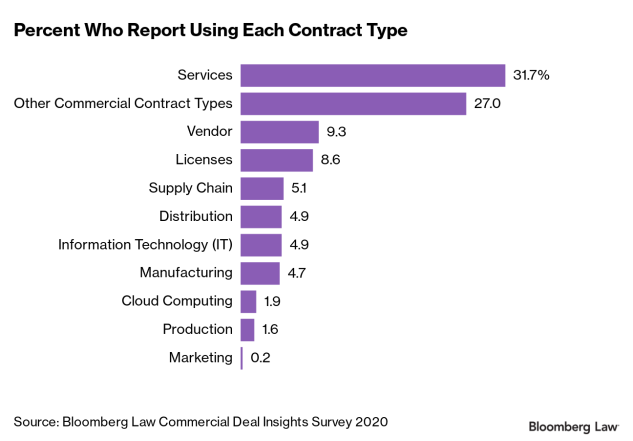 For more information and data, take a look at the Executive Summary for Bloomberg Law’s Commercial Deal Insights Survey 2020.