Attorneys are asking for $2 million in attorneys' fees from Oasis Outsourcing after settling a 401(k) case for $6 million.
Scott Eells/Bloomberg via Getty Images

Alternative fee arrangements—whereby law firms charge their clients on something other than a straight hourly billing basis—are seen as the next frontier in law firm profitability. With increasing demands from in-house legal departments to provide cost certainty and the time needed for certain legal tasks sheared by technology, AFAs would seem to be a key part of law firms’ new “business as usual.”

And, while models like fixed fees, risk-sharing arrangements, and portfolio pricing are growing in popularity, interviews with pricing and profitability professionals at top law firms revealed that the definition of what constitutes an AFA is shifting.

This article, the first in a two-part series, will take a look at adoption—and increasing complexity—of alternative fee arrangements.

Bloomberg Law’s 2019 Legal Operations & Technology Survey asked respondents whether they had implemented any changes to their billing model as their use of legal technology increased. 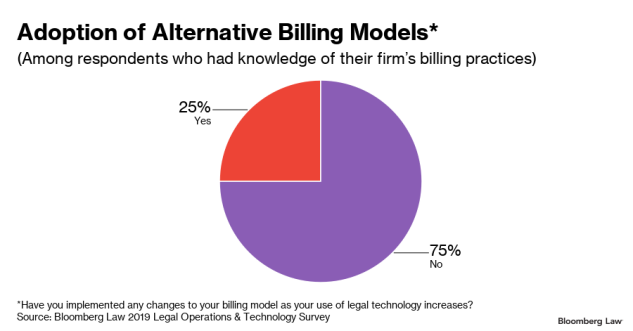 Among survey respondents who had knowledge of their firm’s billing approach, only one-quarter said they had made alterations to respond to technology.

It’s possible that response rates were lower because of the way the question was phrased. We assumed that technology’s optimization of legal processes would be a main motivator for firms to use AFAs. Fixed fees, a common AFA, are a great way to bill profitably for tasks that may take very little time due to automation.

In fact, it appears that client demand for cost certainty and efficiency, rather than legal technology, is the main driver of AFAs.

“If you look at the maturation of alternative fee arrangements and their adoption in legal, you can trace it back to the great recession and the resulting budget pressures on corporate legal to get a handle on their spend,” Um said.

According to David Fries, chief profitability officer at Orrick, these recession-prompted shifts will be permanent.

“Early in the financial crisis, we viewed the demand by clients for greater cost certainty and greater alignment of interests to be something that was not a passing fad,” Fries said. “There were a number of things coming out of the financial crisis around pricing, around clients’ building of larger in-house legal teams and the development of professional in-house support teams that are here to stay.”

Nicole Auerbach, founding partner of both Valorem Law, an alternative-fee-arrangement-based law firm, and new firm ElevateNext, the law firm arm of law company Elevate Services, agreed that AFA adoption in traditional firms is likely low and that it is client-driven.

“I don’t think that there’s a ton of adoption [of AFAs] on a regular basis in most firms. And where there is adoption, I think it’s coming from the client,” Auerbach said. 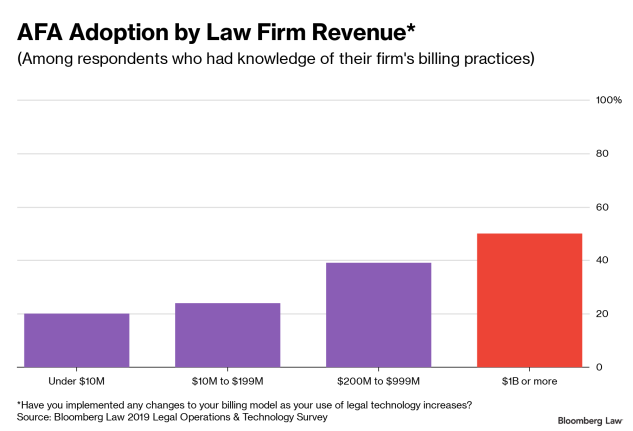 Bloomberg Law’s survey data showed that there is a direct relationship between law firm revenue and adoption of AFAs. Half of respondents at $1 billion-plus revenue firms with knowledge of billing approaches said their firms had adopted alternative billing models.

The correlation makes sense. Larger law firms have been beefing up legal project management and pricing departments that support AFAs.

“It is starting to change. You find there are people in a role like head of pricing or people whose job includes a focus on pricing. And I think those firms might be far more sophisticated across the board,” Auerbach said.

According to Kalmus, “Fixed fee arrangements for high-value matters” are the top AFA they are seeing. “Portfolio work is also really popular, being able to bundle up high volume work [over months or a year] and achieve a fixed and competitive price in relation to that work.”

“We’re very familiar with all kinds of alternative fee arrangements or value based billing arrangements,” Suzanne Hawkins, global director of client value for Reed Smith, said. “We do fixed fee by matter, fixed fee by phase, flat fees, portfolio pricing that combines a number of matters for one client of one type. We also do broken deal discounts, blended rates, and retainer arrangements.”

“Overall, probably the fastest-growing segment of AFAs includes some type of risk sharing, tied to success and/or budget,” Fries said.

According to Um, volume discounts are a popular model for Baker McKenzie clients, as are fixed-fee and capped-fee pricing models. Um calls these “budget-based models,” which are still built upon and tied to an hourly rate.

“We are exploring more value-based models that pull together different components of existing AFAs,” Um said.

“Clients love when we have a bonus or a hold-back amount,” Auerbach said. “Typically we do it across the case so it would be a one-time thing, so that the client always knows that our incentives are aligned with them.”

In terms of industry sector trends, Kalmus noted that AFAs are most popular among clients in “industries that have substantial external legal spends.” Pharmaceutical companies are some of PERSUIT’s biggest clients, Kalmus said, as are financial services companies. AFAs are also popular in the retail industry, because it’s a low-margin business focused on cutting costs, Kalmus said.

According to Um, “AFAs are being explored more by clients in highly regulated industries that face relatively greater levels of compliance risk.”

The definition of what constitutes an AFA is currently fluid in the market. Are blended rates considered an AFA? What about capped fees subject to a budget?

“I’ve seen surveys that include a variety of clearly hourly arrangements such as blended rates and volume discounts as AFAs,” Fries said. “From my perspective, to be an AFA there needs to be an element of cost certainty, risk-sharing, or aligned interests.”

“Volume discounts, which are particularly common between the largest purchasers of legal services and their key law firms, can be very effective win-win arrangements for both clients and law firms by leading to increased efficiencies and driving down costs on both sides, but I don’t think of them as an AFA,” Fries said.

There is also a lack of consensus on whether AFAs are necessarily the same as “value-based” billing models.

“To me what value really means is what does the client value?” Um said. “Certainly that can be a success fee based on an outcome, but it can also be a success fee based on quality of experience, rated along metrics that are agreed upon at the outset. The client perception of how commercial the advice is, how the advice is packaged into work product that is easily consumable. These are service delivery attributes that can be of great value to the end user of services. If that is something they value enough to seek proactively, then I believe clients should think about how to reward those behaviors.”

Whatever the precise definition of AFAs, pricing professionals agree that new pricing models must go along with new ways of scoping, phasing, and managing legal work.

“I’m a big proponent of pairing packaging and pricing together,” Um said. “If legal services are delivered the exact same way they’ve always been, it often doesn’t make sense to move it to a completely different pricing model. Sophisticated legal buy is a two-way street where the firm and the client really have to be in step and in tandem with each other.”

[Look for Part 2 in this series, which will explore firms’ persistent dependence on billable hour models—even while increasingly publicizing their use of AFAs—and will address technology and data challenges with pricing of legal matters.]