In April 2020, the federal government and other jurisdictions announced moratoria on evictions from rental properties, but offered no financial assistance for unpaid landlords. Since then, many landlords have rightly lamented, “What about us?”

Then, just before Christmas, the Consolidated Appropriations Act of 2021 (CAA 2021) was signed into law, with several lease- and rent-related bankruptcy amendments. While the amendments appear to provide a small salve for commercial landlords, they extend the post-petition limbo for landlords of non-residential properties. The CAA 2021 will leave many landlords with bankrupt tenants still wondering “What about us?”

A Christmas Gift of Preference Defense

In bankruptcy, a trustee or debtor may avoid, or claw back, payments the debtor made before filing bankruptcy. Among other requirements, this avoidance power is limited to payments made in the 90-day (or one-year for insiders) period preceding the bankruptcy on an antecedent, or pre-existing, debt in excess of $6,825. These preference actions are fairly common in bankruptcy. Of the 1,263 adversary proceedings, or bankruptcy lawsuits, filed with the Bankruptcy Court for the District of Delaware in 2019, 72% were preference actions. Similarly, a sizeable percentage of adversary proceedings in the Southern District of New York (54%) and Southern District of Texas (29%), the two next most popular venues for commercial bankruptcies, also were preference cases. 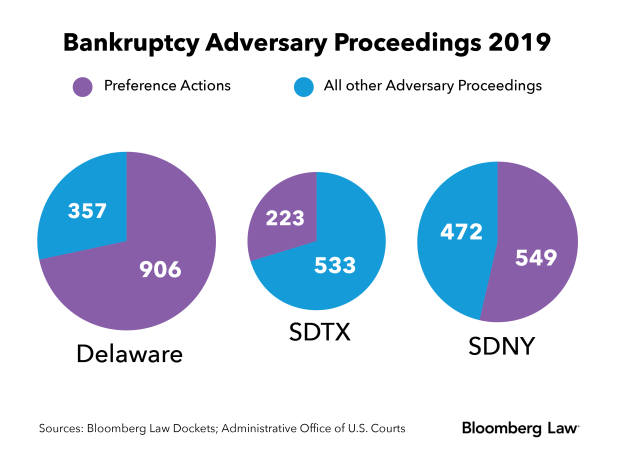 The CAA 2021 amendments specifically exempt certain “covered payments of rental arrearages” from clawback as preferential transfers as long as the amounts are, essentially, for non-residential property rents, deferred on or after March 13, 2020, and do not exceed the amount of rents due under the lease prior to that date.

A Beautifully Wrapped But Empty Box?

At first blush, this appears to be a boon for long-suffering landlords. Landlords could, theoretically, be paid in full and narrowly escape avoidance by invoking this new affirmative defense. In reality, however, landlords are rarely targeted for avoidance of preferential transfers. Nationwide, there have been fewer than 20 adversary proceedings filed over the past decade to claw back preferential payments related to commercial rent payments, and those were almost exclusively filed in Chapter 7 cases.

There could be several reasons for the disproportionately small number of preference actions involving rents. First, some tenant-debtors prioritize rent even in times of distress, and timely rent payments would not qualify as preferential transfers. Also, bankruptcy offers a unique benefit to tenants: the ability to assume or reject unexpired leases. Tenants of commercial property are usually sophisticated enough to ascertain the feasibility of assuming or rejecting a lease prior to filing bankruptcy. Most of these tenant-debtors who expect to reject a lease are not going to pay months of back rents on the eve of bankruptcy; therefore, these unpaid landlords have no preference exposure. For landlords of tenant-debtors who are behind on rent but plan to assume the lease, there is the “Kiwi Defense,” which provides that unsecured creditors whose claims are paid in full, post-petition and with proper court authorization (e.g. lease assumption), may not then be pursued for preferential transfers. Hence, if a debtor pays a landlord for past-due rents on the eve of bankruptcy and then assumes the lease, the landlord will still likely have no preference exposure.

As a result, there are few realistic scenarios wherein landlords would even have the opportunity to invoke CAA 2021’s new preference defense.

The new preference defense also comes with limitations. The covered payment cannot exceed amounts that would ordinarily be due under the lease as it existed before March 13, 2020. Moreover, the “covered payment” cannot include “fees, penalties and interest” over and above what would normally be due under the lease if the debtor was paying on time. Accordingly, if the landlord charged the tenant anything extra for deferring rent, those charges are vulnerable to clawback.

Debtors filing Chapter 11 pursuant to subchapter V now have an additional 60 days, for a total of 120, to pay post-petition rent, and nonresidential tenants in all cases have an additional 90 days to assume or reject the lease. Congress probably extended these deadlines in order to give bankrupt small businesses more time to reorganize. However, for landlords who have also been struggling to pay mortgages and maintain properties during the pandemic, these extensions exacerbate that problem by preventing the landlord from filling that space with a reliably paying tenant.

Only time will reveal the true utility of the amendments. Perhaps there are not as many would-be tenants beating down the doors to occupy nonresidential spaces, and the landlords will benefit from debtors having more time to make good on the rent. The predicted “eviction tsunami” may materialize and result in an increase of preference actions targeted at landlords and payments of past-due rents, and many landlords will be able to shield themselves with this new affirmative defense.

But at this point, we just do not find these CAA 2021 bankruptcy amendments to be nearly as beneficial for the targeted demographic as, for example, the CARES Act subchapter V amendments. How landlords fare under these changes will be a trend to watch until the amendments expire in two years.