Many of us might feel a little whiplash after last quarter’s significant decline in the IPO market.

A combination of the worst inflation in 40 years, the beginning of an expected long period of continual interest rates increases by the Federal Reserve, and a raft of uncertainty attributable to global crises (e.g., war in Ukraine, sanctions on Russia, including oil and gas scarcity, a continuing pandemic, rapidly worsening global warming, supply chain disruptions) have subdued an amazing run in IPOs since government efforts began in earnest to mitigate the economic effects of the pandemic.

SPAC IPOs—which still represent more than half of all IPOs—are even more at risk than traditional IPOs, and may be headed even lower in future quarters as the market digests the SEC’s recent very significant proposed new rules designed to rein in SPACs.

A year-over-year comparison of first quarter IPO performance tells both an illuminating and a misleading story. 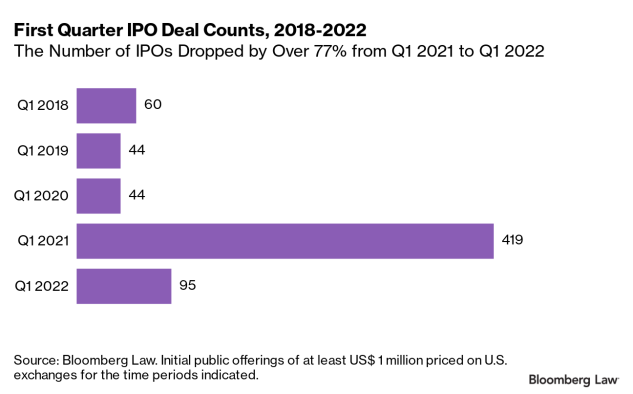 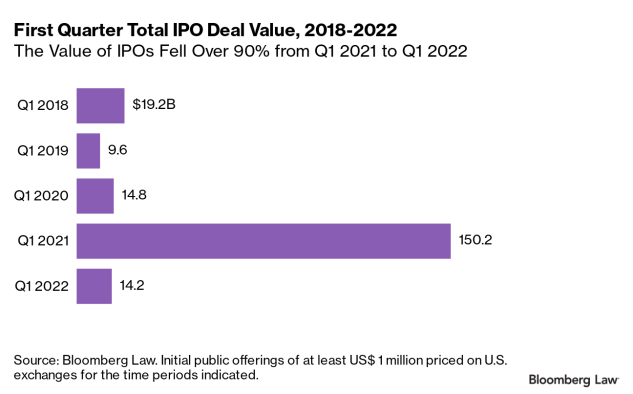 But the first quarter a year ago is misleading as a benchmark. That time period was absolutely bonkers for the IPO market. It was the best quarter ever for IPOs—and by a significant margin—fueled by easy money, courtesy of the Federal Reserve’s efforts to keep the economy moving against the significant headwinds caused by the pandemic.

A look at the larger historical picture of recent first quarters provides some perspective. In terms of capital raised, the first quarter of this year is on par with the same period in 2020 and exceeds 2019. Deal count appears even more favorable against recent history, with the first quarter more than doubling the counts of 2019 and 2020. A return to an IPO market churning out newly minted public companies at a rate in line with its historical performance isn’t a cause for consternation.

While the market for traditional IPOs appears to be recalibrating back to historically normal volumes, the future of special purpose acquisition companies (SPACs) could be in for a rougher ride.

The number of failed SPAC mergers, or de–SPACs, rose substantially in the third quarter of 2021 and remains elevated. One explanation is that SPACs are having considerable trouble finding suitable merger partners. At least 22 deals have fallen through in the nine months comprising the most recent three quarters, compared to 26 reverse merger deals that failed in the more than five years before this spike. Whenever SPACs have difficulties de–SPACing, it sends shock waves through the SPAC industry, adversely affecting investor appetite for more SPACs going public.

Even more threatening to the SPAC market are new rules and amendments proposed by the Securities and Exchange Commission on March 30. Although any final rules the Commission may adopt could vary substantially from the proposed version, the proposed rules lay down a marker for SPACs, telling them that the Commission intends to take an aggressive, prescriptive approach to tightening the rules that the agency applies to blank check companies generally—and to SPACs in particular.

If those proposed rules are adopted, they would significantly expand the potential liability of SPACs, SPAC merger target companies (if the parties reach an agreement on a combination deal), and the investment banks that underwrite a SPAC’s IPO. In a wide range of instances, the proposed rules would also make underwriters potentially liable in later financings by the public SPAC—including the de-SPAC transaction—as if they were also an underwriter in those financings.

Underwriters bear substantial liability risk in initial public offerings. To extend their liability to potentially much more problematic later transactions in which they played only a tangential role is beyond what the market expects and exceeds the level of risk investment banks are likely willing to assume.

Already, underwriters such as Citi have temporarily paused their underwriting of SPAC IPOs until they get more clarity on the potential legal risks they face. Practically speaking, this could mean that many investment banks will refuse to underwrite SPAC initial public offerings until the Commission adopts final rules. The pause could be made permanent if the proposed rules get adopted as written, effectively killing the SPAC market.

A ‘SPACuration’ Point for the IPO Market?

Have we reached peak SPAC? The market feels saturated by them.

SPACs were at their peak a year ago. They peaked not only in the number of their IPOs and the total value of the capital those IPOs raised, but also as a percentage of the larger IPO market, with an astonishing 71.6%. 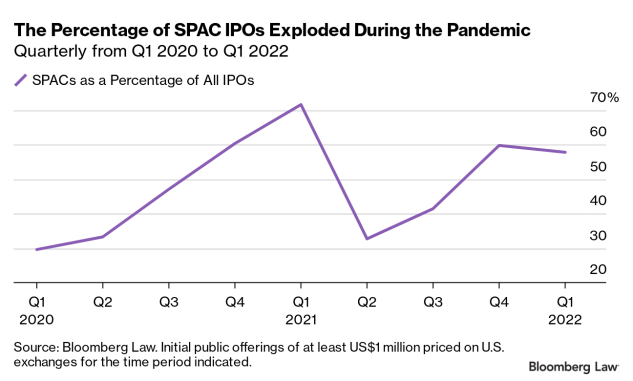 The graphic above shows how far SPACs have come in about two years’ time. SPAC IPOs passed traditional IPOs for the first time in the fourth quarter of 2020, totaling over 60% of completed IPOs. They have since declined but still outranked traditional IPOs with 57.9% of the market in the most recently completed quarter.

The Road to IPO Likely Gets Rougher From Here

The headwinds facing the IPO market only look to strengthen near-term. Half-point interest rate increases by the Federal Reserve, rather than the usual 25 basis points, now appear likely. The Fed is looking into reducing its enormous balance sheet of bond holdings, which would also have the effect of making credit more expensive. Tightening financial conditions is an essential part of bringing inflation under control, and that will necessitate more pain for the stock market—including IPOs. If the recent prediction by Deutsche Bank that the U.S. economy will enter a recession next year proves prescient, investors will have to patiently wait for the good times to roll again.