A GFL Environmental Inc. garbage truck sits on a street during morning waste pickup at a residential neighborhood in Toronto, Ontario, Canada, on Thursday, Oct. 24, 2019. GFL, North America's fourth-largest waste hauler by revenue, seeks to raise as much as $2.1 billion in what would be the largest initial public offering in Canada since 2004.
Photographer: Cole Burston/Bloomberg

One offering of interest is a pending IPO by Pershing Square Tontine Holdings. That SPAC is backed by Bill Ackman’s hedge fund and seeks to raise $3 billion in the offering and $6.45 billion overall. If successful, it would be the largest-ever SPAC public stock offering.

A SPAC is an investment vehicle that takes the form of a shell corporation. It searches for a target company with which to conduct a reverse merger.

The short answer to this question is that there is more investment cash available in the U.S. economy. The Federal Reserve’s recent stimulus actions are providing a floor for asset values. Much as the Fed’s quantitative easing during the 2008 financial crisis gave birth to an era of cheap money and a bull market in equities with unprecedented endurance, its current stimulus programs arguably encourage increased risk taking because the Fed has significantly diminished the downside risk to investors. This stimulus may be a factor in the increasing size of recent deals.

The number of IPOs on U.S. exchanges has only modestly increased since the dot-com bubble burst in 2000. The market has grown because the size of deals has grown, not their count. In the 1990s, smaller deals were the norm, but ever-larger deals has been the trend in recent years. 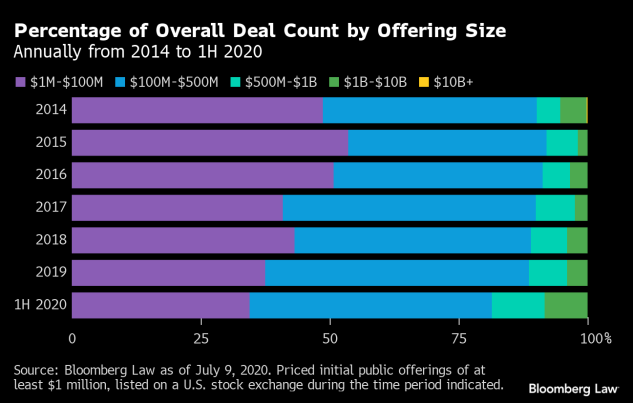 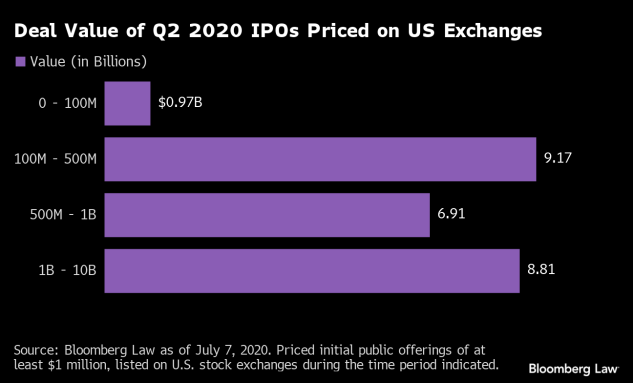 Large IPOs have reached near-parity with smaller offerings in terms of amounts raised. Offerings raising between $1B and $10B raised a total of $8.81B from only five deals in the second quarter. The next smaller range, $500M–$1B, raised $6.91B on 10 IPOs. It took 36 deals for offerings raising between $100M–$500M to raise $9.17B, only modestly more than the largest pricing group. The smallest offering size of under $100M raised less than $1B on 22 IPOs in the quarter.