What is Silicon Valley buying? Looking at the top five most lucrative Silicon Valley firms, as ranked by the Fenwick – Bloomberg Law SV 150 List, Google’s parent Alphabet, Inc. is the most active in mergers and acquisitions. Apple, Inc. takes second place. For both tech giants, the acquisitions suggest a current strategy to take over a diverse variety of startups and make large strategic purchases of lines of business and intellectual property. Google’s acquisitions are a part of its effort to grow Google Cloud, while Apple seems to be on a path to bringing key components in-house so it will no longer have to rely on third-parties (e.g., 5G and power management).

How the Silicon Valley Giants Stack Up in M&A

Since the beginning of 2018, Apple, the Silicon Valley firm with the highest revenue for 2018, has announced fewer acquisitions than second-ranked Google. Since January 2018, Google has announced 25 deals; Apple, 17; and Intel Corporation, 15. By contrast, during the same period, Facebook, Inc. was involved in 6 deals, and HP, Inc. was involved in two deals. The majority of these deals’ financial terms, including deal value, have not been disclosed. 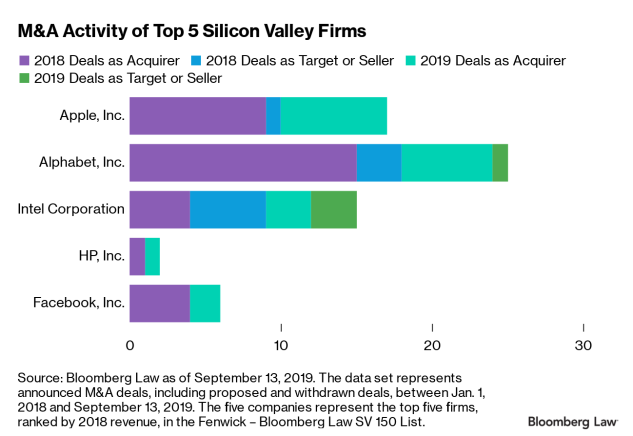 The gap in M&A activity between Google, Apple and Intel and less-acquisitive companies Facebook and HP is striking. Also significant is the role that the tech companies are playing: Google and Apple’s M&A activity overwhelmingly consists of acquisitions. 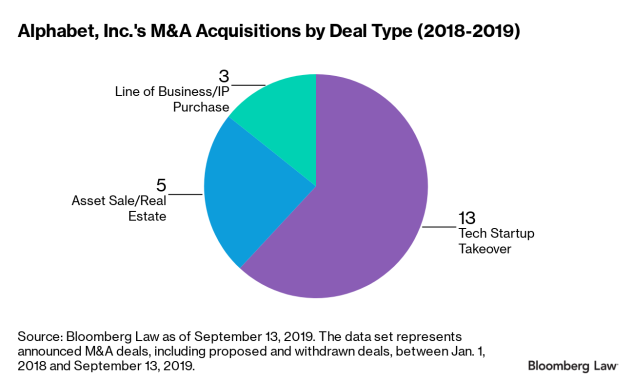 One of these cloud acquisitions, this summer’s $2.6 billion acquisition of analytics startup Looker Data Sciences, Inc., was the largest M&A deal announced by Google since its acquisition of Nest Labs, Inc. in 2014. While Google’s cloud push has been receiving a great deal of attention, cloud acquisitions represent less than half of Alphabet, Inc.’s recent tech startup takeovers. In 2018 and 2019, Alphabet, Inc. has also taken over startups in a number of emerging technologies: smart phone sound, the internet of things, education, and gifs, to name a few. In non-startup M&A, Google has acquired smartwatch technology from Fossil Group and Nokia’s airplane broadband business.

Alphabet, Inc. has also recently made significant M&A real estate acquisitions. Last year, the company purchased Chelsea Market in Manhattan for $2.4 billion and a 51.8 acre business park near its Mountain View, California headquarters for $1 billion. This summer, Google acquired several properties in Sunnyvale, California, where its cloud division is located, from Verizon Communications, Inc. for $1 billion. These California acquisitions, each the largest real estate deals in Silicon Valley in 2018 and 2019, were made amid a Silicon Valley real estate boom when office space is in high demand for tech giants.

Apple has also devoted significant resources to acquiring strategic lines of business and IP. Apple’s pending $1 billion acquisition of Intel’s smartphone modem business will expedite its plan to make vertical acquisitions and eventually “shed all third-party partners and bring modem production in-house,” reports Bloomberg, and comes following Apple’s recent settlement of a long standing dispute with Qualcomm, which previously supplied it with 5G cellular modems. According to Bloomberg, “[s]elling its own modems would follow the long-time Apple playbook, which is to design critical components internally.” Fitting in with the same strategy, last year Apple acquired a chip supplier business from Dialog Semiconductor Plc, one of its power management component suppliers, for $600 million.

Unlike Google, real estate acquisitions are not a part of Apple’s recent M&A strategy. 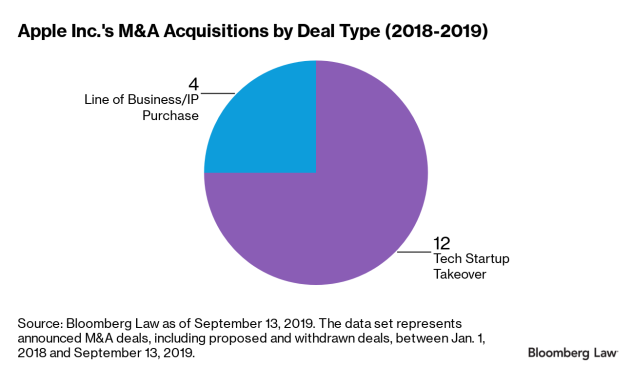 Google and Apple M&A Targets Mostly in U.S. and U.K. 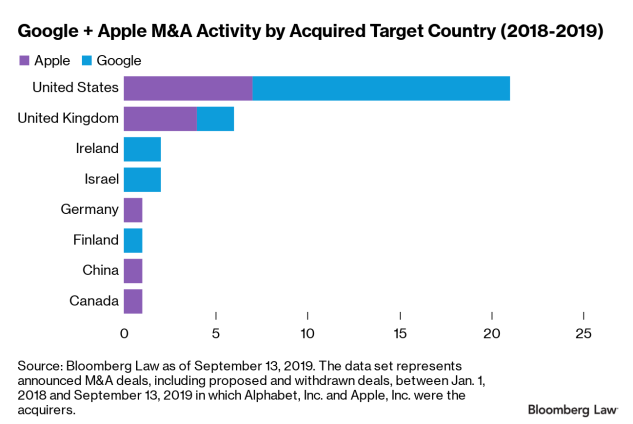