There’s no escaping the fact that the gender pay gap is alive and well within the legal profession. The American Bar Association recently passed two resolutions aiming to close this gap. The accompanying study showed that male partners’ compensation at Am Law 200 firms was 53% higher on average than women’s, while general counsels’ compensation was an average of 39% higher for men than for women.

Each year, the American Intellectual Property Law Association (AIPLA) sponsors a survey of their membership. This year, Bloomberg Law partnered with the Women in IP subcommittee to analyze the results of the member survey along gender lines. Among survey respondents, the proportion of men making $150,000 or more a year is consistently higher than the proportion of women making that amount. And while salaries have gone up for everyone over the past several years, men started out higher overall and remain so as of 2018, maintaining the gender pay gap. 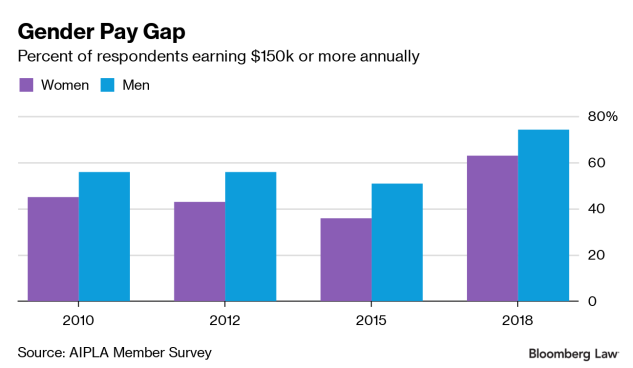 Salary equity isn’t a single yes or no question, though, and looking at practice-specific details can illuminate additional lines of inquiry.

Solo IP law practitioners tend to make only about half the salary of partners at law firms. While the gender pay gap between solo practitioners nearly evened out in 2016, it opened back up again in 2018. Looking at law firm partners, annual salaries continued to climb from 2004 to 2018, and 2018 featured one of the smallest gaps between men’s and women’s salaries. The gender pay gap is still, however, quite wide among corporate heads of IP, law firm associates, and general corporate attorneys. The only track where the gender pay gap is nearly equal in 2018 is among attorneys who list themselves as Of Counsel. These respondents—men and women—report making around $200,000 annually.

It’s Not All About the Money

While salary is one of the indicators observers look at when assessing equity in the workforce, there are many other factors at play in describing women’s experience in IP law. For a report with our full analysis on gender differences in IP law, please click here.

Before homing in on specific factors, though, keep in mind the following demographic breakdowns of the survey sample. Namely, the women in this particular sample tend to be younger than the responding men. Fifty-seven percent of the men surveyed are 50 years or older, whereas only 43% of women are in the same age range. Younger workers tend to be less tenured than older workers, and this relationship holds true in our sample as well—58% of men have been practicing IP law for 20 or more years, while only 40% of responding women have been in IP practice that long.

One frequently voiced assumption about the results of surveys like these is that differences in pay logically follow from men having advanced farther in their careers than women. While it is true that there are about 10% more men in the 60+ age category than women, the percentage of men and women surveyed in every other category is more similar. The large disparity in pay, however, is seen across all age categories over the past 15 years, and even seems to be growing among associates, which as a cohort tends to be much younger and just starting in their career. The only exception is Of Counsel positions.

Job Responsibilities and Book of Business

Women in IP law report higher amounts of time spent on administrative tasks than men. In addition to these administrative tasks, anecdotally we know that women tend to spend time on other non-billable activities such as mentoring junior attorneys and participating in diversity and inclusion initiatives, likely at a higher rate than men. While these efforts are highly important—and usually fulfilling—projects, they divert women from the most effective career path.

What about billable activities? Perhaps we see more equity in other work being done. Unfortunately, not. Women are much more likely than their male counterparts to report never serving as first chair in a litigation. More than half of women in IP law say they have never been a first chair, compared to only one-third of men. In addition, one out of five women in IP law report having no book of business—an important metric in the race for partnership.

The number of women reporting no book of business has dropped considerably over the past several years, as it hovered around 50% through 2015, but it is still double the amount of men reporting no book of business. Many times, women are seen as great networkers—able to quickly form relationships, but not great at closing the deal. The men close the deal, book the business, and jump ahead in their career. 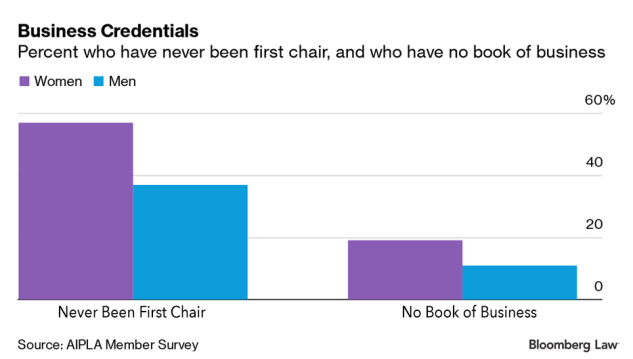 In the practice of IP law, women are not dissatisfied at work. Far from it, in fact. Nearly nine out of 10 women report that work allows an acceptable work/life balance, and three-quarters say they are either satisfied or even love their job. Less than one-third have either considered switching to another area of law or leaving law altogether. These responses paint a picture of IP law as an exciting and satisfying career, one that fulfills women and allows them to grow and develop professionally.

Beyond the broader practice area, women are also generally satisfied with their employers, as evidenced by 60% who report job satisfaction as a reason to accept or remain in their current position. In fact, 77% of women say they are satisfied or love their job.

When women do look around for other employment opportunities, the top-cited reason is lack of job advancement potential. This concern is mentioned by about one-quarter of survey respondents, specifically regarding reasons they might potentially leave their current job. However, as a corollary to the lack of advancement potential, more than half of female survey respondents report either seeing or experiencing barriers to career advancement in the IP law profession, compared to just more than one-third of men.

Gazing Into Our Crystal Ball

According to the responses from this cohort, women lag behind men in their IP law careers. But we have evidence that it may not always be this way. As of the 2018 survey, 60% of men and 48% of women say that they are already a Partner or Corporate Head of IP Department. While this is a gap, there are more women than men who say they are on a partnership/management track (31% vs. 21%).

An even more compelling story comes out in looking at the percentage of women who say they are not on a partnership/management track. That number was 33% in 2015 and has dropped to 21% in 2018. Going a layer deeper, when asked why they are not on a partner track, the number of women indicating that they were not given the option has dropped—roughly half of women were not given a partner track option since 2010, down to 43% in 2018. So, while the numbers at the partner level are not yet equal, there appears to be a trend of more women being given the option, and they may eventually take that option in years to come.

We know that in many firms, business credit and allocation of credit is a large part of the culture. Women, anecdotally, describe firm cultures where men share credit and business development opportunities with other men while leaving women out. Other instances of inequitable treatment include men using women’s names in bids to showcase to companies seeking legal work that the firm takes diversity and inclusion seriously but failing to invite women to the pitch or share credit with them. The women’s names used in those bids may not even wind up doing the work.

Women say they love what they do, but the pay-gap and book-of-business needles won’t move without changing how credits and promotions are awarded.

Molly Huie
Team Lead, Data Analysis and Surveys
The State of Women in IP Law
ANALYSIS: A Message of Female Empowerment at the 2018 Corporate Legal Operations Institute
© 2022 The Bureau of National Affairs, Inc.
All Rights Reserved