A buoy marks the location of where a commercial fishing boat hung its nets.
Photographer: James MacDonald/Bloomberg

As the Department of Commerce announced that the U.S. gross domestic product grew at an impressive (yet mark-missing) 6.5% in the second quarter, the legal field was kicking off the third quarter with similarly good (but not great) employment growth figures, according to the Bureau of Labor Statistics’ monthly employment report. 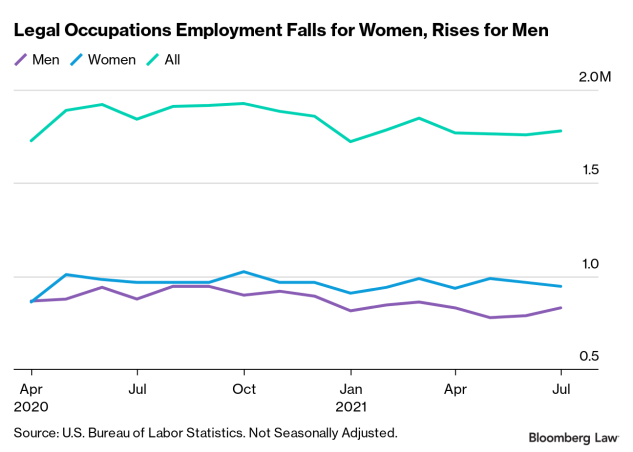 The continued fall in female employment may be due to more employers calling employees back to the office. From May to July, the percentage of legal professionals that teleworked dropped from 40.9% to 36.8%. Because many home and family responsibilities often fall on women, some may have left the ranks of the employed involuntarily or out of necessity. If they were forced to return to the office before they were ready or before they had necessary home and family support systems in place, they may have been left losing their jobs instead.

Overall, the unemployment rate among legal occupations was down, but only men experienced a drop in unemployment—from 2.7% to 1.3%—from June to July while women experienced an increase from 3.3% to 3.4% in the same period. The climb in the female unemployment rate shows that while fewer women are working in legal occupations, more have begun looking for work. This reinforces the notion that women are not merely leaving their legal jobs to pursue other career opportunities. 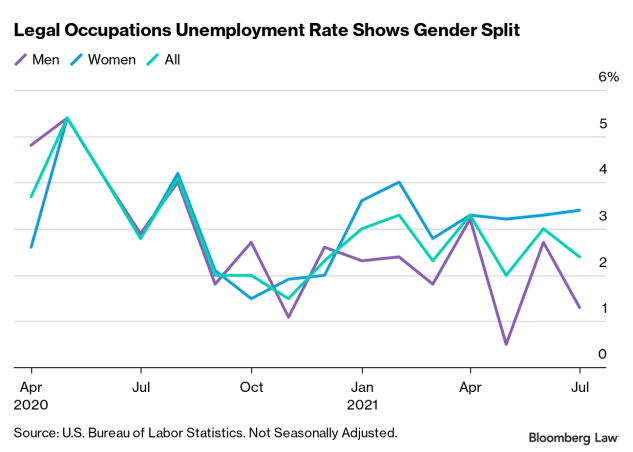 As we move further into the ongoing Covid-19 delta variant surge, both GDP and legal occupations job growth may be impacted, potentially changing economic realities. We are following the situation and will continue to provide updates and analysis.

Bloomberg Law subscribers can find related content on our In Focus: Legal Operations and In Focus: Lawyer Development pages.