The Federal Trade Commission has not blocked a single pharmaceutical mega deal, valued at $10 billion or greater, announced in the past decade. In our review of Bloomberg M&A data on completed and terminated deals, and publicly available antitrust review information, we found that the FTC imposed conditions and divestitures on fewer than one-third of these deals, all of which subsequently closed. The current FTC is rethinking that outcome.

Acting FTC Chairwoman Rebecca Kelly Slaughter announced on March 16 that the FTC will work with several other competition regulators, from U.S. and international agencies, to examine and update their approach to pharmaceuticals mergers and how they evaluate the likely market impacts of those deals.

This coordinated reevaluation of the real-world impacts of pharmaceutical mergers likely will lengthen review of these deals. It’s too soon to tell whether regulators will actually implement changes in how they review pharma deals, because changing merger review rules isn’t a simple matter. However, deals should expect an even more rigorous review even under existing standards, and the working group’s review of the impacts of past deals may inform new approaches and tests for dissecting pharma mergers. Given the international scope of this working group, multinational deals in particular might face enough delay to be derailed.

A Decade of Mega Deals

The past 10 years have seen considerable consolidation in pharmaceuticals markets. Since Jan. 1, 2010, definitive agreements were entered into in 38 deals valued at $10 billion or greater involving at least one U.S. party and one party in the pharmaceutical industry. Of these 38 deals, 32 made it to completion and only six deals were terminated—though, based on our review of publicly available information, none of the terminated deals were scrapped due to antitrust concerns. Eighteen of the 38 deals made it to completion without any conditions having been imposed by the FTC, and five of the 38 deals made it to completion after Hart-Scott-Rodino early termination was granted (meaning that the FTC permitted the regulatory waiting period to end early). In sum, 23 of the 32 deals that made it to completion did so completely unhindered by the FTC. 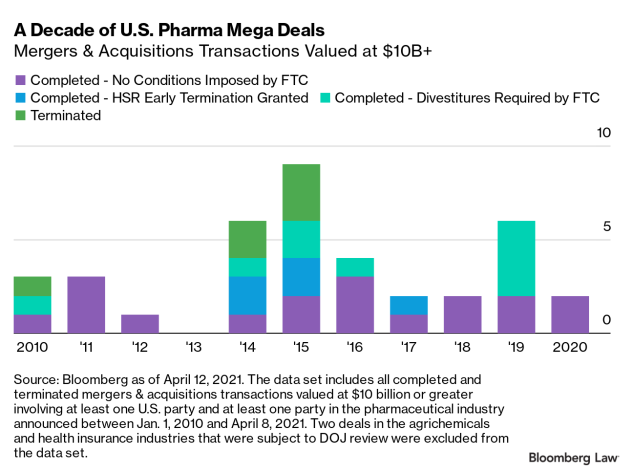 Beyond the mega market, an impressive number of small-, mid-, and large-sized deals made it to completion over the past 10 years. In all, Bloomberg data show that more than 6,000 non-mega M&A transactions, valued at $809.9 billion in the pharmaceutical industry, were announced and closed from 2010 through 2020.

Are Pharma Markets Too Narrow?

Typically, the FTC reviews pharmaceutical mergers and acquisitions for overlap between the merging parties in discrete, narrow markets. If both parties produce competing drugs for a particular application, or if one of the parties is working on a competing drug that might enter a market occupied by the other party, the FTC will require divestiture of one competing product. Sometimes the agency might require divestiture of an entire product type or a research segment to ensure that the divested assets can truly continue to compete against the merged entity in the affected market.

For example, in the $63 billion merger of Allergan PLC and AbbVie Inc., completed in May 2020, the FTC required Allergan to divest three drugs: two for the treatment of pancreatic insufficiency and one that treats severe Crohn’s disease. To arrive at those narrow markets, however, the FTC conducted a 10-month investigation into the deal and vetted potential divestiture buyers for the drugs in question. Once those markets were addressed, the deal closed.

A look at the largest deals of the past decade shows how the FTC’s narrow market definitions to date have played out. Of the 32 pharma mega deals completed between 2010 and 2020, the FTC imposed conditions in only nine of them. These conditions included, in some cases, very large divestitures: in 2019, when Bristol Myers Squibb acquired Celgene, the required sale of Celgene’s Otezla business to Amgen Inc. was large enough to constitute a mega deal on its own at $13.4 million. But in no instance did the FTC identify unredeemable impediments to the larger deal.

The working group on pharmaceutical mergers will include the Canadian Competition Bureau, the European Commission Directorate General for Competition, the U.K.’s Competition and Markets Authority, the U.S. Department of Justice Antitrust Division, and Offices of State Attorneys General.

Specifically, the FTC said that the group will pool its expertise “to identify concrete and actionable steps to review and update the analysis of pharmaceutical mergers.” FTC Chairwoman Slaughter said that the agency and its peers must “rethink our approach toward pharmaceutical merger review” in light of not only the high volume of mergers, but also “skyrocketing drug prices and ongoing concerns about anticompetitive conduct in the industry.”

In Slaughter’s dissent in the Allergan-AbbVie merger, she expressed concerns about how pharmaceutical mergers benefit the public, rather than just the companies. She also questioned whether the market is already so concentrated that further mergers would just serve to enable broad anticompetitive conduct, like the widespread price fixing alleged in generic drug markets. Those underlying concerns will likely animate her approach to the working group.

Be Prepared to Wait

At this stage, it’s unclear what the working group may determine, or how the FTC’s approach to pharma mergers might shift. What is clear, however, is that pharmaceutical companies looking to merge should be prepared to meet an engaged regulator interested in reviewing all aspects of the two businesses that propose to merge. That likely means that mergers will wait longer to close while they navigate the merger review process.

Multinational deals, which may need to navigate multiple merger clearance regimes that are re-evaluating their approach to pharma deals, face a particular threat of delay. Merging parties should also expect, however, that the members of the working group, who will have formed working relationships with their counterparts abroad, will work cooperatively on any cross-border deals to improve efficiency and share information as possible.

With assistance from Nageen Qasim and Annemarie Lyons, Bloomberg L.P.