A basketball falls through a hoop.
Ian Hitchcock/Getty Images

It has been a busy inaugural year for Subchapter V Chapter 11 bankruptcies. With Super Bowl LV now behind us, March Madness just over the horizon, and my head constantly whirring with scores and stats, I thought this would be the appropriate moment to compile some of Subchapter V’s key statistics to see what kind of year it had.

Since the first case was filed in the Middle District of Tennessee on Feb. 19, 2020, a total of 1,643 bankruptcies were filed pursuant to Subchapter V or converted to a case under Subchapter V, but that number alone does not tell the whole story.

Subchapter V made a strong showing in its first 90 days in terms of the number of filings, and it continued to gain steam as the year progressed and the pandemic settled in. For example, in the period spanning Aug. 19 through Nov. 18, Subchapter V filings peaked at 506 filings, up almost 20% from the previous 90-day period. That is a significant leap, and most likely the inevitable result of more than five months of unpredictable pandemic-related closings and re-openings combined with expanded Subchapter V eligibility. It is worth noting, however, that during the same period, Chapter 11 filings overall increased by only 14.5%.

All in all, Subchapter V had an impressive first year, accounting for just under 23% of total Chapter 11 filings. It is an example of legislative time well-spent. 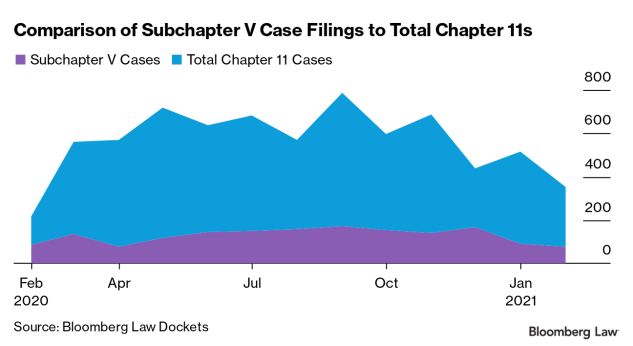 Where Is the Action?

The Middle District of Florida takes the prize for the most Subchapter V cases filed during its first year with more than 140 cases. Districts within Florida, California, and Texas rounded out the top five.

Surprisingly, the top three jurisdictions for large Chapter 11s, while still in the top 10 for Subchapter V filings, each registered only about a third as many cases as were filed in Florida’s middle district. And we can’t talk about the top districts without mentioning the least active ones. The Eastern District of Oklahoma found itself bringing up the rear with just one case, while Rhode Island was completely locked out with zero. 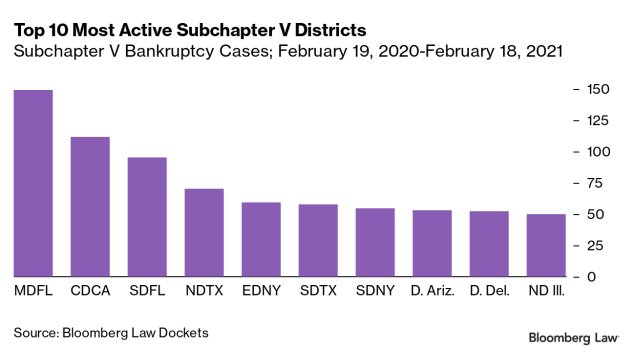 The Referees and Rules of the Game

With every new law comes litigation, and bankruptcy is no different. Although bankruptcy is a complex and hotly contested area of law, that is not often reflected in the case law. Bankruptcy, by definition, is an area of law that is not flush with the cash often needed to sustain lengthy litigation. As a result, many conflicts are settled out of court. Of those formally ruled on by a judge, few result in published opinions. However, U.S. Bankruptcy Judges Eduardo V. Rodriguez of the Southern District of Texas (4 opinions), Meredith S. Grabill of the Eastern District of Louisiana (4 opinions), and Robert H. Jacobvitz of the District of New Mexico (3 opinions) took the lead, publishing the most opinions analyzing Subchapter V in this first year.

The SBRA introduced 15 new subsections to the bankruptcy code, providing plenty of fodder for litigation. It should come as no surprise that issues around 11 U.S.C. § 1191 governing plan confirmation raked in the most opinions. Confirmation objections regarding the duration of plan payments and the precise meaning of “fair and equitable” in the context of Subchapter V cases were recurring issues. Bankruptcy Code § 1181, with its distinctions between conventional Chapter 11 and Subchapter V, took second place. 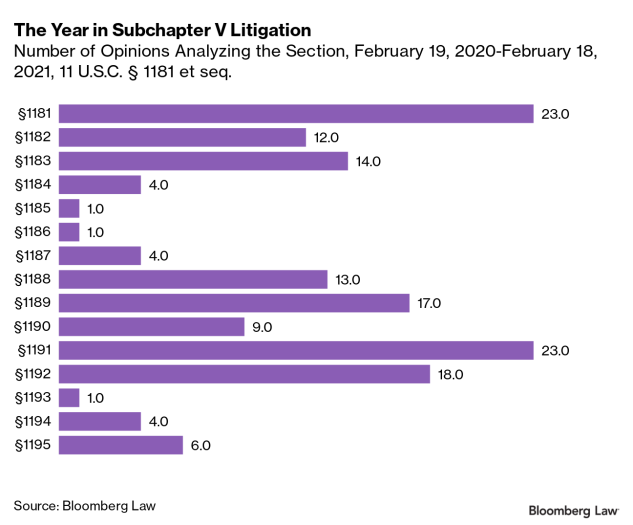 Overall, I would rate Subchapter V’s first year a success. Although nobody could have predicted in 2019 just how 2020 would unfold, it proved to be uncannily perfect timing. The SBRA and Subchapter V were quite possibly the best remedy for the worst time that many small businesses would have to endure.