Since the Covid-19 crisis began, the Department of Justice’s antitrust division has issued more business review letters than it had previously issued during the entire Trump administration.

The letters are mostly part of the DOJ’s expedited guidance program for the Covid-19 crisis, implemented with the Federal Trade Commission, that is intended to provide fast and flexible review of collaborations and joint ventures to address market failures caused by the crisis.

Based on the dearth of published review letters, the process apparently had fallen out of favor. But the market disruptions caused by the pandemic, and the DOJ’s pledge to issue responses within one week when businesses asked for guidance about whether specific conduct likely faces antitrust enforcement, have brought about a small resurgence.

No year has seen review letters in the double digits since 2000, while the 1990s frequently saw 20 or more per year. It’s difficult to say what has caused the change: whether requests for business review letters have declined, whether businesses are withdrawing their requests before DOJ issues a (negative) public response, or whether the change reflects some shift in policy or resources at the DOJ. 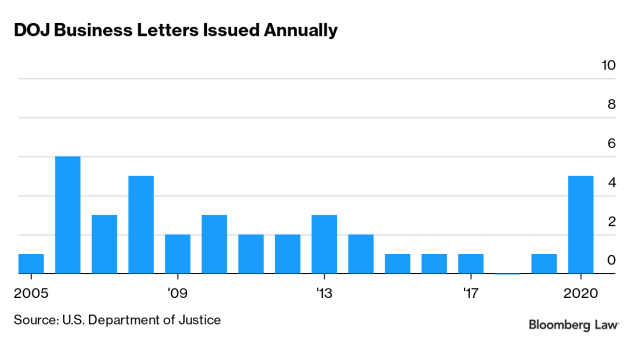 Of the letters issued in 2020, the three issued under the emergency expedited procedure took five to seven days to issue from the date of request.

In contrast, the normal procedure under 28 C.F.R. § 50.6 can take months. The DOJ issued two business review letters during 2020 under the pre-pandemic procedures: one to the American Optometric Association took 105 days to complete, and the other, to the Association of Independent Commercial Producers, took 146 days.

Those durations represent typical response times. Responses under normal, pre-pandemic procedures dating back to 2015 took between 79 and 346 days. DOJ often requests additional information from the requesting parties, and it takes time to conduct the full research necessary to predict with confidence whether a specific course of business could have anticompetitive outcomes.

The Role of Business Review Letters

The business review letter process allows organizations to request that DOJ review specific proposed joint venture or other conduct under the antitrust laws. The DOJ’s answer explains how the agency “may respond” to the proposed conduct and its reasoning. DOJ will respond that it “does not presently intend to bring an enforcement action” if the organization proceeds as planned, or won’t commit to stating its enforcement intentions, or will sue the parties if the conduct occurs as described.

If all goes well, the requesting business or organization may take comfort that its conduct won’t draw an enforcement action and, because the letters are published, other businesses contemplating similar conduct may glean information about how their planned actions may be viewed by the agency.

But there are a number of factors that reduce the usefulness of business review letters to the general public. For one thing, although neutral or negative responses, like one in 2013, can be helpful because they describe a line the DOJ isn’t comfortable crossing and why, such responses are rarely published. That is because the requesting party can withdraw the letter if the DOJ indicates that the proposed conduct won’t pass muster. That means few companies complete the process unless a positive outcome is expected.

And positive letters are very fact specific and therefore are harder to generalize to facts that differ from the letter itself. Because the few letters published are overwhelmingly positive, they often don’t result in a lot of guidance for businesses at large.

Furthermore, the policies that underpin a given letter can change radically as experience with a type of conduct, legal and political considerations, or the economic underpinnings of specific doctrines shift. As an example, a letter issued to the Institute of Electrical and Electronics Engineers Inc. (IEEE) in 2015 may not comport with current DOJ policy on its topic—fair, reasonable, and non-discriminatory licensing of standard essential patents. Reading the IEEE business letter for enforcement cues today without a strong understanding of current DOJ policy likely would be a mistake.

And since so few letters have been published in the past decade, their cumulative value as tea leaves on DOJ’s enforcement policy has diminished.

It’s possible that the business review process simply isn’t necessary anymore. If DOJ’s enforcement priorities are transparent, businesses might not need a formal letter to gauge whether conduct will raise red flags. Informal channels to the DOJ staff may have supplanted the more onerous letter system. Or businesses might believe they can justify conduct if enforcers come knocking, and aren’t willing to tip off the agencies beforehand and invite extra scrutiny.

Whatever is behind the fall off in business review letters issued, the extremely unusual market circumstances brought by the Covid-19 crisis evidently have changed the calculus.

The DOJ’s latest business review letter makes it easy to understand why crisis conditions have brought more requests for enforcement clarity. DOJ told the National Pork Producers Council (NPPC) that its efforts to coordinate supply of hogs among producers won’t draw an enforcement action. DOJ’s response on May 15 came just a week after receiving the NPPC’s request.

Like a number of food industries, pork production is having serious market problems. Meat packers are shut down, and hogs are rapidly growing too large for the specific systems the packing plants operate, according to the NPPC’s request. Producers face mass “culling” of animals, which is subject to a patchwork of animal protection and other laws, and massive disposal problems that likewise could run afoul of environmental and other statutes. NPPC wants to give producers guidance or coordinate with the U.S. Department of Agriculture in managing the crisis, the request says.

But there are a number of antitrust lawsuits pending right now, or settled in recent years, that accuse agricultural producers or distributors of colluding through an industry association to cull livestock or otherwise restrict supply and drive up prices.

DOJ, like it did in approving coordination in medical supplies, said that industries working with government supervision to manage supply and distribution are usually engaged in procompetitive activity. DOJ also blessed NPPC sending guidelines for euthanizing animals and their disposal to NPCC’s members, even without USDA oversight.