That’s not terribly surprising. Starting in March, most federal courts have been under modified procedures that make prosecuting a lawsuit (particularly one in which the right to a jury trial is important) more uncertain. Furthermore, many companies that might file an antitrust lawsuit are struggling to regain their own footing as markets fundamentally shift. It might not be the natural time to file “bet the firm” litigation in federal court. 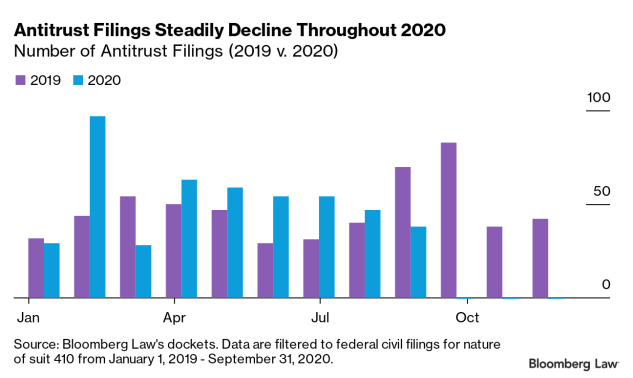 And yet the number of filings for the year continues to be pretty robust when compared to last year. By the end of the third quarter this year, 468 complaints had been filed in federal court under the “antitrust” nature of suit code (410), according to an analysis of Bloomberg Law dockets. During the same period in 2019, plaintiffs had filed 397 antitrust suits. Last year, the fourth quarter was the strongest for antitrust complaints, led by 84 new complaints filed in October. This year, no month has come close to the 97 complaints plaintiffs filed in February.

Overall, it’s hard to say that this year’s complaint filings are looking up. Instead, it looks like they are sliding downward throughout the year. Of course, if the Department of Justice files a complaint against Google before year end, as expected, follow-on civil litigation could reverse that trend swiftly. Only time will tell.

Jacquelyn Palmer
Research and Data Analyst
ANALYSIS: Antitrust Cases Are on an Upswing Over 2019
ANALYSIS: Pandemic Delays Antitrust Review of $130B in M&A Deals
© 2022 The Bureau of National Affairs, Inc.
All Rights Reserved