European IPOs posted poor results by nearly any measure during the first half of the year, contrasting sharply with a U.S. IPO market enjoying stellar growth. Volkswagen’s cancellation of its Traton SE trucks division may be consistent with—and a contributor to—this trend.

IPO Market in Europe Falters Amidst a Slowing European Economy

In the first half of 2019, issuers priced only 71 IPOs, raising $15.9 billion. These results are down substantially from the first half of 2018, when 168 IPOs priced, raising $31.5 billion. However, second quarter IPO activity represents a relatively healthy rebound from the borderline comatose IPO market Europe experienced during the first quarter of 2019, the worst quarter since the depths of the financial crisis in 2009.

The first half numbers seem even more tepid considering that 2018 IPOs in Europe declined significantly in count and total money raised compared to 2017. Meanwhile, the U.S. IPO market was on fire in the second quarter of 2019. US IPO activity for the first half of 2019 was roughly equivalent to the same period in 2018 despite a partial U.S. government shutdown either delaying the processing of offerings by the SEC or causing companies to delay their filings.

The three largest IPOs pricing on European exchanges during the first half of 2019 were:

Brexit concerns have weighed on London listings. Network International is the first large company to list in London so far this year. 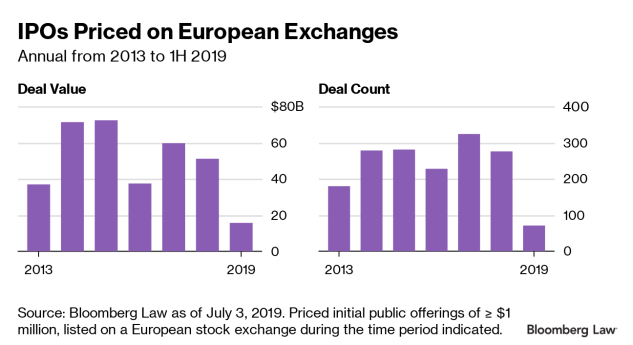 In the first half of 2019, the consumer (non-cyclical) sector was the most active with 18 IPOs. While the financial sector has usually led in recent years, it came in behind consumer (non-cyclical), totaling 12 initial public offerings. Despite leading the other sectors, these totals represent noteworthy declines compared with results since 2013.

The top IPOs by dollar value in each of the three top sectors in the first half of 2019 were: 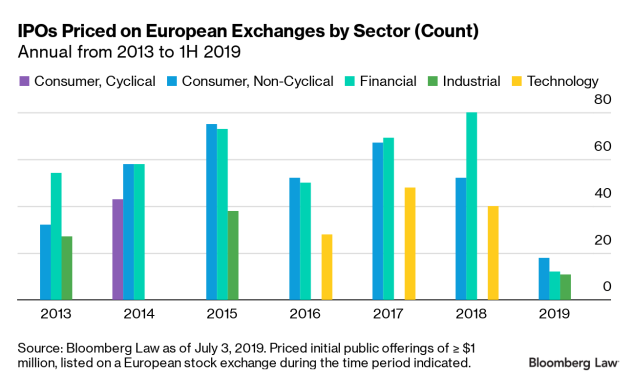 In the first half of 2019, the financial sector continued to raise more capital in European IPOs than any other sector—and by a large margin. The value of Nexi SpA’s IPO topped all other IPOs in the first six months.

The communications sector outperformed recent history, finishing in the top three sectors for total value of IPOs for the first time since at least 2013. Trainline PLC, the second biggest U.K. listing in 2019, led this sector. Industrials dropped to the third spot from second spot in 2018, raising a total of $2.25 billion.

The top IPOs by dollar value in each of the three top sectors in the first half of 2019 were: 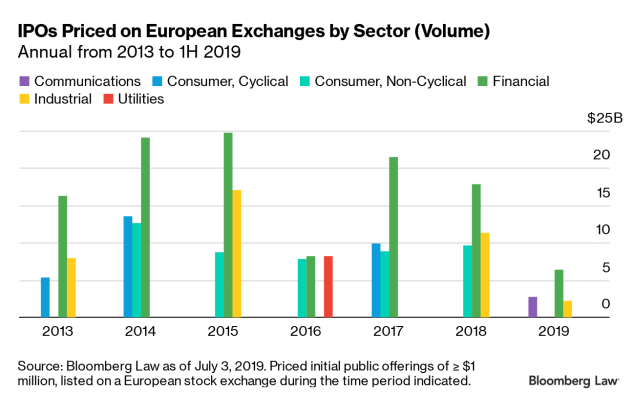 In the first half of 2019, smaller IPOs in the $1 - $100 million range reversed a two-year trend, when IPOs in that band shrank relative to other tranches. This year, the number of smaller IPOs increased from 65% to 69% of all public offerings. By contrast, this trend away from small IPOs has continued on U.S. exchanges. 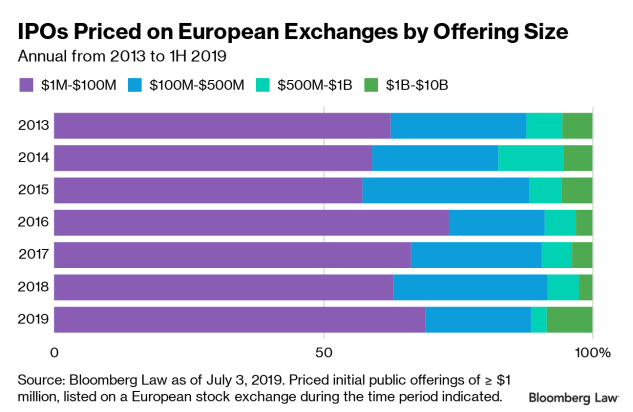 SPACs Stumble and Tumble Down to Just One in 1H 2019

Special Purpose Acquisition Companies—the blank check company that pools funds to finance M&A transactions—have continued to dazzle U.S. investors. By contrast, Europe priced only one SPAC in the first half of 2019: Gear 1 Spa. It raised the very modest total of $34.1 million. Those figures compare to 10 SPAC IPOs priced in Europe in 2018, raising $1.45 billion.

SPAC IPOs had grown tremendously in 2017 in number and value. The number of these deals shot up by 15, from four to 19 SPAC offerings, with deal value increasing by about $3.5 billion from $456 million in 2016. The SPAC IPO deal count declined in 2018 by almost half while shedding total deal value by nearly $2 billion. 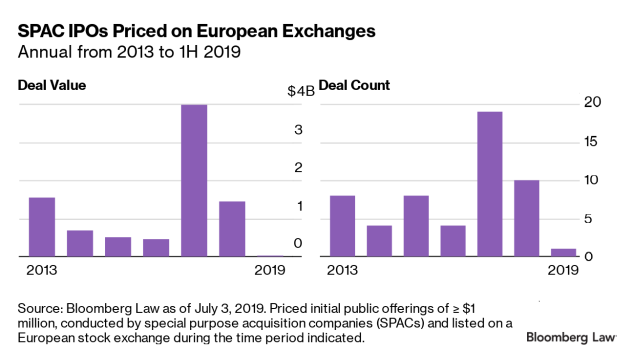 The struggling market for IPOs on Europe’s exchanges faces increasing headwinds. After many years of synchronous expansion, slowing economic growth in Europe (albeit with some tentative, encouraging economic numbers in May), China and the United States threatens to bring about a worldwide recession. Collateral damage from the US and China’s still-escalating trade war is spreading in Asia and, to a lesser extent, worldwide.

Europe’s IPO activity has been waning, and the trend looks to continue with bad news begetting more bad news. In March, Volkwagen AG canceled a stock sale of its Traton SE trucks division, blaming market conditions and an auto industry slowdown. This IPO would have been Europe’s largest of the year and its removal is “spoil[ing] the mood for other European IPOs,” according to Guillermo Hernandez Sampere, head of trading at German asset manager MPPM EK, as reported by Bloomberg News.

Recent IPOs have garnered decidedly mixed results for investors, in contrast to the U.S., where the strong IPO market has broadly produced healthy early returns notwithstanding Uber’s dud of an IPO in May. The European market for IPOs looks tired. It may lack the strength to overcome setbacks, such as the pulled VW IPO, that the U.S. market would likely be able to take in stride, as it did with the recent troubled IPOs of Lyft and Uber.

There are many reasons for investors to worry about the remainder of the year (and beyond), including moribund M&A activity on the continent. Still, investors can take heart that at least U.K.-U.S. M&A activity is thriving, private equity firms are moving in to pick up cheap stocks on Europe’s exchanges, pushing values higher, the European Central Bank is studying stimulus options, and Germany’s IPO pipeline has been described as “robust.”