A logo above the TotalEnergies SE electric vehicle fuelling station near the company's headquarter office in the La Defense business district in Paris, France, on Monday, July 12, 2021.
Photographer: Nathan Laine/Bloomberg

Public investor activists have waged very few campaigns against energy-sector corporations so far this year. But there are indications that stakeholders are looking beyond traditional objectives and pushing for change on issues such as the energy industry’s environmental and social responsibilities and its involvement with global conflicts like the war in Ukraine.

Only six investor activism campaigns in the energy sector have been publicly announced in 2022. That is well off the pace of recent years: Energy companies were faced with 48 campaigns in 2019, 40 in 2020, and 39 in 2021.

In terms of what activists are asking for, 2022 so far has been similarly quiet. The first quarter included only eight investor activist objectives within the energy sector, falling within four different categorizations: four board actions, one cost change and realization action, one corporate reorganization action, and two other. 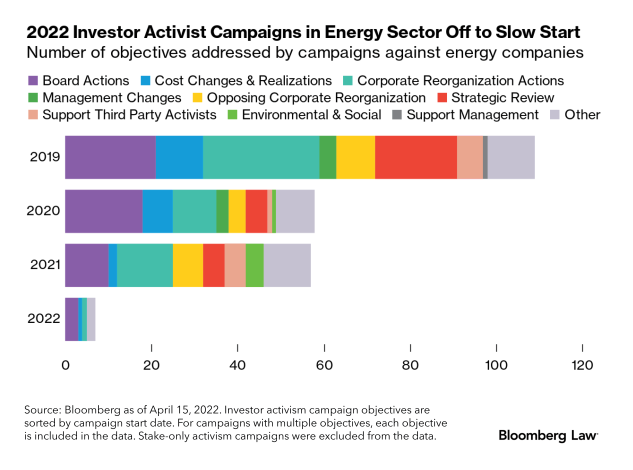 Despite the low level of recent activity, we still should expect investor activists to go beyond traditional corporate campaign types that target management and the board as the year progresses.

In the past two years, environmentally and socially focused activist campaigns have targeted the energy sector’s ESG-related policies, and that trend could continue into 2022.

A look at recent patterns in energy-sector shareholder proposals suggests that greater stakeholder scrutiny in this area may be coming in the next quarter, ahead of annual shareholder meetings. In each of the past four years, the number of proposals filed by energy company shareholders in the “environmental and social” category has increased from Q1 to Q2. 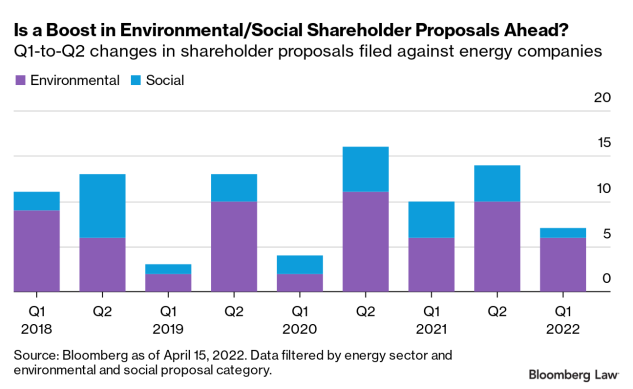 A Shift in Stakeholder Objectives

Beyond environmental and social issues, where we can expect energy-sector stakeholders to make the most high-profile shift is even further outside of traditional areas, and into the realm of global affairs.

Activist Clearway Capital‘s campaign, launched on March 11, aims for TotalEnergies SE to exit Russian operations. The Clearway Capital campaign is the first public campaign to specifically target a company’s country-specific operations in response to an international conflict since Bloomberg started tracking all public investor activism in 2017. While TotalEnergies announced that it will not divest its Russian assets, Clearway indicated that it is poised to submit a shareholder proposal if Total does not meet its demands ahead of the company’s May 25 annual general meeting.

Shareholder proposals may be reflecting a similar shift into global affairs. Chevron Corp. received a shareholder proposal April 7th to report on business with conflict-complicit governments, based on the company’s involvement in Myanmar. Chevron’s Board urged shareholders to vote against the proposal, which remains pending. The proposal, for Chevron to create and enforce a general conflict policy in response to operations in a particular country, may spur shareholders to go beyond the isolated requests of investor activists and seek lasting conflict policies for energy companies.

As energy sector stakeholders prepare for annual meetings, we should expect them to urge new ways for companies to shape their environmental and social policies and limit operations involving armed conflict.

Bloomberg Law subscribers can find related content on our ESG Practice page, as well as our Practical Guidance: Shareholders page.