The Justice Department and Federal Trade Commission have announced that all mergers and acquisitions subject to regulation under the Hart-Scott-Rodino Act will have to sit out the statute’s full 30-day waiting period before combining operations.

This was a highly unusual move for the antitrust regulators. The change stands to impact roughly half of all deals that file notice with antitrust regulators under the HSR Act, and potentially signals a fundamental shift in the review process more broadly. The agencies didn’t signal when they will restart the discretionary program that allows some deals to close quickly, but when they do, there are signs that fewer deals may qualify.

The agencies indefinitely suspended their “early termination” program on Feb. 4, which permitted merging parties to ask for a faster determination of whether their deal poses a risk to competition. Deals determined to pose no risk to competition are allowed to end the HSR Act’s waiting period early, often weeks before the 30-day notice period for pending deals elapses. 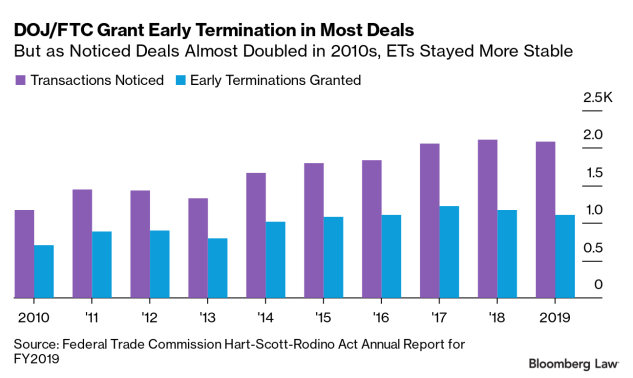 Accordingly, if history is any guide, at least half of all deals noticed under the HSR Act stand to wait longer without access to the early termination program. But more importantly, it appears that this suspension (unlike a short one early on in the COVID-19 crisis to implement an online process for HSR filings and review) stems from a concern about the early termination process itself, and perhaps reflects the agencies’ approach to merger review more broadly. That could signal a more fundamental rethink about merger review, beyond just the temporary interruption of a discretionary program to speed along mergers that pose no antitrust concerns.

Why Is This Transition Different?

Commissioners Noah Joshua Phillips and Christine S. Wilson contend that, while the move is about concern that a deal might slip by regulators “during a period of political transition,” that hasn’t been a problem during past transitions and shouldn’t present a problem now. Indeed, they point out that the ET program has only been halted in the past during government shutdowns (when non-essential government work is prohibited) and for the few weeks in March 2020 caused by Covid-19 preventative measures.

One can only guess what’s different now—but looking at the state of merger regulation more broadly, the answer is “a lot.”

The FTC is in court suing to undo mergers that it permitted Facebook Inc. to complete with no restrictions in 2012. A coalition of states are suing to undo a host of mergers that Google LLC allegedly used to dominate the market for online advertising technology. (Central to the market power Google allegedly acquired was its purchase of Doubleclick in 2008, which the FTC had determined posed no risk to competition.) The DOJ is also suing Google’s parent, Alphabet Inc., for monopolization in the internet search market, and the DOJ has suffered a couple of painful setbacks in lawsuits to block mergers that it did determine had endangered competition.

In short, at the moment, there is a lot of concern in the enforcement community about whether regulators adequately predicted merger impacts in rapidly moving markets and can stop anticompetitive mergers in court after the fact if markets take an anticompetitive turn.

Congress too is concerned that merger control has become inadequate to protect markets and consumers. On the same day that the DOJ and FTC suspended early terminations, Senator Amy Klobuchar (D-MN) introduced sweeping legislation that, among other things, would substantially change merger review. The bill would “restore the original intent of Section 7 of the Clayton Act, which was designed to stop anticompetitive mergers in order to address competitive problems in their ‘incipiency’ before they ripened and caused harm.” As Klobuchar described the bill, it amends the Clayton Act to forbid mergers that “create an appreciable risk of materially lessening competition,” where “materially” is defined as “more than a de minimus amount.” In contrast, the current standard forbids mergers that “substantially lessen competition.”

When this pause in the early termination program ends, the program that returns might not be the same.

As Bloomberg News has reported, early indications are that President Biden’s antitrust regulators may be tougher on mergers. The current acting Chair of the FTC, Rebecca Kelly Slaughter, has also been vocal about her concerns that current merger review practices are too sanguine about the anticompetitive potential of vertical deals. Changing the assumptions that the agencies make about vertical deals will impact whether those deals can garner early termination.

For now, nothing is certain—except that merging parties need to be ready to delay closing for the full 30-day waiting period after filing an HSR notice. But given the broad policy discussion around tightening merger review, merging parties should be on the lookout for more changes and be prepared to defend the benefits of mergers that might have seemed to pose a low regulatory risk in the past.