Earlier this year, I plumbed Bloomberg Law’s labor databases to compare unions’ strength in the 27 U.S. states that have adopted right-to-work laws and the 23 states that haven’t. I found that unions generally performed worse in right-to-work states when it came to membership, organizing, and picketing power, but better in terms of earnings.

In this new analysis, I’m asking the obvious follow-up question: How much of this disparity can actually be attributed to the presence of such laws, which seek to curb labor by making it unlawful to require nonunion workers to join unions or pay union dues? Or, to put it more plainly: Do right-to-work laws actually bring about certain changes in a state’s union situation?

To answer this question, I focused on six Midwestern states: Illinois, Indiana, Michigan, Minnesota, Ohio, and Wisconsin. What makes these states a great test group isn’t just their close proximity and comparable business dynamics. It’s the fact that three of them—Indiana, Michigan, and Wisconsin—have adopted right-to-work laws in the past decade, while the other three have not. By comparing these two groups, I hope to find a clearer illustration of right-to-work’s impact.

For example, here’s a quick look at how each state has fared in terms of union coverage—that is, the number of employees who are covered under union collective bargaining agreements—from 2006 to 2018: 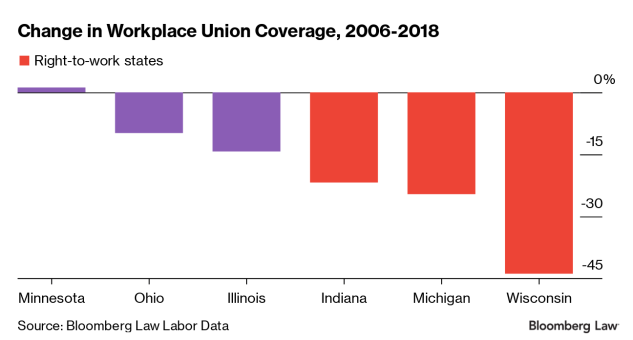 All three of the right-to-work states lost more than 20% of their union-covered worker population, while none of three non-right-to-work states did. Minnesota even managed to eke out a net gain over time. (I chose 2006 as a starting point instead of 2008 to account for aberrations caused by the recession.)

This is a good start. But beyond simple state-by-state comparisons, this kind of drill-down can also help to identify time-based, “before and after”-type changes. How did unions fare in the years following their state’s decision to switch, compared to the years leading up to it? Did the switch change labor’s momentum or trajectory in a clearly identifiable way—a change that does not show up in the results for the other three states?

Let’s start by looking at how each right-to-work state has changed by comparing yearly averages from its “before” period with its “after” period. 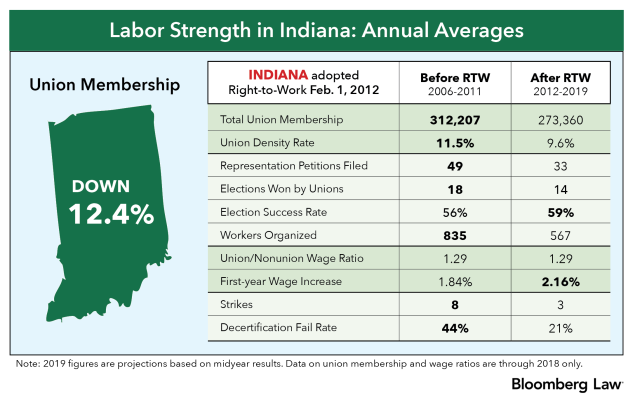 Indiana, which in 2012 became the first U.S. state in over 10 years to adopt a right-to-work law, has seen definitive drop-offs in union activity since it made the switch. In the seven years that make up the state’s “after” period, 2012 through 2018, the state’s labor force averaged 273,360 union members. That’s down 12.4 percent from the yearly average for its “before” period, covering 2006-2011.

Indiana’s unions have experienced lower yearly averages in most other metrics as well. For example, unions organized an average 835 workers per year through the NLRB election process in the years leading up to the switch. But in the 2012-2019 years, the number of workers organized has fallen by almost one-third, to 567 per year. (All 2019 figures are projected, based on midyear results.) 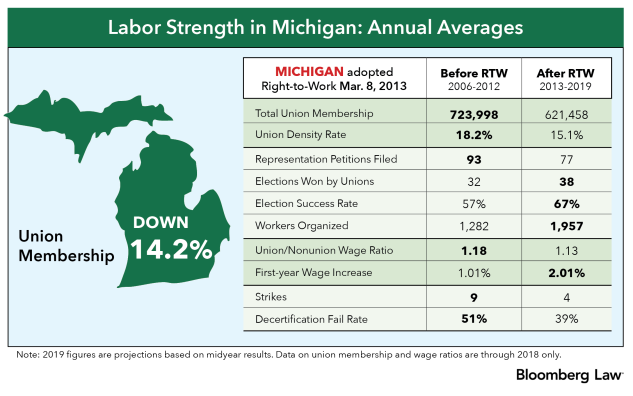 Michigan is the country’s most industrialized and unionized right-to-work state, and labor’s mild progress in the wake of its 2013 adoption of right-to-work has confirmed its outlier status.

As with the other states, union membership in Michigan is down: The average yearly total fell 14.2% from its “before” period (723,998 workers) to its “after” period (621,458 workers). But the numbers suggest that labor in Michigan has managed to improve its fortunes in the organizing and bargaining arenas.

Although unions in Michigan have filed fewer petitions with the National Labor Relations Board to represent new workers in the years since the right-to-work switch, they have won more actual representation elections, averaging 38 per year, compared with 32 previously. As a result, Michigan is seeing an average of 1,957 newly organized workers per year since 2013, up from 1,282 in 2006-2012.

Unions have negotiated a yearly average wage hike of 2.01% in the “after” period. That’s small compared with most other states, but it’s a full percentage point higher than it was before the state switched to right-to-work.

However, the gap between union wages and nonunion wages has narrowed. In 2013-2018, union members earned an average of 13 percent more per hour than nonunion workers. In the years leading up to the switch, that gap was five percentage points wider. 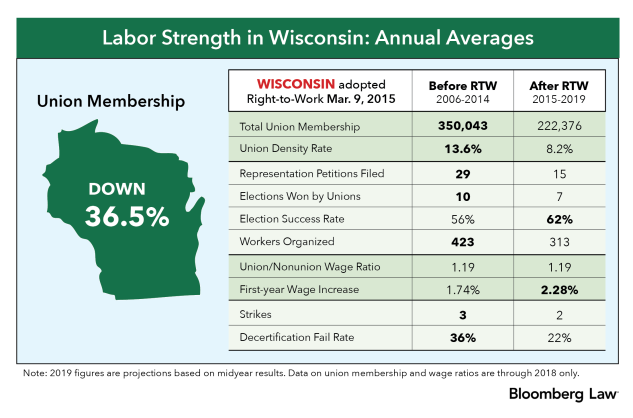 Unions in Wisconsin, the most recent Midwestern addition to the right-to-work club, have taken the biggest hit of the three since making the switch. With annual membership averaging 222,376 from 2015 through 2018, Wisconsin’s union ranks have declined by 36.5% from its earlier average of 350,043.

Like the other two right-to-work states, Wisconsin has seen an improvement in its negotiated wage hikes, from an annual average of 1.74% in the “before” period to 2.28% in the “after” period. That’s the highest increase of the three, in fact. As in Indiana, the average wage gap between union and nonunion workers remained constant over time.

But the numbers suggest a diminished workplace presence for unions in recent years. There’s the slowdown in strike activity, to an average of two per year. But there’s also the “decertification fail rate,” which gauges how well unions have held on to their bargaining units in the face of challenges filed with the NLRB.

In Wisconsin, in the years before the right-to-work switch, unions won an average of 36% of their decertification elections at the NLRB, meaning that they successfully fended off more than one-third of decertification attempts. But in the years since, the average has fallen to 22%. Similar drop-offs occurred in other states as well, suggesting a lapse in labor’s momentum following their adoption of right-to-work laws.

Based on these figures, it’s easy to see some demarcation between pre- and post-switch labor performance in these right-to-work states. Union membership, activism, and staying power are down in all three states. Meanwhile, two states are also down in organizing but up in earnings, while Michigan has experienced a mixed bag of results.

But do these trends differ from those in the states that didn’t make the switch? Let’s bring our non-right-to-work states—Illinois, Minnesota, and Ohio—back into the mix and find out.

Of course, since these states have no right-to-work pivot point in their pasts, there’s no way to compare a “before” period to an “after” period. So instead, let’s take a side-by-side look at each group’s statistics through the years. I’ve run the numbers for 10 different metrics, and here are the four that I feel tell the most complete story.

The first comparison shows how each state’s union density—its total union membership as a percentage of its labor force—has changed from 2006 to 2018.

What’s more, the largest one-year drops in Indiana and Wisconsin were in the years that they actually adopted right-to-work. (The rate fell in Michigan too during its switch year, but by a relatively small degree.) In fact, Wisconsin’s 2015 decline was the largest one-year fall for any of the six states, and Indiana’s 2012 decline was the third-largest (behind Michigan’s in 2010.)

The three non-right-to-work states, on the other hand, experienced no one-year drops as steep as Indiana’s or Wisconsin’s when they switched (although Illinois did come close a couple of times). The overall placidity of the chart for these states serves as a counterpoint to the volatility and the downward trajectory of the chart for the right-to-work states—especially once the new law made its appearance.

The number of representation petitions submitted to the NLRB to hold a union election is a reliable gauge of union activity, regardless of whether those petitions lead to a successful election—or even reach the election phase at all. That’s because petitions reflect labor’s effectiveness at getting its message out to unorganized workers in nonunion workplaces.

All six states experienced declines in petition activity—par for the course, nationally speaking. But unlike the union density figures, these charts show that non-right-to-work states have seen more of a drop over time than their right-to-work counterparts.

Even though petitions fell in each year that Indiana, Michigan, and Wisconsin switched to right-to-work, these were relatively small one-year drops. Indeed, for all three states, the larger declines in petitions occurred mostly before the switch, not after.

If there’s any conclusion to draw from these charts, it’s that the decline in the number of petitions filed most likely depends less on right-to-work laws than on state population. Illinois, Ohio, and Michigan, which showed the steepest overall declines, are also the three states with the most union workers. Statistically speaking, when a state has more, it has more to lose.

Once a petition for union representation does make it to the election phase, labor’s hand is strengthened. Flying in the face of the overall nationwide trend toward lower membership and fewer petitions and elections, the election win rate for unions just keeps getting higher, reaching an all-time high of 77% at midyear 2019.

The charts for the union win rates in the six states studied here show a more muddled picture, but one that doesn’t appear to hinge on whether, or when, a state adopted right-to-work status.

In each trio of states, there’s a state that showed double-digit growth in unions’ election success from 2006 to 2019 (Michigan and Illinois), a state that showed more modest growth (Wisconsin and Minnesota), and a state that actually showed a decline in the win rate over the time (Indiana and Ohio).

As for the impact of right-to-work, unions in those three states actually boosted their win rates during their switch years, and enjoyed some of their healthiest gains at the ballot box in the years afterward.

The three right-to-work states have largely followed this trend. In all three, the union/nonunion wage ratio was somewhat lower in 2018 than in 2006. For two of the states, Indiana and Michigan, the switch to right-to-work status saw an accompanying drop in labor’s wage advantage, and an overall decline in the years since. Wisconsin, however, reported a brief spike in the pay gap in 2015, before falling again and finishing with an overall decrease.

As with other metrics, there’s more uniformity among the three states on the non-right-to-work side. The results for Illinois and Minnesota reflected an overall increase in the pay ratio since 2016, while Ohio showed a decrease. But for the most part, the wage ratios for all three have flowed in similar directions over the years, ending on a relative high note for unions.

A quick note about some of the other metrics, which I chose not to include as charts here:

In this analysis, I looked at our labor data from three states that had adopted right-to-work laws in recent years to see if that legal move had changed unions’ fortunes within those states. I compared the data from before and after the switch, and also compared the data between these states and three similarly situated states.

Both sets of comparisons provided strong evidence that the introduction of right-to-work had a negative effect on these states’ union headcounts in terms of membership, density, and coverage.

As for other factors—such as organizing, bargaining, earnings, and strikes—I was unable to isolate right-to-work as a consistently reliable game-changer. While the right-to-work states showed marked declines in many of these areas after adopting such laws, they didn’t differentiate themselves fully from the states that didn’t adopt them.

Together with my earlier analysis, this exercise has yielded statistics fit to fuel arguments on either side of the debate on right-to-work laws. If the current trend toward adopting such state laws continues, a future revisiting of our databases might yield more definitive results.