Eleven deforestation proposals have appeared on companies’ proxy statements since the beginning of 2016, according to Bloomberg data. Although only two of those proposals have passed, they are the most recent two—which might point to a new shift in shareholder attention to deforestation-related risk in companies’ supply chains. 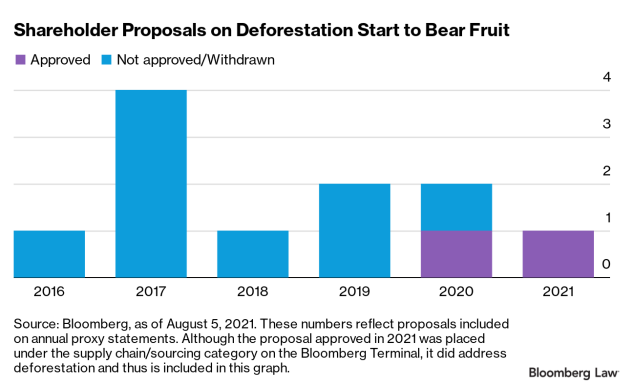 Last October, 68% of P&G shareholders backed a proposal requesting the company “report on efforts to eliminate deforestation” from its forest pulp and palm oil supply chains. This was the first time that a deforestation-related proposal had ever passed, stopping a run of nine straight shareholder losses. (The Bloomberg data covers 2016–present.)

Notably, large investment firms including Vanguard and BlackRock backed the P&G proposal.“P&G was facing reputational risks and competitive disadvantages because of scrutiny of its deforestation-related practices and changing consumer preferences,” Vanguard said.

In May 2021, 99% of Bunge Ltd. shareholders voted for a proposal asking the company to report on “its efforts to eliminate native vegetation conversion in its soy supply chain.” Native vegetation conversion is a key driver of deforestation in Brazil. According to the proposal, continued exposure to deforestation could result in increased material financial risks for the company, such as limited access to capital. The company’s board also supported the proposal.

To better evaluate the risks that deforestation-related practices can incur, investors need quality data—but quality data is still lacking. “Data gaps currently prevent financial institutions from assessing their nature-related risks,” David Craig, who co-chairs the Taskforce on Nature-related Financial Disclosures (TNFD), said in a June 5 press release. In 2023, the TNFD will launch a framework similar to that of the Taskforce on Climate-related Financial Disclosures (TCFD) to help companies “report and act on evolving nature-related risks” and close data gaps. By then, we may see proposals asking companies to report on deforestation risks in line with the TNFD framework.