2021 M&A and investment data show a surge in deals involving entities with a nexus to crypto—a reflection of both the record levels of deal activity this year and the broader trend of more and more businesses taking an interest in cryptocurrencies and crypto-assets.

Year to date, 577 deals involving at least one party with “crypto” included in its entity description have been announced and have closed or are currently pending. That’s the highest total for such deals since they began to show up at a noticeable level around 2017. The aggregate value of these deals is $25.5 billion, also an all-time high. $14.7 billion of this volume consists of venture capital investments, up from a total of $3.2 billion in 2020. 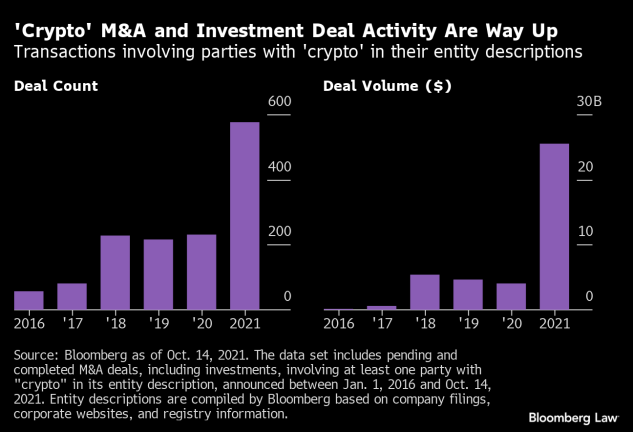 Entity descriptions are compiled by Bloomberg based on company filings, corporate websites, and registry information. Our search for pending and completed deals involving parties with the term “crypto” appearing in their entity descriptions captured mentions of terms including the prefix, such as “cryptocurrency” and “crypto assets.”

Because more and more entities are getting involved in the world of crypto, the deals captured by our search criteria aren’t limited to businesses that are primarily focused on crypto; they also include deals involving entities that you might not think of as crypto businesses per se but have some crypto connection. (At the same time, a deal involving a party that has a nexus to crypto but doesn’t explicitly have “crypto” in its entity description might not have been captured by our search.) For example, the largest of these deals announced in 2021 was the $3.4 billion minority stake investment in Robinhood Markets Inc. by a consortium led by Ribbit Management Co LLC—captured by our search because of Robinhood’s cryptocurrency offerings.

$12.6 billion of this year’s crypto deal volume has involved technology sector targets, and $7.6 billion have involved financial sector targets. Both are small fractions of total M&A in these sectors, which have each seen over a half a trillion in deals each so far in this boom year.