Unions have been uncharacteristically slow to stage traditional, wide-ranging workplace strikes amid the snowballing health and economic crisis caused by the coronavirus pandemic. But that lack of formal action appears about to change. 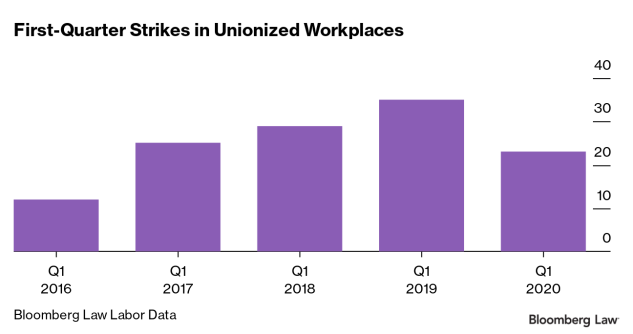 Labor leadership was certainly busy in the early weeks of the outbreak, but its role mostly revolved around supporting and promoting workplace protests that have sprung up organically by employees required to remain on the job while most of the workforce stays at home.

Most of these protests have stopped short of being defined as “strikes” by their union leaders. For example: an impromptu rally by Pittsburgh sanitation workers demanding hazard pay and better personal protective equipment; a pair of silent demonstrations at a General Electric factory in Lynn, Mass., to complain about safety conditions and to agitate for switching production to ventilators; and a single-shift walkout by 19 painters at a Fiat Chrysler plant in Warren, Mich., to protest the company’s response to worker illnesses.

The lack of union activity doesn’t mean that there haven’t been coordinated, large-scale strikes in these turbulent weeks. Quite the opposite: Work stoppages have made headlines almost every day. But most of these walkouts have been organized by unorganized workers—that is, employees in nonunion companies.

In late March, strikes to protest unsafe conditions were staged by workers in such nonunion workplaces as Amazon warehouses in Staten Island, New York; Amazon-owned Whole Foods grocery stores in Chicago and other areas; and Perdue poultry plants in Georgia. Even gig workers delivering groceries for Instacart called for a work stoppage.

Along another front line of the pandemic, nonunion cooks and cashiers at certain McDonald’s and other California restaurants April 9 expressed their health and safety concerns by walking off the job and into their cars to form rolling, safe-distance picket lines, which has become the method of choice for today’s safety-conscious striker.

One reason why most of the coronaviurus-related strike activity has taken place outside of organized labor, rather than within, is that it’s easier for nonunion workers to walk off the job, as long as they do it together.

Under these protections, any of the non-union-represented workers mentioned above can band together in this way—except for the independent contractors at Instacart, who are technically not employees—without the need to go through union leadership. (That said, this did not stop Amazon from firing the worker who organized its Staten Island strike. But New York’s attorney general has asked the NLRB to investigate the incident.)

Many union employees, on the other hand, are limited by certain “no-strike” clauses in their collective bargaining agreements. These provisions restrict a union local’s ability to call a strike while the CBA is in effect. Although there are exceptions to these clauses that adept labor leaders can use if needed, it is often a wise choice to let some protests occur on a grassroots level. As long as they don’t rise to the level of a wildcat strike—that is, a full-on strike not called by union locals, which can raise doubts about that local’s ability to represent its workers—such protests can give unions the cover they need to advocate for their workers without triggering claims of unfair labor practices.

Union Activity Is Gearing Up

As the crisis wears on, however, unions have started taking charge of workers’ protest actions more frequently, and on a larger scale than before.

The Carpenters’ union’s North Atlantic States Regional Council led a strike April 6 that idled more than 10,000 carpenters in Massachusetts. Also April 6, National Nurses United coordinated walkouts at 15 HCA Healthcare-owned hospitals in six states. And at GE, the Communications Workers of America leveraged that earlier protest in Lynn into a series of April 8 demonstrations in factories across the country.

A Ceiling for Rising Strike Totals?

Is this the beginning of a rise of union unrest? Perhaps. A closer, month-by-month look at our work stoppage data does reveal the beginnings of an upturn. 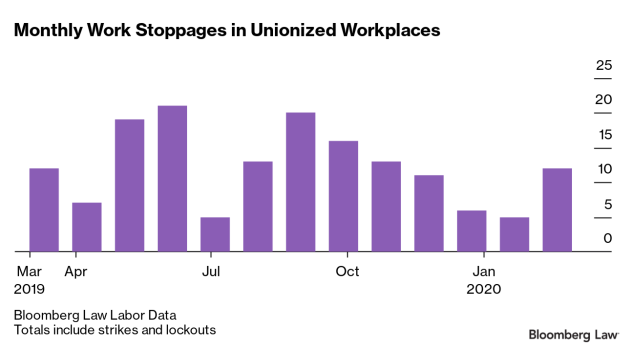 There were 12 such stoppages reported in March, reversing a pattern of monthly decreases that went all the way back to September. What’s more, of the five strikes that began since the World Health Organization’s March 11 announcement classifying the Covid-19 outbreak as a pandemic, four cited coronavirus-related health and safety issues as points of contention.

Amid these signs of growth, however, it is important to note that rapidly falling employment levels caused by the pandemic have created a ceiling to how many strikes we might expect to see. Workers cannot strike if they have been furloughed, or let go completely.

That is why, in the future, unions might be more likely to go the way of Teamsters Local 705. The enormous Chicago-based local last week called on its thousands of members to vote on allocating up to $2 million to extend health benefits to members who have been laid off as a result of the crisis. If the measure is approved, the money will come directly from the local’s strike fund.