The SEC will kick off a new process for handling requests to exclude shareholder proposals this upcoming proxy season. Starting in 2020, the agency may no longer provide written responses to shareholder requests.

When a company seeks to exclude a proposal, the staff informs the proponent and the company of its position on the request. The staff may concur, disagree or decline to state a view with respect to the company’s asserted basis for exclusion. This has been and will be the basic outline of the process.

What will make this year different, however, is a new Division of Corporation Finance policy. The staff announced in September 2019 that, as of the upcoming proxy season, it may respond orally instead of in writing to some no-action requests. The staff “intends to issue a response letter where it believes doing so would provide value, such as more broadly applicable guidance about complying with Rule 14a-8.”

The policy shift will result in a slight restriction of the flow of information to the public. The change will be less than consequential because staff responses have not historically been a source of extensive useful analysis by the staff. Many letters finding for the company provide little information or insight beyond “There appears to be some basis for your view that the Company may exclude the Proposal under ...” Similarly, when the staff requires inclusion, the response is often limited to “We are unable to concur in your view that Dow may exclude the Proposal under ...”

The staff will also make some information about the disposition of exclusion requests available in chart form, as shown below. The chart, which was current as of November 26, 2019, will identify the company, the proponent, the relevant dates, the staff action taken (concur, disagree or decline to state a view), the regulatory basis for exclusion and whether the staff issued a written response. In some instances, the the chart may actually make it easier for interested persons to search for staff responses. The chart will show the particular subsection of the rule used by issuers in all cases. The previous staff web page required the reader to open a letter to determine what subsection was in play.

Currently, the staff has included only two dispositions on the chart: one with a written letter and one that was orally communicated. The issuers sought exclusion in these requests based on some relatively noncontroversial provisions of the rule. One involved Rule 14a-8(i)(2), concerning whether the proposal would be violative of any state, federal, or foreign law, while the other relied on Rule 14a-8(b) and (f), dealing with the eligibility requirements. It will be very interesting how the staff deals with more hotly contested matters, such as the ordinary business exclusion and executive compensation. 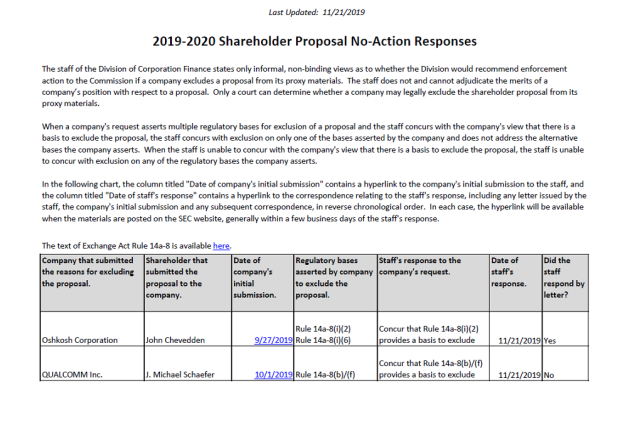 Glass Lewis & Co. LLC, one of the two leading proxy advisory firms in the market, addressed the new division policy in its overview of the firm’s advice on shareholder initiatives. The first piece of advice concerns dispositions when the staff declines to take any particular view. The firm stated that it believes that companies should only omit proposals only in cases where the SEC staff has explicitly concurred with the company’s asserted basis for exclusion. In instances where the SEC has declined to state a view on whether a shareholder resolution should be excluded, the firm stated “that such proposals should be included in a company’s proxy filings,” and added that “a failure to do so will likely lead Glass Lewis to recommend that shareholders vote against the members of the governance committee.”

Similarly, in instances where the SEC has orally permitted a company to exclude a shareholder proposal and there is no “written record” provided by the SEC about the determination, Glass Lewis believes that the company should provide “some disclosure” concerning the staff action. If the company does not include a proposal on its ballot and does not provide this disclosure, the firm will generally recommend shareholders vote against the members of the governance committee of the board.

Glass Lewis issued its guidelines before the SEC published the chart discussed above. The firm has not addressed the SEC action to date, but it is possible that the staff chart discussed above could be considered a “written record” that is sufficient to preclude the need for proxy statement disclosure.

Institutional Shareholder Services Inc., the largest proxy advisory firm, did not discuss the policy shift in its recent guidelines.

On November 5, 2019, the SEC, by a 3-2 vote, proposed sweeping changes to the eligibility requirements for proponents and the resubmission thresholds for proposals previously put to a vote. Under the current rule, to be eligible to submit a proposal, a shareholder must have continuously held at least $2,000 in market value or one percent of the company’s securities (which never happens) for at least one year. The rule as proposed would extend the holding period out to three years. In addition, proponents would be eligible if they have held $15,000 of the company’s securities for at least two years, or $25,000 for at least one year.

With regard to resubmissions, companies may currently exclude a shareholder proposals based on vote totals for dealing with matters previously included in the company’s proxy materials and voted on at least once in the previous three years. Such proposals may currently be excluded if they did not receive at least 1) three percent of the vote if previously voted on once; 2) six percent of the vote if previously voted on twice; or 3) 10% of the vote if previously voted on three or more times. The proposed changes would replace the current resubmission thresholds of 3, 6 and 10% with new thresholds of 5, 15, and 25%, respectively. In addition, the proposal would add an additional provision that would allow companies to exclude proposals that have been submitted three or more times in the preceding five years if they received more than 25%, but less than 50%, of the vote and support declined by more than 10% from the immediately preceding vote.

The proposals drew vigorous dissents from Commissioners Robert Jackson and Allison Lee. Commissioner Jackson stated that the proposals “limit public-company investors’ ability to hold corporate insiders accountable,” while according to Commissioner Lee, “there is a stark divide between issuers and shareholders on the policies reflected here.” She added that “the bottom line is that these policy choices, if adopted, would shift power away from shareholders and toward management.”

The proposals have generated a significant number of comments this week, including comments from leading shareholder advocates and investment managers. Many commenters have urged the Commission to extend the current 60-day comment period to 120 or 180 days. As the Council of Institutional Investors stated, the SEC should extend the comment period because the proposals are complex, call for supporting data and “would result in the most significant changes to the voting rights of shareowners in decades.”

The comment letter from ACTIAM, one of the largest investment funds in the Netherlands, with more than €60 billion in assets under management, made what will likely be the typical case in opposition to the proposals. ACTIAM stated that the shareholder proposal process has served to benefit issuers and proponents alike as “an effective, efficient and valuable tool” for management to gain a better understanding of shareholder priorities and concerns. According to the firm, the proposed rule changes “will make companies far less accountable.” The increase in ownership thresholds would, according to the firm, make it difficult for smaller investors to voice their concerns, and the proposed increase in resubmission thresholds would “unnecessarily exclude important proposals that gain traction over time, and will ultimately stifle key reforms.” Opponents of the changes will also likely argue that the process is not unduly burdensome, given the relatively small number of proposals even the largest companies seek to exclude (as shown on the chart below).

The public will have less information about the no-action letter disposition process under the new policy adopted by the Division of Corporation Finance. This will likely not be a sea change, however, given that the division’s previous utterances on shareholder proposals have not exactly been fonts of insights. The new chart published by the division will at least make some information available to the public.

With regard to the proposed eligibility changes, given the strong support of Chairman Clayton and Commissioners Peirce and Roisman, it is likely that the measures will again pass by another 3-2 vote. The heightened demands will no doubt hamper the ability of smaller investors and their prominent advocates to engage in the process. The landscape in this area would change tremendously under these revisions. As leading shareholder advocate James McRitchie stated in his comment letter, the four largest investment firms have never submitted a shareholder proposal. He added that the proposed rule changes “would significantly reduce the spread of long-term focus and best practices generated by proposals submitted by ‘gadflies’ like myself to make corporations more democratic.” 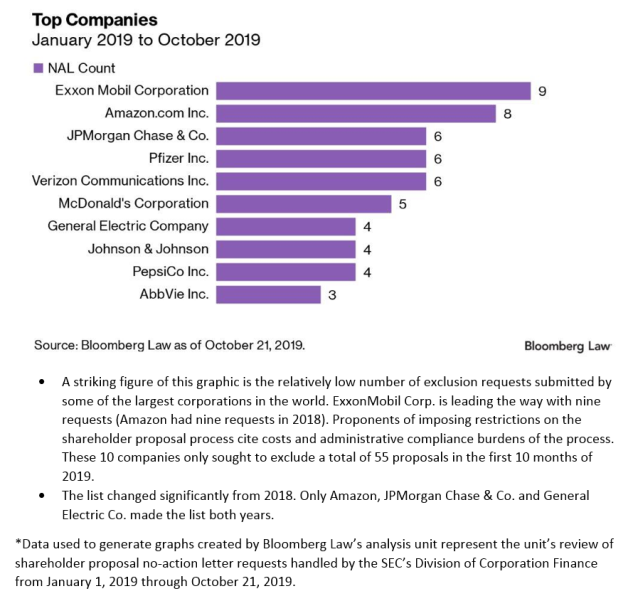