Beijing as seen from the Great Wall of China.
Photographer: Nicolas Asfouri/AFP/Getty Images

From trade wars to tariffs and isolation, actions of the U.S. Government could be accelerating long-term declines in U.S. intellectual property (IP) interests. Creating barriers between the U.S. and global markets could limit short-term revenues and solidify China—already showing a dramatic upsurge in IP filings—as a major IP competitor.

A look at the current, and shifting, IP landscape shows that Chinese IP owners are exerting growing influence in their critical economic market.

U.S. IP receipts—calculated from the authorized use of the proprietary rights associated with patents, trademarks, copyrights, industrial processes and designs including trade secrets, and franchises—accounted for more than half of global IP receipts in 2000. That share has steadily declined in the years since 2000 to 35% in 2018.

Japan and the European Union are also substantial recipients of IP revenues. Combined Japanese, European Union, and U.S. IP receipts have fallen from 92% to 86% over the same period. 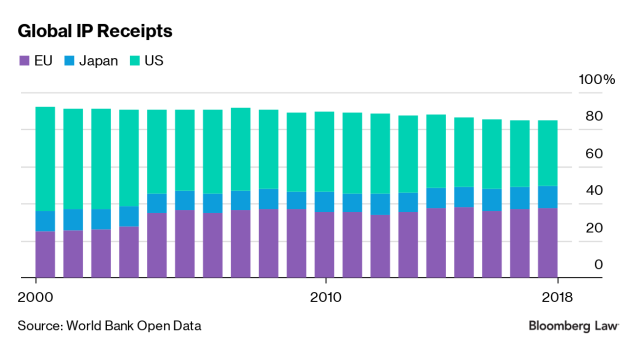 Meanwhile, over the last ten years, Chinese businesses have made aggressive moves in both acquiring and utilizing IP.

China has tripled its IP revenues over the last two years, but still only accounts for around 1.5% of global receipts. The World Bank reported 2017 Chinese residential IP filings—i.e., filings by a resident assignee or resident applicant—as more than the residential filings of all other countries combined. These IP filings included patents, trademarks, and industrial designs. 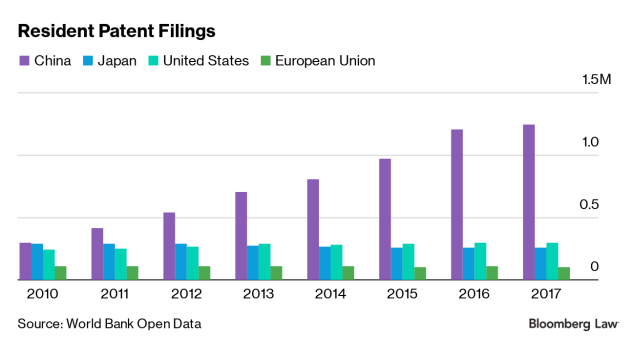 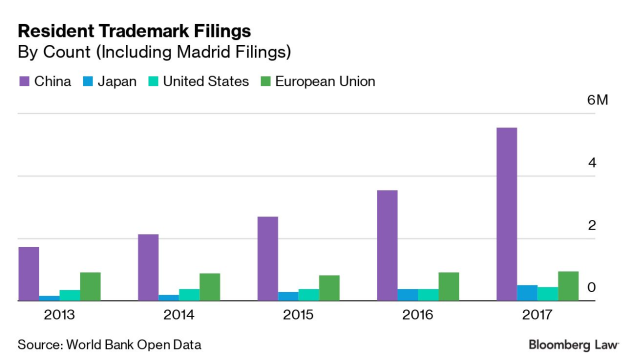 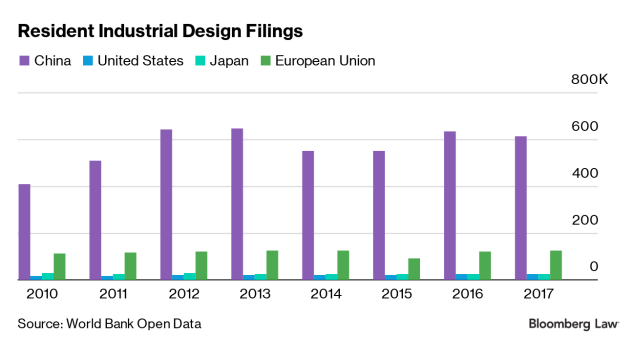 From 2016 to 2018, IP receipts attributable to Chinese residents and Chinese companies have grown from just over one billion U.S. dollars to a little over five and one-half billion. Given the intensity of IP filings within China, and the market potential within the region, it is reasonable to assume that receipts will continue to grow, and at a comparable rate.

The Asia/Pacific market is the largest, and one of the fastest growing, markets in the world. China and India, the only countries that have populations of over a billion people, represent more than a third of the world’s population, but account for less than 2% of global IP receipts. This is changing rapidly, and if growth trends in the film and gaming industries are any indication, China’s IP receipts will continue to increase rapidly. India’s IP receipts could follow that growth, but at a slower pace. 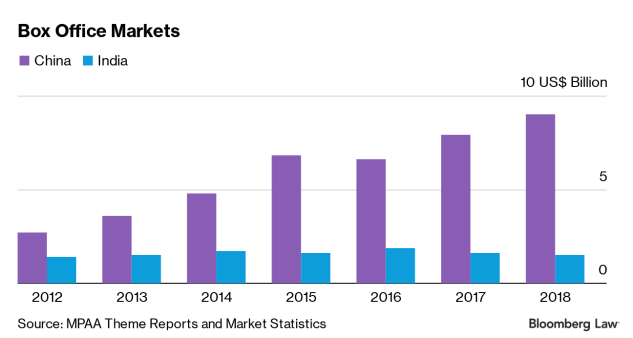 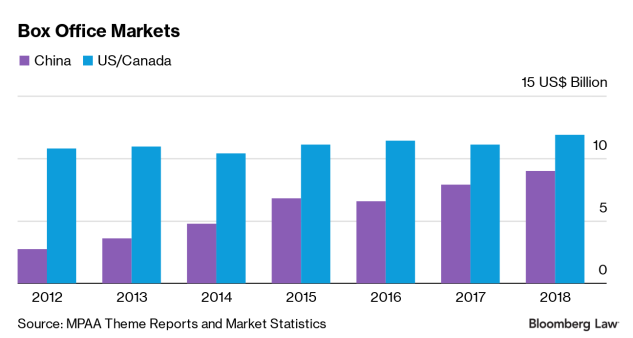 Music revenues have grown in the last four years, but 2018 revenues are only 80% of 2001 revenues. Sales have shifted over the last 18 years from primarily physical media (vinyl, cassette, CD) to digital media (download and streaming). 2014 appears to have been the year that digital media supplanted physical as the format leader. 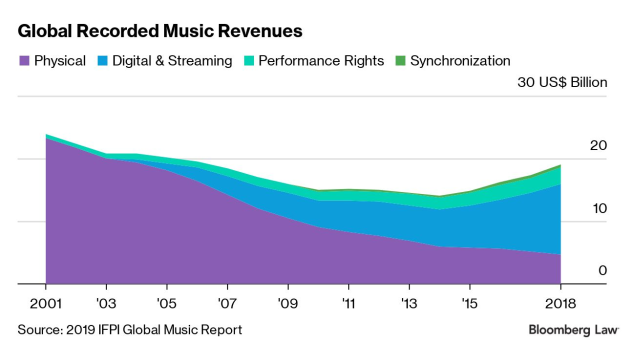 The transition into digital format creates opportunities and pitfalls for music producers. Distribution of digital-format music is easier, as the number of physical records/cassettes/CDs created and delivered to individual stores does not need to be approximated and optimized. Obscure, offbeat bands will be available if included within the streaming/downloading service. Consumers do not have to wait in line on release day at the music store to avoid the risk of a hot album selling out.

But along with ease of distribution come problems in establishing a payment structure. The 2014 dip in revenues shows an inflection point where digital revenues covered, and overcame, the losses associated with reduced physical sales.

China has the most smartphone users, at around three-quarters of a billion users. That is more than the U.S. and India combined. If phones have become the “record store,” China has around 30% of those stores.

Asia/Pacific was the largest market for video games from 2015 to 2019. Percentages stayed generally static over the five years, and the U.S. and China were consistently the top country markets. 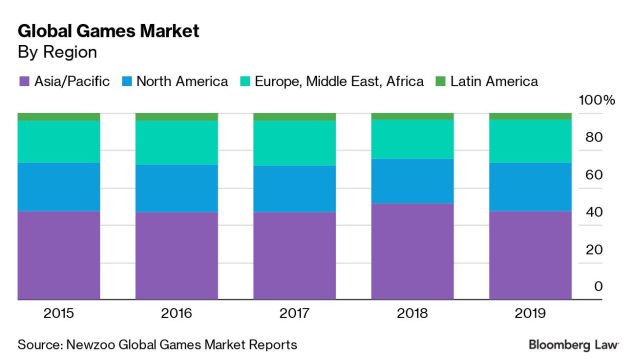 Chinese companies might not yet account for a significant portion of IP revenues, but the Chinese government was recently responsible for fluctuations in the video game market. The Chinese market grew by over 10 billion US$ from 2017 to 2018, separating itself from a generally comparable U.S. market by over 7 billion dollars. The trend tempered when the Chinese market lost around 1.4 billion dollars in 2019.

It is likely that the decrease in the Chinese market is attributable to a temporary license freeze and establishment of an Online Game Ethics Committee at the end of 2018. This downturn might show weakness in the Chinese market, but it also shows the global gaming market’s dependency on the Chinese market. A Bloomberg article by Yuji Nakamura cites a long-time gaming analyst, Pelham Smithers, as predicting the first fall in gaming revenues since 1995, and cites China’s regulatory practices as one of three major factors for this downturn.

3. Shift in the standings

Establishing tariffs on Chinese-made goods might force sellers to seek manufactured goods and components from countries other than China. Without Chinese manufacturing, many companies will not be able to justify acquiring and maintaining IP protections in China. That shift might temporarily protect trade secrets and other vulnerable U.S. ideas, assisting U.S. businesses with maintaining R&D and other vulnerable IP-related assets in a safer environment. However, this scenario also creates a vacuum that other, non-U.S. companies will fill.

The growing rate of IP filings in China, by Chinese companies, suggests that Chinese companies are planning to fill any gap that the U.S. leaves. Current U.S. policy appears to trade a short-term harm to Chinese manufacturing for a long-term gain in Chinese IP.